Week Ahead – Markets Wind Down, Mind the Liquidity Gap

As the year draws to a close, liquidity could be in short supply next week. This means that sharp market moves are possible without any news behind them. The economic calendar is pretty light, so the spotlight will remain on Omicron developments and President Biden’s spending promises.

We have already published our expectations for the FX market in 2022, which you can view here. In short, the three main forces that will drive currencies are changes in central bank policy, swings in risk sentiment, and politics.

It may be a year of two halves, with the dollar performing well early on but then losing its shine as ‘peak inflation’ in the US dampens expectations for powerful Fed rate increases and the Eurozone recovery finally gets rolling. And with liquidity being withdrawn from the global financial system while asset valuations are so high, volatility episodes could become a more frequent phenomenon. 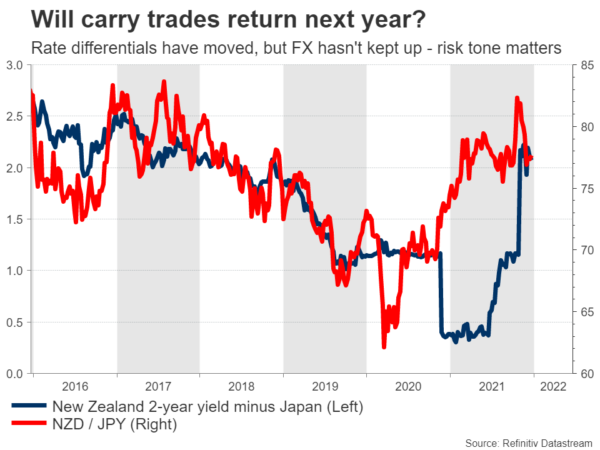 Hence, while rate differentials favor currencies like the Canadian and New Zealand dollars that will likely benefit from carry trades as their central banks raise rates, the ride could be violent. Beyond the global risk tone, politics will also add some spice into the mix, with French presidential elections and the US midterms coming up.

The upcoming week is exceptionally quiet in terms of data releases. With many big players having closed their books for the year and many others away on holiday, trading volumes will likely be very low.

This is a recipe for all sorts of strange market moves, from sharp spikes without any news behind them to outright flash crashes if any real news hits the wires, particularly during the Asian trading session.

The last time this occurred was on January 3, 2019. That’s when yen pairs got smashed in a few minutes as trading algorithms overreacted to a headline about Apple. Once the yen started moving, separate momentum algos amplified the action, before the entire move retraced in the next hours.

One strategy for taking advantage of such liquidity-driven moves is setting pending orders that are far away from current market prices. In an ideal scenario, the order gets executed at extreme levels, and then the market retraces.

The few data that will be released will come mainly from Japan and China. Things will get going on Monday with Japan’s retail sales for November and the Bank of Japan’s summary of economic opinions. Employment and industrial production stats will hit the markets Tuesday. 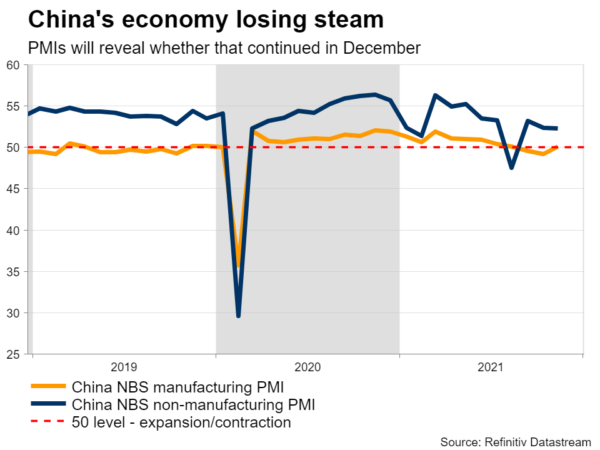 As usual though, the yen doesn’t react to economic data or comments from the central bank. The nation has barely escaped deflation and there is absolutely no expectation that rates will rise in the coming years. Hence, the yen remains at the mercy of global risk appetite and what foreign central banks do.

Then on Thursday, the weekly jobless claims from America are due out, ahead of China’s official PMIs for December early on Friday. The PMIs can often be crucial for China-sensitive currencies like the Australian dollar, especially in light of the troubles in the property sector and the slowdown in the economy.

All told, it will probably be a very quiet week. That said, if we do get any real news, the impact could be much greater than usual.