EURGBP sellers have remained in control for more than a week, exacerbating a downward move beneath the Ichimoku cloud after the 200-day simple moving average (SMA) curbed recent attempts of the pair to advance. The relatively flatlined SMAs are endorsing a sideways trajectory and are making it difficult for the price to boost upside momentum.

The Ichimoku lines and the cloud are not hinting of a clear price direction, while the short-term oscillators are exhibiting mixed messages regarding the bearish tone in the pair. The MACD is signalling that negative momentum is growing as it falls south of the zero threshold. That said, the RSI is gliding in bearish territory but is reflecting that buyers are starting to fight back, while the stochastic oscillator is implying that the pair may surrender more ground. This is backed by the stochastic lines, which are sustaining their negative charge in the oversold territory.

If the down move endures, initial support could occur at the near 21-month low of 0.8378. Steering underneath this barrier the pair may tilt increasingly negative, hitting a key low from back in February 2020 at 0.8338 before challenging the now critical support of 0.8276-0.8300. This aforementioned support took shape with the 41-month trough in December 2019 of 0.8276 and the soon followed trough of 0.8281. Nonetheless, a break beneath this would bolster negative tendencies bringing the test of the 0.8205-0.8248 support band into play, which was formed by the lows from the end of June until mid-July 2016.

Alternatively, if buying interest intensifies, the bulls will encounter a fortified zone of resistance approximately extending for a full base point from the 0.8453 low until the 0.8550 high. This section comprises of congested resistance obstacles from the SMAs, the cloud and the Ichimoku lines. So, in the event the bulls muster a profound upward force to conquer this, they may then thrust for the 0.8600 handle. From here, another resistance band of 0.8643-0.8671, involving multiple peaks since May could negate buyers’ efforts to fuel the bullish bearing.

Summarizing, EURGBP is exhibiting a neutral-to-bearish tone beneath the SMAs as it trades in the vicinity of the near 21-month low of 0.8378. 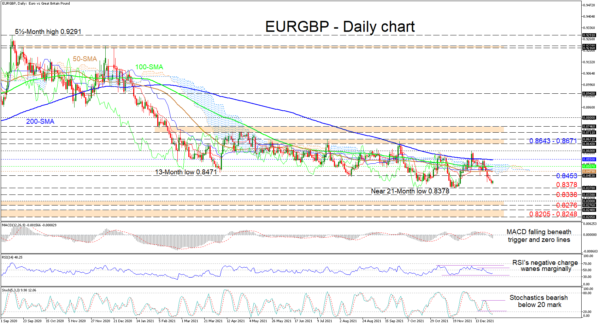