Overall outlook in the markets are unchanged, with US futures pointing to slightly higher open. DOW and S&P 500 could continue their record runs. Selloff in Yen remains the main theme while Sterling is strong together with Aussie and Kiwi. Euro and Dollar are both soft and bounded in range against each other.

Technically, a range breakout in EUR/USD is long overdue. But we’d probably wait till 2022 to happen. It’s rather hard to predict which side the breakout would be. Pure on EUR/USD’s technically, the down trend from 1.2348 should continue. This is in line with the outlook in EUR/GBP, EUR/CHF and even EUR/AUD. We’ll see. 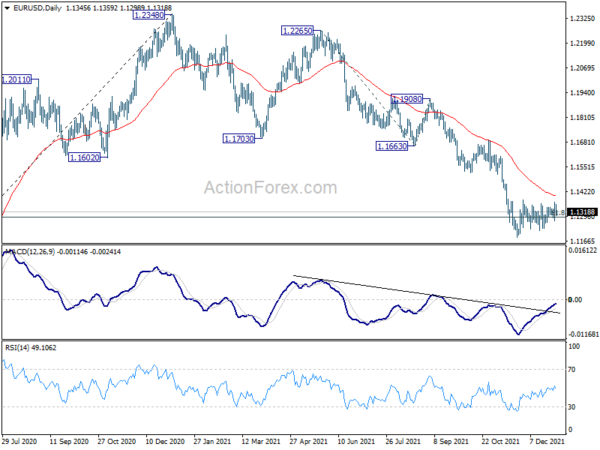 Happy new year our readers. We’ll be back on Jan 4.

US initial jobless claims dropped to 198k, lowest since 1969

Swiss KOF dropped to 107 in Dec, economy to develop positively at 2022 start

Swiss KOF Economic Barometer dropped slightly from 107.5 to 107.0 in December. “The barometer remains above its long-​term average,” KOF said. “The Swiss economy should thus continue to develop positively at the beginning of 2022, if the economic activity is not impaired by the renewed spread of the virus.”

“This month, the barometer is mostly influenced by indicators covering private consumption, which are slightly negative. Another slight negative contribution is sent by bundles of indicators from the finance and insurance sector. In contrast, indicators for foreign demand are contributing positively.”

ECB Governing Council member Klaas Knot said he had a “different view” to ECB’s projection that inflation will fall back to 1.8% after 2022. He said, “I think the chance we remain stuck above 2% is just as big. Not far above 2%, but still.”

Separately, another governing council member Ignazio Visco said, “(Inflation) forecasts below 2% in 2023-24 are of course subject to both downside and upside risks.

Intraday bias in GBP/USD remains on the upside for the moment. Current development suggests that corrective fall from 1.4248 has completed with three waves down to 1.3158, after hitting 1.3164 medium term fibonacci level. Further rise should be seen to 1.3570 support turned resistance. Sustained break there will further affirm this bullish case and target 1.3833 resistance next. On the downside, break of 1.3375 minor support will turn intraday bias neutral first. 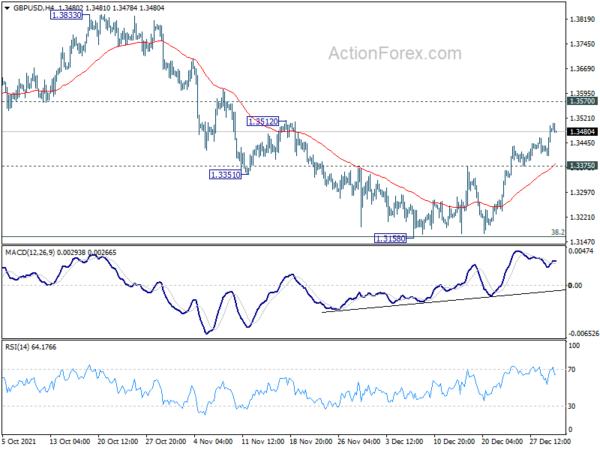 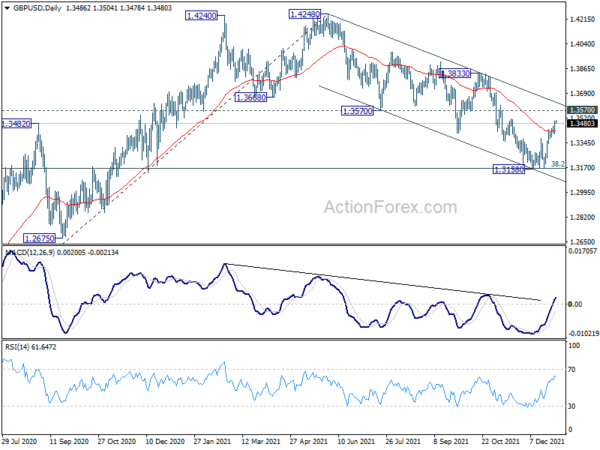