The Canadian dollar could face fresh volatility when December’s CPI inflation data come out on Tuesday at 12:30 GMT. Forecasts point to another pickup and investors are highly confident that the central bank could raise interest rates as soon as this month, though such a policy decision may not be straight-forward.

Canadian inflation is expected to have declined by 0.1% on a monthly basis in December, and while a deceleration would be somewhat a relief to the central bank at a time when pandemic risks continue to weigh on economic growth, a decline during the Christmas month has been a common phenomenon at least the past four years, making the headline and core CPI measures more meaningful to watch.

The headline CPI is expected to inch up to 4.8% year-on-year, marking a fresh two-decade high, after stabilizing around 4.7% in the preceding month. Investors will also closely look for similar upturns in the core measures, which exclude volatile energy and food prices, to figure out whether price pressures could become broadly irreversible without the central bank’s intervention. 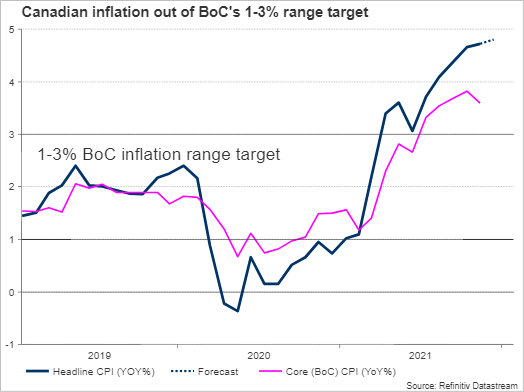 Notably, investors have set aside omicron fears, shrugging off the renewed round of mild restrictions in Ontario and Quebec during the past week, with the 10-year government bond yield surging closer to November’s peak on Monday. On top of that, analysts are strongly pricing in a 25-basis points rate hike with a probability of 75% during next week’s policy meeting. Four more could be delivered according to rate futures by the end of the year to drive the benchmark interest rate up to 1.75%. But despite the rate optimism, the central bank has been out of the spotlight since its previous policy meeting, providing little direction about whether it could hike its borrowing costs as soon as this week.

Having ended quantitative easing, policymakers acknowledged the inflation risk during their previous gathering in December, messaging that if the omicron variant “proves to be less of a health concern than initially feared” and should the labor market remain on solid footing, “there might be some room to reduce monetary support”.

The unemployment rate registered another decline since then, almost approaching its pre-pandemic levels, while business surveys reflected resilience in demand. Hence, perhaps another uptick in inflation would be enough to put the rate campaign into action next week, taking into consideration that the CPI inflation rate would be even larger if it included rising house prices. It is also noteworthy that the government has enabled applications for subsidies to businesses and workers recently, potentially minimising any downturns in business operations and consumer spending. 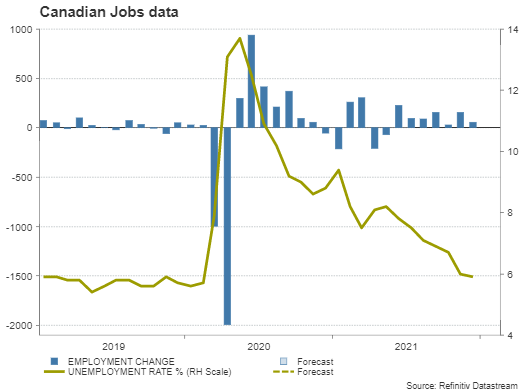 A rate increase next week would put the BoC ahead of the Fed in the tightening cycle, but the pandemic and inflation risks could still hang around. Therefore, the central bank would probably require more data evidence before hiking rates, making a spring decision a safer choice. Besides, it’s the BoC which tends to follow the Fed and not the opposite, making a negative surprise likely next week.

Nevertheless, stronger-than-expected CPI figures could bode well for the Canadian dollar amid the high rate hike expectations, likely putting dollar/loonie back in a downtrend below the 1.2500 level, with the 1.2430 – 1.2380 territory coming next into view.

Alternatively, weaker-than-expected inflation prints could play down a January rate hike scenario, sending the pair closer to 1.2600, where the neckline of the head and shoulder bearish pattern is positioned. Any close higher would snap the negative trend pattern, bringing the key 1.2700 mark under examination.