Sentiment Still Weak Despite Big U-Turn in US Stocks, Dollar Firm With Yen

US stocks staged a strong comeback overnight, with DOW staging the first-ever 1000-point-plus intraday U-turn. It’s down -1100 pts at initially trading but closed up 11 pts eventually. Yet, risk-off sentiment remains dominant in Asia. Dollar is currently the strongest, followed by Yen. Sterling is the worst performer, followed by Kiwi and Loonie. Aussie managed to pare back some losses after much stronger than expected consumer inflation reading. Overall, sentiment would remain vulnerable on developments surrounding Ukraine.

Head of Prices Statistics at the ABS, Michelle Marquardt, said the most significant price rises in the December quarter were new dwellings (+4.2%) and automotive fuel (+6.6%).

Marquardt said: “Annual trimmed mean inflation is the highest since 2014, reflecting the broad-based nature of price increases, particularly for goods.”

“Overall, the December survey results are consistent with an economy that’s starting to slow, with some similarities to the data when NSW and Victoria were first entering lockdown,” said NAB Chief Economist Alan Oster. “That probably means conditions will fall in early 2022. However, we don’t expect the Omicron variant to derail the recovery longer-term.”

BoJ Governor Haruhiko Kuroda told the parliament today, “the BOJ will continue its ultra-easy policy so improvements in corporate profits and the economy prop up wages and gradually accelerate consumer inflation.”

“We remain vigilant to the risk prices may shoot up before wages begin to rise, or how (rising raw material costs) could hurt smaller firms. We must keep an eye out on these risks, while maintaining our current easy monetary policy,” Kuroda said.

Meanwhile, Prime Minister Fumio Kishida said, “it’s desirable to create an environment in which companies can pass on rising costs and raise wages, so that increasing consumption spurs economic growth and inflation.”

Germany Ifo business climate will be the main focus in European session. UK will release public sector net borrowing. Later in the day, US will release consumer confidence and house price index.

Intraday bias in GBP/JPY remains on the downside as fall from 157.74 is in progress. Such decline is seen as the third leg of the consolidative pattern from 158.19. Deeper fall would be seen to 148.94 support next. On the upside, above 155.38 minor resistance will flip bias back to the upside for 157.74/158.19 resistance zone instead. 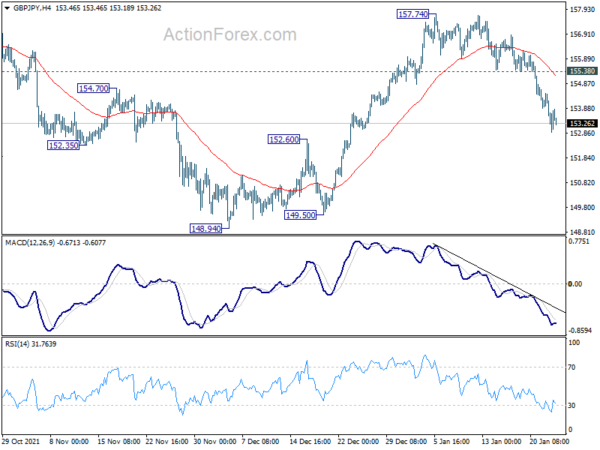 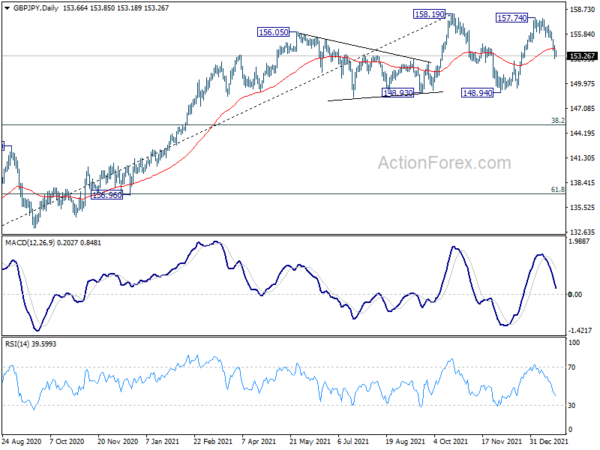