Headline CPI 1.3%qtr/3.5%yr; trimmed mean 0.97%qtr/2.6%yr, weighted median 0.95%qtr/2.7%yr. Core inflation is now above the mid-point of the RBA’s inflation target, not something the RBA was expecting in its forecast profile this early nor of this magnitude.

As we noted in the June CPI update, the acceleration to almost 4%yr was due to base effects of the negative prints in 2020 due to government grants and subsidies. As such, this was expected to be a transitory blip in inflation. This time the ending of the HomeBuilder grants are part, but not all, of the inflation story.

The ABS reports that most significant price rises were for new dwelling purchase by owner-occupiers (4.2% vs 4.8% forecast) and automotive fuel (6.6% vs 6.7% forecast) and domestic holidays (4.8% vs 5.1% forecast).

The ABS noted that high levels of building construction activity combined with shortages of materials and labour contributed to two consecutive quarters of the largest rise in new dwelling prices since the introduction of the GST in September 2020. As we noted in our preview, fewer payments of HomeBuilder grants compared to the previous quarter also contributed to the rise. These grants have the effect of reducing out of pocket expenses for new dwellings being purchased.

The strong rise in auto fuel was due to post lockdown surge in global demand and constrained supplies while domestic holiday travel & accommodation prices lifted as border closures eased leading to increased demand for domestic air travel and accommodation.

In our preview we argued there was a high degree of uncertainty about how the Black Friday and Boxing Day sales would unfold this year. Black Friday Sales are growing in their significance for Australian retailers but the December quarter was when the economy reopened in NSW and Victoria and retail sales surged as a result. As such there were solid gains in clothing & footwear (2.6% vs 0.1% forecast), household contents & services (1.1% vs flat forecast) and audio visual & computing (1.0% vs 0.3% forecast).

The ABS is also now publishing a wider series of analytical indexes to help understand the drivers of inflation. The ABS noted that the rise in automotive fuel and new dwelling prices were the main contributors to goods inflation. As noted earlier there were also increased across a broad range of other goods with strong demand and supply disruptions leading to price rises for goods such as furniture and motor vehicles. Goods inflation is running at a 4.3%yr pace, services at a 2.3%yr pace. There is the exact reverse of the trend we have seen for the past few decades.

We will process all this data and review of near-term CPI forecasts based on this new information. While we don’t know what the overall impact will be it is clear that at 3.5%yr the current pace of inflation is running ahead of where we thought it would be at the end of 2021 (3.2%yr for headline, 2.4%yr for the trimmed mean) pointing to upside risk to our June 2022 forecasts of 3.3%yr of the CPI, 2.9%yr for the trimmed mean. 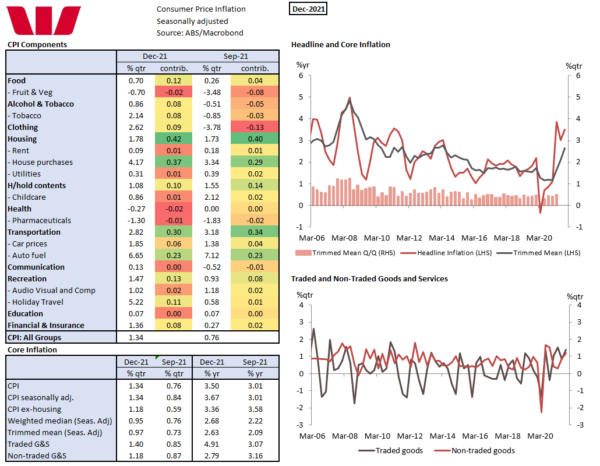