GBPJPY found strong footing around its longer-term 50- and 200-day simple moving averages (SMAs) this week, but the price could only gradually strengthen to 154.80 since then, unable to recoup January’s losses.

While the 50- and 200-day SMAs have escaped a bearish crossover, feeding speculation that the broad uptrend has not finished yet, the short-term outlook is still looking cloudy. Despite today’s buying appetite, the price continues to trade below its 20-day SMA at 155.68 and within the lower bearish Bollinger area. Moreover, the RSI has yet to climb above its 50 neutral mark despite its ongoing positive momentum, whilst the MACD remains muted below its signal line and around zero.

To summarize, GBPJPY is fighting for a soft positive weekly close as downside risks keep lingering in the background. An extension above 155.68 could eliminate any anxiety. 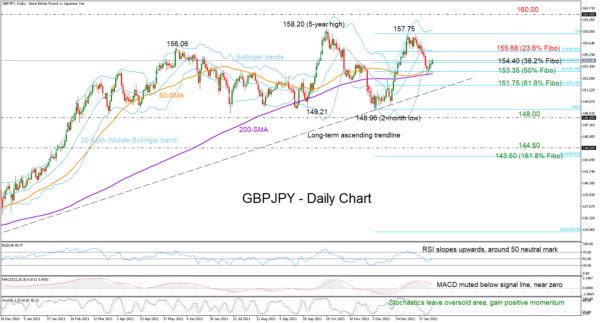