The Weekly Bottom Line: Fed Sets the Stage for Rates to Liftoff Soon

U.S. – Fed Sets the Stage for Rates to Liftoff Soon

The last week of January was rich on data reports, but the FOMC meeting absorbed much of the limelight. While the Fed left its policy rate unchanged, it delivered its clearest warning yet of imminent rate hikes. A March rate hike is now almost guaranteed, with market odds currently pegged at over 95%. That is likely just the start in what is sure to be a sequence of hikes. Concerns about future monetary tightening contributed to stock market volatility this week. Ultimately, the pace of rate hikes will depend on the pandemic, global supply chains and how aggregate demand reacts to higher rates.

The economy ended last year on a solid note, with a 6.9% annualized jump in fourth quarter real GDP. The acceleration in growth was powered by substantial inventory restocking. Inventories contributed 4.9 percentage points to the headline tally – accounting for over 70% of growth in the quarter (Chart 1). The inventory buildup was led by the retail and wholesale trade industries, with retail auto inventories leading the charge. Business investment (+2% annualized) and consumer spending (+3.3%) also contributed to growth, while a decline in government spending (-2.9%) was a small detractor. 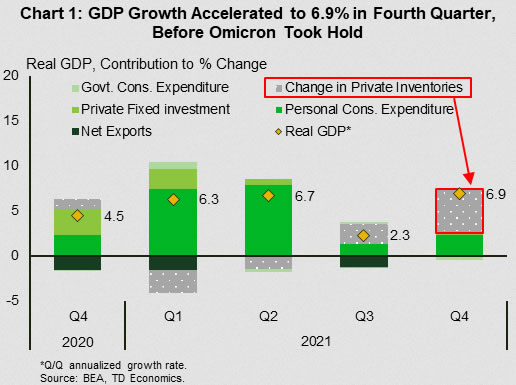 Last quarter’s strong showing largely reflects activity before the Omicron infection wave took hold. Other data this week also pointed to slowing economic momentum at the turn of the year. December’s personal income and spending report showed that real spending fell 1.0% on the month, due primarily to a pullback in goods spending. Services spending remained in positive territory, but spending at restaurants and bars declined, likely reflecting consumer caution due to the rapid increase in COVID-19 infections. Close-contact services are likely to see further weakness in January as high-frequency indicators point to softening in things like air travel. 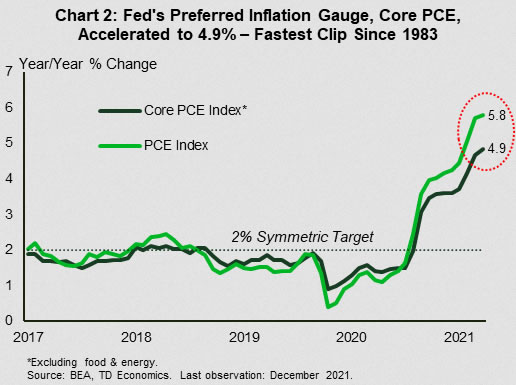 Second-tier data reports also point to slower near-term growth. Pending home sales fell 3.8% in December, marking the second consecutive monthly decline for the series. Pending sales lead actual (closed) sales by 1-2 months, with the recent weakness pointing to a soft start to the new year. A dearth of housing inventory is a key factor behind the weaker year-end trend. Looking at the start of this year, higher mortgage rates and uneasiness among prospective buyers during a surge in COVID-19 infections, are also likely to weigh on activity.

The good news is that the Omicron wave is likely to prove a temporary hurdle to economic activity. New infections in the U.S. appear to have crested. As the economy clears this hurdle, growth should rebound from a modest sub-2% pace this quarter to a much faster clip come spring. Inflation, however, is likely to remain elevated through 2022, even as it decelerates from the current highs (see here).

Canada – Marching to a Hike

To the surprise of many, the Bank of Canada opted to hold its policy rate steady in this Wednesday’s hotly anticipated interest rate decision. In the accompanying press conference, Governor Macklem noted the on-going (but improving) situation with Omicron and the Bank’s preference to adequately prepare the public for higher interest rates as factors staying the Bank’s hand. The desire to formally wrap up forward guidance, and the fact that the next meeting is only five short weeks away likely helped too.

All that said, this was the definition of a hawkish hold. The Bank emphasized in the statement and accompanying Monetary Policy Report (MPR) that economic slack is now absorbed, teeing up a hike at its next meeting in early March. What’s more, the Bank left the door open for a rapid transition to balance sheet roll-off (i.e., quantitative tightening). While this is likely not in play for the March meeting, the Governor noted that the central bank will be “considering” that step once interest rates start to rise.

Critics of the decision note that a rate hike would have been entirely consistent with the Bank’s forward guidance that it would not raise the overnight rate until economic slack was eliminated. However, the high degree of uncertainty around that estimate – the MPR put a range on its measure of the output gap of between -0.75% (positive slack) and +0.25% (negative slack) – made the case for some advanced warning. Omicron looks to have added to the caution as restrictions resulted in a downgrade to first quarter growth expectations to just 2%.

We know that the Bank will be taking rates higher soon, but how rapidly and how far will depend on the outlook for inflation. It is safe to say that with Omicron worsening supply disruptions, it will remain well above target over the foreseeable future, enough to justify beginning to reverse a deeply negative, emergency level, inflation-adjusted policy rate (Chart 1). We anticipate at least two moves over the next three meetings. If all goes well, a rate hike roughly every second meeting continuing through 2023 will bring the overnight rate back to its pre-pandemic level (Chart 2). 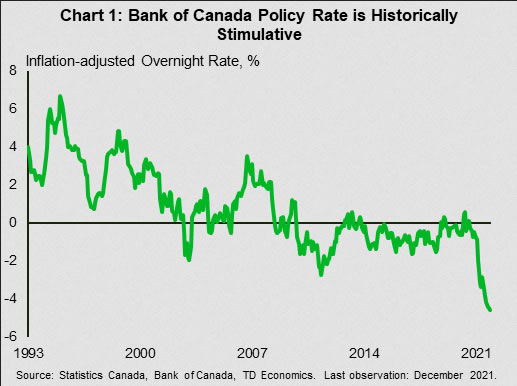 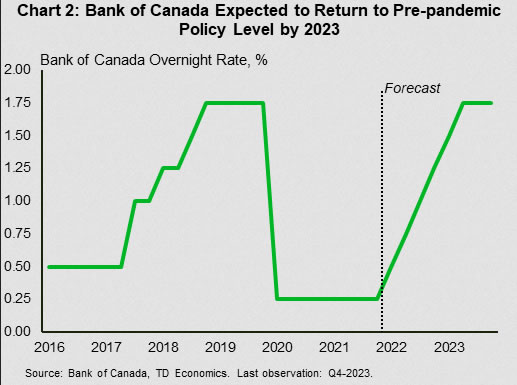 A slower cadence is also possible. After an initial round of moves, policymakers could very well opt to sit back for a few months and assess the balance of supply and demand. There is precedent for this. In 2017, the Bank hiked twice in the third quarter of the year and paused in the fourth before picking back up in early 2018.

However, should inflation prove more stubborn, the Bank is likely to take a more aggressive approach. We have become accustomed to policy increasing in 25 basis point increments (the last time the Bank raised more than this in a single meeting was May 2000), but this has been an environment of relatively low and stable price growth. At the same time, the Bank could simply raise interest rates for longer, ultimately taking the overnight above its estimated “neutral” rate. With inflation the highest in thirty years, drastic times may call for drastic measures.