EURGBP has returned below its horizontally entwined 50- and 100-period simple moving averages (SMAs) following its fresh bounce at two-year low levels, which was curbed by the upper Bollinger band around 0.8359. The descending 200-period SMA is defending the bearish outlook, while the drifting 50- and 100-period SMAs are backing a sideways trend.

In addition, the static Bollinger bands have yet to disperse and thus infer that volatility has dropped, which could be a sign that a bigger price move could be around the corner. The short-term oscillators are mixed, reflecting opposing messages in momentum. The MACD remains north of the red trigger line and is toying with the zero threshold. On the other hand, the RSI has nudged below the 50 level, while the stochastic oscillator retains a negative charge, both promoting downward price action.

In the negative scenario, initial downside friction could occur at the mid-Bollinger band at 0.8331. Then the 0.8304-0.8312 support base formed by troughs recording two-year low levels could be challenged. If this hardened floor fails to dismiss bearish pressures, the price may slide toward the critical 0.8276-0.8294 support section, which was shaped by the December 2019 and February 2020 troughs. Should this boundary not act as an upside defence, the price could then target the 0.8248 low, identified back in July 2016.

Otherwise, if buyers re-emerge around the mid-Bollinger band and drive the pair over the 100- and 50-period SMAs at 0.8345 and 0.8349 respectively, resistance may then emanate from the upper Bollinger band at 0.8359 until 0.8374. Should buying interest endure, the descending 200-period SMA at 0.8386 could try to impede advances from gaining pace. However, if the price propels past the 200-period SMA, upside momentum could then come under the microscope as the bulls tackle the 0.8416-0.8431 resistance border. 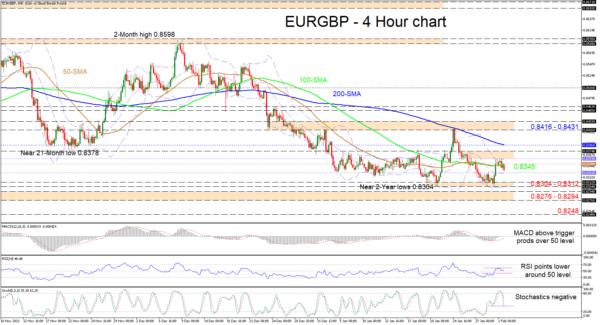