What Will Happen to Bitcoin in February?

Bitcoin’s rise came amid a rebound in stock indices and a weakening dollar. The S&P 500 index of the U.S. broad market tested highs for a week and a half but lost 5.3 per cent in January. The past month was the worst for the S&P 500 since the crisis in March 2020.

The high-tech Nasdaq fell even further in January, by 9%. Bitcoin has been particularly strongly correlated with the index lately.

Bitcoin lost about 17% in January, declining for the third month in a row. Meanwhile, February is seen as a more successful month for the first cryptocurrency in historical data.

Over the past 11 years, BTC has strengthened on eight occasions and only declined on three. The average gain over the eight years was 31%. If bitcoin shows a similar rise in February, it will end the month just above the $50,000 round mark.

On a historical basis, bitcoin has rarely declined for more than three months in a row. There have only been three such instances: in 2011, 2014 and during the crypto-winter in 2018. All this increases the chances of a BTC rebound in February.

On the chart, bitcoin remains within a down channel, but thanks to the rebound, it has made it to the upper end of the corridor over the past week. A consolidation above 39,000 would be the first signal of a trend break, while the ability to develop a rise above 40,000 could instil even more confidence in buyers. 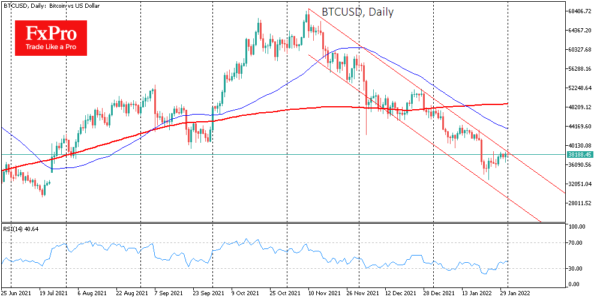