It looks like ECB is beating BoE in the race of hawkish surprise in a jam-packed day. Sterling spiked higher after four of the nine MPC members have indeed voted for a larger hike of 50bps. However, there was no clear follow through buying as BoE indicated there will only be “some further modest tightening” ahead.

On the other hand, ECB President Christine Lagarde admitted in the post-meeting press conference that inflation surprises caused unanimous concerns in the Governing Council. More importantly, she refused to repeat the talk that a rate hike in 2022 remain highly likely. It seems that Lagarde is leaving the door open to a change in forward guidance in March to reflect the chance of a rate hike within this year.

Elsewhere in the forex markets, Dollar is recovery mildly today but remains the weakest one for the week, followed by Yen. Aussie is still the strongest but it’s path would depend on overall risk sentiment.

Technically, a major focus now is whether EUR/GBP could ride on the u-turn to power through 0.8421 resistance, to pave the way for bullish trend reversal just ahead of 0.8276 key long term support. 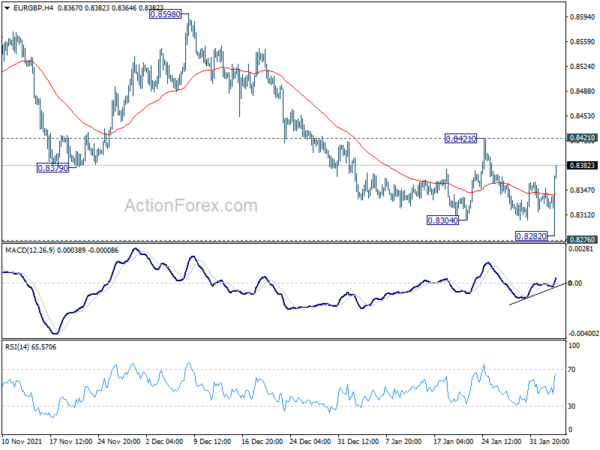 US initial jobless claims dropped back to 238k

US initial jobless claims dropped -23k to 238k in the week ending January 29, much better than expectation of 264k. Four-week moving average of initial claims rose 8k to 255k.

In the new four-quarter GDP projections:

UK PMI Services was finalized at 54.1 in January, up from December’s 10-month low of 53.6. PMI Composite was finalized at 54.2, up from prior month’s 53.6. Markit said charges had fastest rise on record in more than 25 years. Output and new business picked up at the start of 2022. Growth projections were strongest since May 2021.

It maintains the forward guidance that interest rates will “remain at their present or lower levels” until ECB sees inflation “reaching 2% well ahead of the end of tis projection horizon and durably for the rest of the projection horizon”. Also, ECB will need to judges that realized progress in underlying inflation is “sufficiently advanced to be consistent with inflation stabilizing at 2% over the medium term.”.

ECB also reiterated that it will discontinue net PEPP purchases at the end of march 2022, and reinvests until at least the end of 2024. APP net monthly purchases will amount to EUR 40B in Q2, then EUR 30B in Q3, and back to monthly pace of EUR 20B from October onwards, (for as long as necessary”.

BoJ Deputy Governor Masazumi Wakatabe said in a speech, “given the current situation where Japan’s economy has finally started to pick up from the pandemic, it is definitely too early for the Bank to start tightening monetary policy when the target has not yet been achieved as this could hinder the economic recovery.”

He reiterated the current policy as to continue with QQE with yield curve control, “as long as it is necessary” to maintain 2% inflation target in a “stable manner”. That is, CPI should remain at 2% while medium- to long-term inflation expectations are “anchored”.

“The economy was showing considerable strength prior to the spread of the Omicron variant, and that translated into a positive outlook for the coming months,”Alan Oster, NAB Group Chief Economist. “We now know that Omicron has dampened that recovery somewhat but, fundamentally, we expect that positive trajectory to continue when the current virus outbreak recedes.”

EUR/USD’s rebound from 1.1120 accelerates higher today and intraday bias stays on the upside for 1.1482 resistance. Considering bullish convergence condition in daily MACD, a medium term bottom could be in place already. Break of 1.1482 will affirm this case and target 38.2% retracement of 1.2348 to 1.1120 at 1.1639 next. On the downside however, break of 1.1265 minor support will retain near term bearishness, and flip bias back to the downside for retesting 1.1120 low instead. 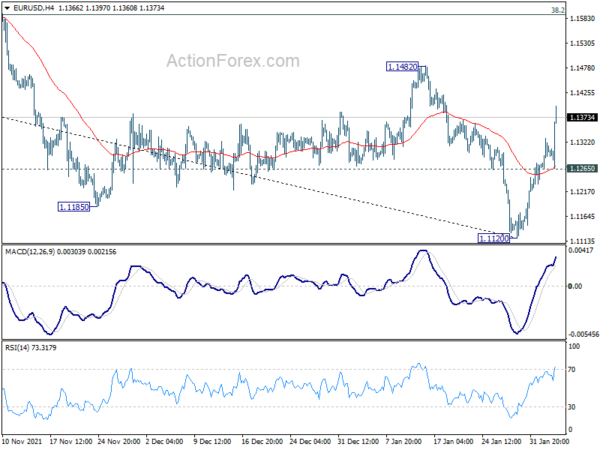 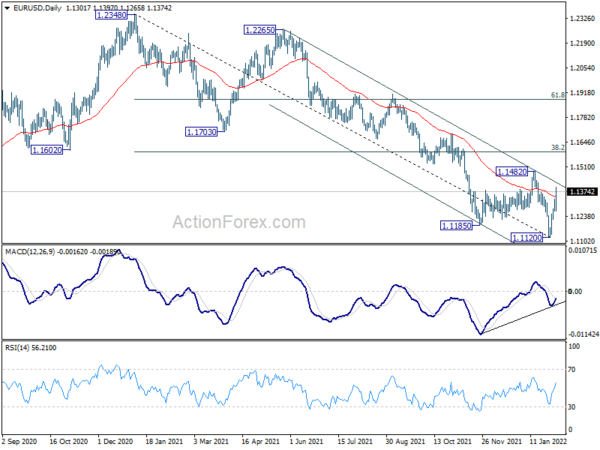