Markets Steady ahead of ECB and BoE, Dollar Staying Weak

The forex markets are generally steady in Asian session, as traders await ECB and BoE rate decisions. Dollar is staying as the weakest for the week one after yesterday’s selloff, followed by Yen. Aussie and Euro are the strongest ones. There is upside prospect for Euro even if ECB delivers just a slight hawkish tilt. But that’s far from being certain. Meanwhile, the greenback will continue to look into the developments in overall market sentiments, as well as ISM services today and non-farm payroll report tomorrow. 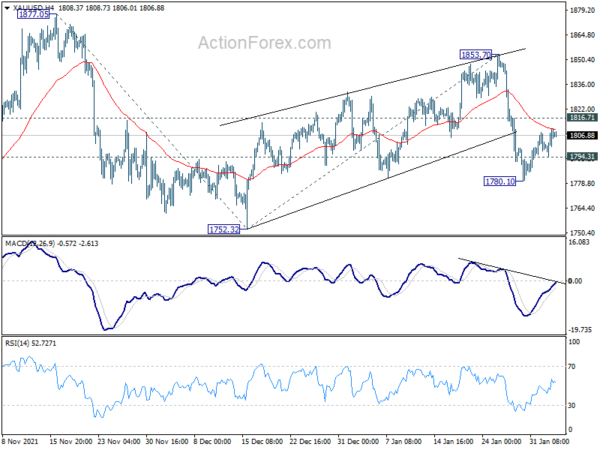 BoC Macklem: It will be a series of increases, not a single increase

BoC Governor Tiff Macklem told the Senate banking committee yesterday that inflation could stay “uncomfortably high” around 5% over the first half of 2022, and then “coming down fairly quickly in the second half.”

However, “there is some uncertainty about how quickly inflation will come down because we’ve never experienced a pandemic like this before.”

“It will be a series of increases, not a single increase,” he said.

BoJ Deputy Governor Masazumi Wakatabe said in a speech, “given the current situation where Japan’s economy has finally started to pick up from the pandemic, it is definitely too early for the Bank to start tightening monetary policy when the target has not yet been achieved as this could hinder the economic recovery.”

He reiterated the current policy as to continue with QQE with yield curve control, “as long as it is necessary” to maintain 2% inflation target in a “stable manner”. That is, CPI should remain at 2% while medium- to long-term inflation expectations are “anchored”.

“The economy was showing considerable strength prior to the spread of the Omicron variant, and that translated into a positive outlook for the coming months,”Alan Oster, NAB Group Chief Economist. “We now know that Omicron has dampened that recovery somewhat but, fundamentally, we expect that positive trajectory to continue when the current virus outbreak recedes.”

BoE and ECB previews, a look at EUR/GBP

Two central banks will announce monetary policy decisions today. BoE is generally expected to deliver a back-to-back rate hike and raise Bank Rate by 25bps to 0.50%. The central bank would also reveal the approach to wind down the GBP 895B asset purchases. Looking ahead, more tightening is expected ahead to bring the Bank Rate to 1.00% level by the end of the year. That should be reflected in the new economic projections in the Monetary Policy Summary.

On the other hand, ECB is expected to stand pat and maintain a cautious tone even though inflation surged to another record in January. Markets are seeing the first rate hike, at 10bps, by July. But President Christine Lagarde would likely talk down such expectations.

Here are some previews on ECB and BoE:

EUR/GBP is a pair to watch today. It should be noted that it’s now very close to a key long term support level at 0.8276, with bullish convergence condition in daily MACD. The conditions are there for a trend reversal. Break of 0.8421 resistance will complete a small double bottom pattern (0.8304, 0.8304), and bring stronger rebound. Further break of 0.8598 resistance should confirm medium term bottoming and turn outlook bullish.

EUR/GBP is now at a juncture. 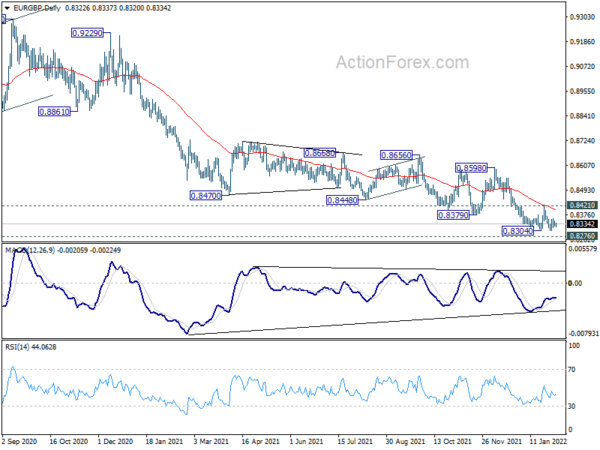 Later in the day, US will release jobless claims, non-farm productivity, ISM services and factory orders. 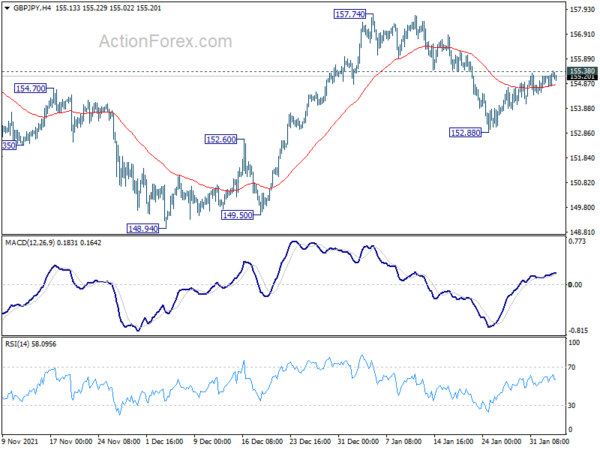 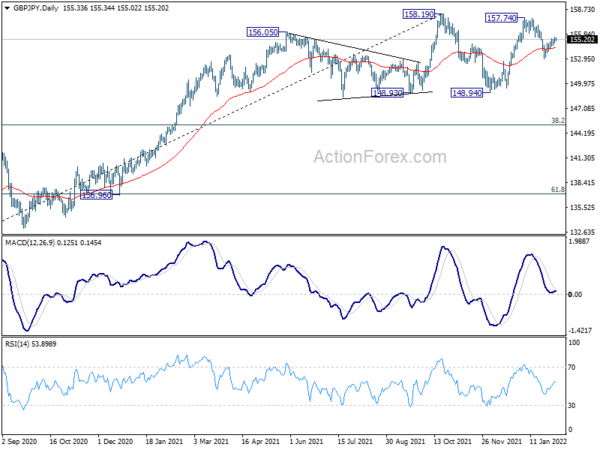