Week Ahead – US Inflation in the Spotlight Again, UK GDP Eyed Too

The skidding US dollar will be looking to the January inflation readings out of the United States to reverse its decline as financial markets enter a somewhat quieter week. UK GDP growth numbers will be the other highlight as the pound’s rally lost steam after the Bank of England sent some mixed signals on the economy. The kiwi might find some love should the RBNZ’s own survey show inflation expectations are creeping higher in New Zealand. However, with earnings releases also slowing down, markets might nevertheless struggle to find fresh direction in the coming days.

Waiting for inflation to peak

It will likely be another grim picture on the inflation front next week as the US consumer price index is expected to edge up to yet another multi-decade high on Thursday. The 12-month rate in CPI is forecast to have risen by 7.2% in January, climbing 0.2 percentage points from the prior month. There might be some relief from the month-on-month rate, which is expected to have risen at the slowest pace in four months, by 0.4%. However, the core rate will likely raise eyebrows as it’s set to jump from 5.5% to 5.9% year-on-year.

The next few months will be crucial in determining whether inflation has started to peak so investors will be scouring over the details of the report to find any signs that price pressures in the CPI components most affected by the pandemic and the related supply disruptions are starting to ease.

Weaker-than-expected readings in either the headline or core rates would raise hopes that inflation is plateauing. This would be good news for shares on Wall Street but not so much for the dollar as Treasury yields could tumble if investors begin to price out some of the more excessive rate hikes bets for the Fed.

The dollar index slid sharply from the 18-month high it hit only a week ago after Fed policymakers calmed fears that a 50-basis-points rate hike was on the menu in March. However, should the inflation numbers surprise on the upside again, that would add wind to the dollar’s sails.

In other data out of the US, the University of Michigan’s preliminary consumer sentiment gauge will be watched on Friday.

The euro shot higher after the European Central Bank signalled it may have to pull back the pandemic-era stimulus at a much faster pace than currently indicated, opening the door to a rate increase in 2022, amid the worsening threat of higher inflation.

Eurozone government bond yields surged in the aftermath of the meeting as the prospect of a rate hike later this year draws closer. The euro will likely have to rely on this rally enduring in the coming days if it is to stretch its gains as there’s not a lot on the European calendar of interest apart from some German stats. 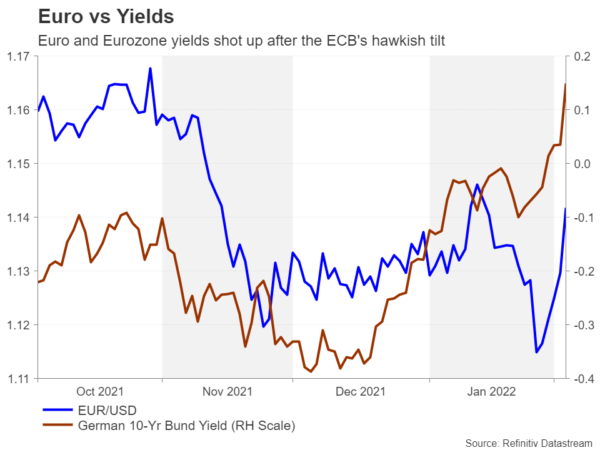 German industrial output for December is out on Monday and will be followed by trade figures on Wednesday and the final January CPI print on Friday. Germany’s recovery has stumbled lately and is now lagging those of some other Eurozone countries, so any positive surprises could assist the euro’s latest upwards march.

Outside of the euro area, Sweden’s Riksbank meets on Thursday and might follow in the ECB’s footsteps in sounding more hawkish.

The Bank of England maintained its advantage over other major central banks in being the least behind the curve on inflation by hiking rates for the second meeting in a row in February. However, despite the overall hawkish backdrop of the meeting, Governor Andrew Bailey pointed out some downside risks to their upwardly revised inflation forecasts, casting uncertainty over the rate outlook even as he flagged more rate hikes in upcoming meetings.

So although sterling remains well supported after the BoE meeting, it may need a fresh upside driver to sustain its rebound against the greenback. It’s doubtful if next week’s quarterly GDP publication can act as that driver.

Data on Friday will likely reveal that the UK economy recouped all its lost output from the pandemic in the three months to December. GDP is projected to have expanded by 1.1% quarter-on-quarter, the same pace as in Q3. 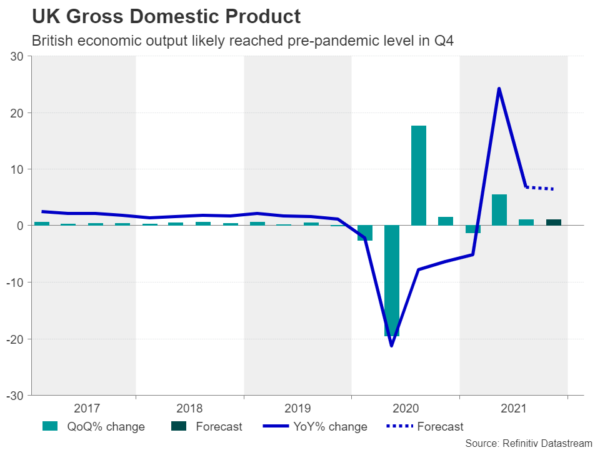 Separate numbers for December will be available too, including for industrial production and the trade balance. These could attract more attention if they show a bigger-than-anticipated impact from the Omicron wave on the economy. With the Bank of England decision out of the way, the degree to which growth faltered in December and January and how quickly it picks up going forward will probably be of more significance for traders.

Hence, reaction to the data might be limited even if there’s an impressive beat in the headline GDP figure.

The Reserve Bank of New Zealand doesn’t meet until February 23, but markets might get a clue as to what to expect from its quarterly survey on inflation expectations on Friday. The RBNZ’s measures of price expectations has been a good guide on the central bank’s next move in the past and could be again if expectations for one- and two-year inflation jump sharply like they did in the previous two surveys. 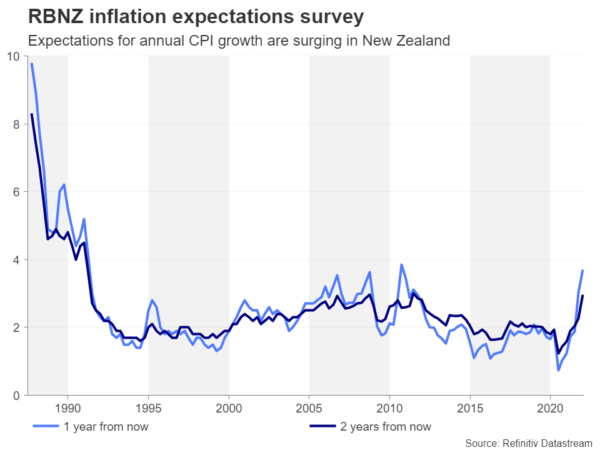 A rate hike is almost certain at the February meeting, but policymakers might have trouble with the very steep rate hike path futures markets have priced in. If inflation expectations climb further, that would create less room for disappointment and support the New Zealand dollar’s grind higher.

In neighbouring Australia, the aussie dollar will likely be taking its cues from the broader market risk tone as the only major release is the final retail sales estimate for December as well as for the whole December quarter.

A further improvement in risk sentiment next week could inflict more damage on the Japanese yen, which is paring some of its January gains. However, household spending numbers for Japan on Tuesday and corporate goods prices on Thursday are unlikely to provide much of a boost.