Another Elevated US Inflation Reading in the Cards Next Week

Canada should show a pullback in the merchandise trade balance to a smaller surplus, with both exports and imports ticking lower following a November surge. A drop in oil prices on early concerns about the economic impact of Omicron will lower the value of energy exports, although that will reverse in January as prices bounce back. We expect imports of machinery and equipment to rise after surveys showed many businesses bumping up against current production capacity and planning to invest more in operations.

The rapid rebound in the economy—both within Canada and abroad—into late last year has prompted global monetary policymakers to worry that higher inflation rates could last longer than expected. Against that backdrop, the US CPI report will be carefully watched. We look for headline inflation to hold around 7.3% in January, a touch higher than the previous month’s reading—and still running at its highest rate since the early 1980s. Year-over-year price growth is being pushed higher by surging vehicle prices (tied to global supply chain disruptions) and rising shelter costs. A bounce-back in oil prices in January left prices at the pump more than 40% higher than a year ago. But the breadth of price growth has also widened substantially with more than three-quarters of the CPI basket rising at a rate faster than 2% as of December.

Policymakers at the U.S. Fed are unlikely to be surprised by yet another elevated inflation reading. But higher inflation rates alongside increasingly tight labour markets leave little reason to keep interest rates at emergency low levels. The same is true in Canada, even though near-term Omicron disruptions are expected to be more significant. Both the Fed and Bank of Canada are expected to kick off a rate hiking cycles as early as next month. 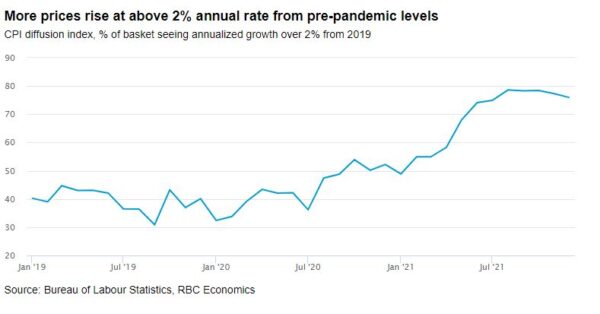 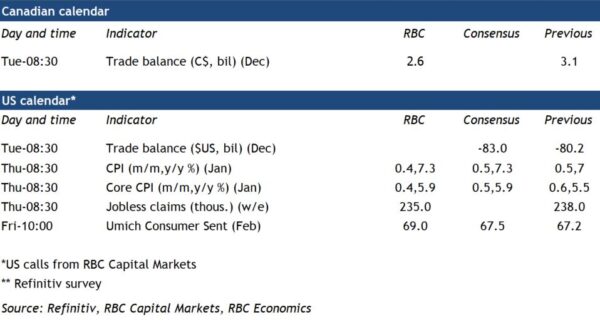