The UK will publish its final quarterly GDP growth readings for 2021 on Friday at 09:30 GMT. The outcome may not impress investors as forecasts imply the economy almost flatlined at the end of the year, growing more or less at the same pace as in the previous quarter. Perhaps, the data could be considered outdated as well since the Bank of England has already taken its first steps to tackle the hot inflation pressures. Therefore, the British pound may not find enough support from domestic data to resume its ascent this week, but the figures could still act as a safety net against any selling interest.

UK GDP growth to stabilize in Q4, but does it matter?

According to analysts, the UK economy expanded by 1.1% q/q in the last three months to December, exactly at the same rate as in the September quarter. The annual change may not light up fireworks either, as it is currently expected to moderate slightly to 6.5% y/y from 6.8% previously, approaching the normal pre-pandemic levels. 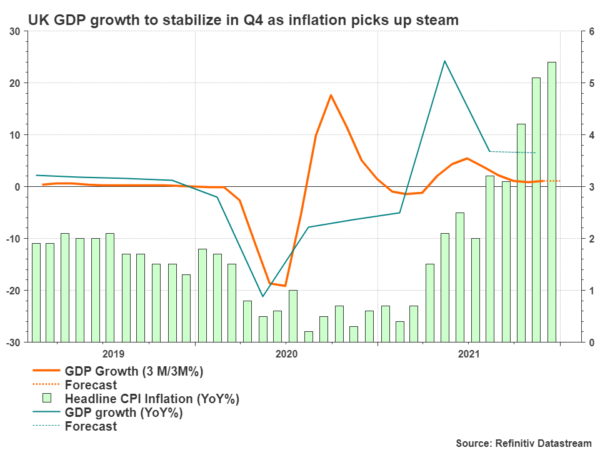 Undoubtedly, the above forecasts are still healthy and could bode well for the pound if materialized, especially as global supply chain disruptions and labor shortages are not expected to evaporate anytime soon. Yet, the data may not bring anything new to the table to adjust market sentiment.

The latest business Markit/CIPS PMI survey for January, although remaining within the expansion area, has already signalled a slower-than-expected positive start to the year, with the composite index barely improving from December. Details indicated that companies except those in the financial sector have raised their prices in an attempt to offset rising raw material costs, staff wages and energy bills, while some manufacturing companies faced their worst month in a year in terms of new orders. All in all, the survey’s respondents don’t expect any meaningful recovery before February. 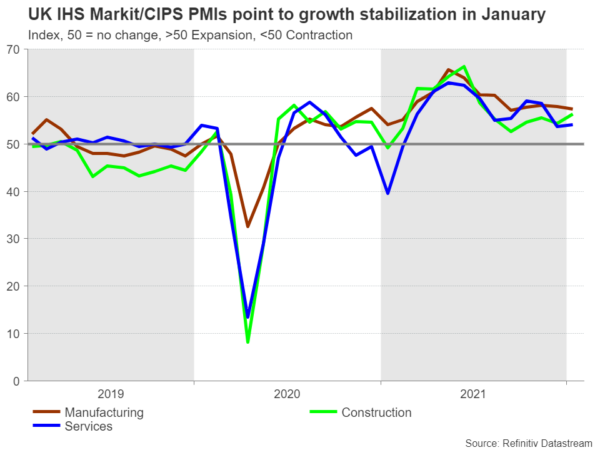 Besides, with the Bank of England having already hiked its interest rates twice over the past two meetings to 0.50% and given the high probability for a third rate increase in mid-March, last year’s GDP stats could do little to change the status quo unless they surprise significantly to the downside; that is currently seen the least likely case since the government applied only mild restrictions during the end-of-year omicron breakout.

Traders bearish on pound; US CPI inflation in focus 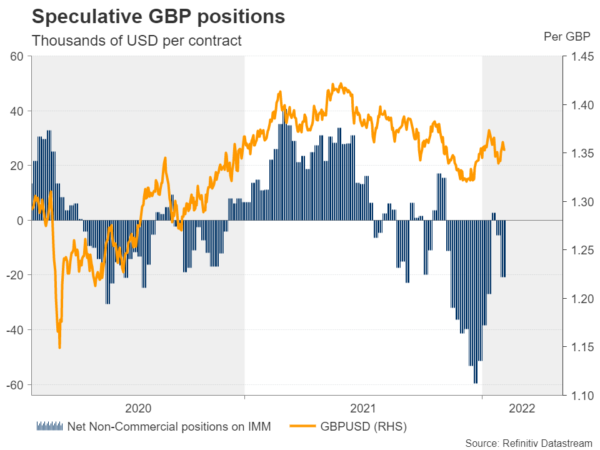 Speculative net short positions for the pound have worsened a bit in February, almost tripling last week’s size but are still standing above January’s extremes, reflecting a bearish mood among traders despite the BoE’s hawkish stance. In the absence of any important news out of the UK, the British pound could remain exposed to the dollar’s strength as the BoE and the Fed rate hike expectations increase in tandem. Particularly, Thursday’s US CPI Inflation readings for January could press pound/dollar below the nearby 1.3500 base and towards the 1.3435 support region if they call for a faster 50 bps Fed rate hike. A steeper downfall could bring the 1.3300 – 1.3355 zone next into view.

Otherwise, if US inflation falls short of analysts’ estimates, signalling that Fed rate projections are exaggerated, the pound could recoup the pullback off 1.3627. Yet only a close above 1.3700 and the 200-day simple moving average (SMA) could revive buying confidence in the market.