Much volatility was seen in the markets overnight, but as dusts settled, risk-off sentiment dominated. Fed funds futures are now pricing in 94.7% chance of a 50bps rate hike by Fed after the strong CPI reading, comparing to just 33.7% a week ago. Dollar is trading generally higher in Asia, followed by Yen. Aussie is the weakest followed by Kiwi and then Euro.

Technically, the outlook in many major pairs and crosses are mixed. EUR/USD struggled to break 1.1482 near term resistance firmly, but the retreat is held well above 1.1265 minor support. USD/JPY is still limited by 116.34 high despite yesterday’s rally. USD/CHF is staying in established range of 0.9176/0.9341. USD/CAD is also stuck in range of 1.2648/2795. Currency traders are not committing to a direction yet.

Fed Bullard wants to be nimble on rates, but Daly and Barkin may not

St Louis Fed President James Bullard said yesterday’s inflation report “shows continued inflationary pressure in the US” and is “concerning for me and for the Fed.” He added, “you have got the highest inflation in 40 years and I think we are going to have to be far more nimble and far more reactive to data.”

“I’d like to see 100 basis points in the bag by July 1,” Bullard added. “I was already more hawkish but I have pulled up dramatically what I think the committee should do.”

However, San Francisco Fed President Mary Daly said a half-point rate hike “is not my preference. “”Markets have already priced in the withdrawal of accommodation, and that is them hearing what the Fed is clearly communicating.”

Richmond Fed President Thomas Barkin said “I’m open to it conceptually”, regarding a half point hike. “Do I think there’s a screaming need to do it right now? I’d have to be convinced of that,” he added.

ECB Lagarde: We don’t want to choke off the recovery

ECB President Christine Lagarde said in an interview that raising interest rates “would not solve any of the current problems.” Instead, “if we acted too hastily now, the recovery of our economies could be considerably weaker and jobs would be jeopardized.”

“The U.S. economy is overheated, whereas our economy is far from being that,” she said. “That’s why we can — and must — proceed more cautiously. We don’t want to choke off the recovery.”

“Inflation may turn out to be higher than we projected in December,” Lagarde said. “We will analyze that in March, and then take it from there.” She also noted that inflation would exceed 2% target in medium term only if wages were to “significantly and persistently” break that level. “We are not seeing that at the moment at all,” she said. “In most euro-area countries, including Germany, wage demands are very moderate.”

RBA Lowe: We have scope to wait and see

RBA Governor Philip Lowe told a parliamentary committee that it is “too early” to conclude that inflation is “sustainably in the target range”. He added, “in underlying terms, inflation has just reached the midpoint of the target band for the first time in over seven years”.

The board is “prepared to be patient” and “we have scope to wait and see how the data develop and how some of the uncertainties are resolved. Countries with higher inflation rates have less scope here.”

RBNZ survey: Another rate hike expected in Q1, 4-5 hikes in a year

In the latest Survey of Expectations of RBNZ, OCR expectations continued to rise in the short, medium and long term. OCR is expected to rise from current 0.75% to 1.05% by the end of Q1. Mean estimate for OCR for one year ahead was 2.11%, indicating four to five 25bps hikes. Mean two-year ahead OCR expectations were at 2.47%

UK GDP, production and trade balance will be released in European session. Germany will release CPI final while Swiss will also release CPI. Later in the Day, US will release U of Michigan consumer sentiment.

Intraday bias in USD/JPY remains on the upside with focus on 116.34 high. Firm break there will resume larger up trend from 102.58. Next target is 118.65 long term resistance. On the downside, though, break of 115.31 minor support will extend the corrective pattern from 116.34 with another falling leg, and turn bias back to the downside for 114.14 support and possibly below. 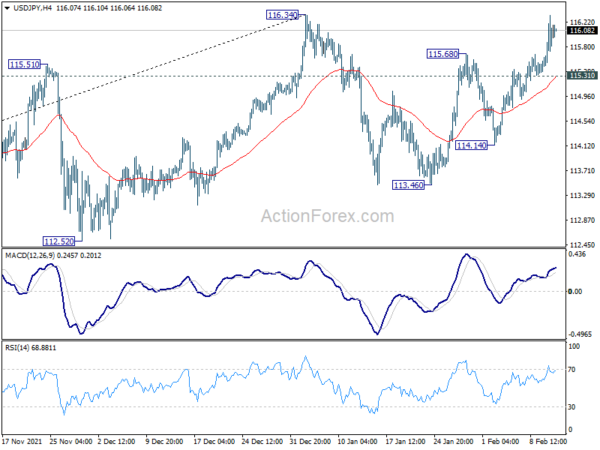 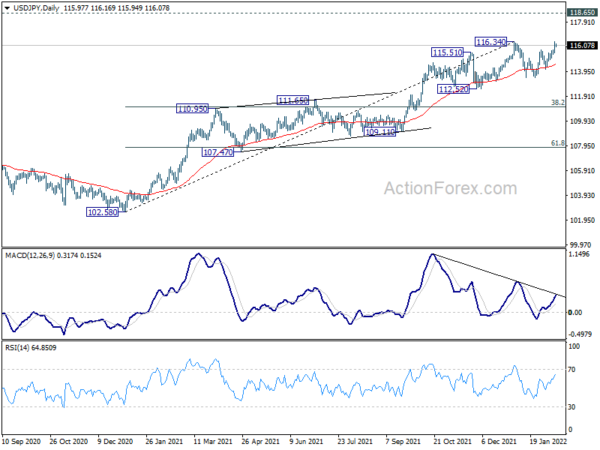