GBPUSD buyers have resurfaced around the 100-period simple moving average (SMA) after the pair’s recent retreat from a 1.3643 spike. Currently, the SMAs have tangled and are not indicating a clear message in terms of a price direction. That said, the 50-period SMA has regained its incline and has just crossed above the 200-period SMA, tilting the directional scale in favour of the upside.

The short-term oscillators are indicating that driving momentum in the pair has practically disengaged. The MACD is sandwiched between its neutral threshold and the flattened red trigger line, which is a tad above the zero mark. The RSI has marginally overstepped the 50 level, while the uptick in the stochastic %K line is hinting that the negative charge of the oscillator is weakening. As such, both are presently implying that buyers are slightly in the lead.

In the positive scenario, if the price gains more legs above the SMAs and the mid-Bollinger band at 1.3549, buyers may face the next positive hindrance at the upper Bollinger band at 1.3590. Should buyers keep at it, upside pressures could emanate from the nearby 1.3611-1.3627 resistance band, where the former level being the February 3 high, allowed only a price spike to 1.3643 before the pair surrendered 100 points back to the SMAs. That said, if the bulls overcome this barricade and stretch beyond the 1.3643 level, they could then confront the 1.3661 barrier before pursuing the 1.3686-1.3700 resistance border.

Alternatively, if selling interest intensifies and the pair sinks back beneath the SMAs around 1.3544 and 1.3518, the lower Bollinger band – coupled with the 1.3489-1.3504 support foundation – could once again attempt to dismiss negative tendencies from gaining the upper hand. However, failing to do so, the 1.3460 and 1.3434 obstacles may then take heavy fire. Dropping past these barriers too, the bears could challenge the 1.3393 trough and the 1.3356-1.3374 support border that extends back to the end of November 2021. 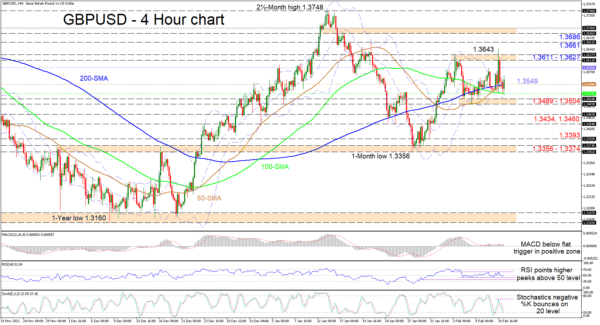