Will the Battered Yen Cheer on Positive GDP Data?

After a negative quarter, Japan’s economy probably returned to the expansion area in the last three months of 2021, GDP data is expected to show on Monday at 23:50 GMT. While the news could put smiles on policymakers’ faces, the relief may only be temporary as the latest record pickup in covid infections has brought a gloomy start to the year. Besides, with the Bank of Japan (BoJ) being determined to stay out of the tightening camp, the stats could barely provide any meaningful boost to the yen.

Japan to post positive growth in Q4, but will it last?

The industrialized export-reliant Japanese economy dived back into contraction at a much faster annualized rate of 3.6% y/y than analysts thought during the third quarter as a resurgence in covid infections weighed on consumption and supply bottlenecks pressured auto production and cut business spending.

The national output shrinkage contrasted the demand-led expansion in other advanced economies such as the US, though with the pandemic taking another halt during the last three months of the year, the upcoming Q4 GDP growth readings could be more promising. Particularly, forecasts point to a quarterly growth of 1.4% versus -0.9% previously and to a quick annualized rebound of 5.8%, with private consumption and capital expenditure likely contributing positively this time. 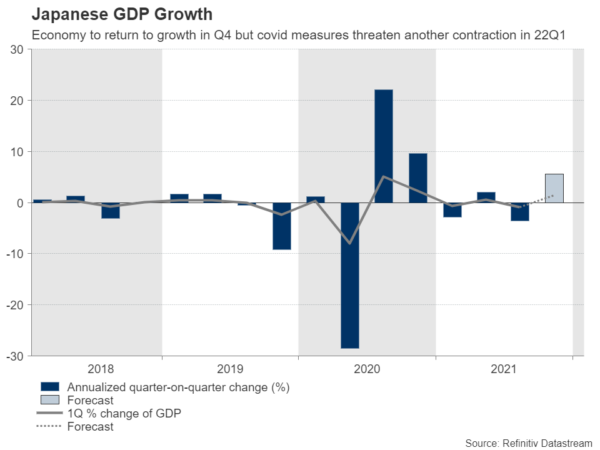 How will the yen react to GDP data?

If analysts are right, the economy will register its largest growth in a year. But would the news be good enough to boost the battered safe-haven yen?

Probably not. The pandemic roared harder than ever in January, elevating daily infections to fresh record levels and way higher than those in previous cycles. As a result, the government reintroduced quasi-emergency measures, which limited business working hours and reduced traffic in streets, to protect its health system. Yet after a month, it is still reluctant to scale back its restrictions as the battle is far from being over and the third round of vaccines has gained little popularity among residents. Hence, although other advanced economies are hoping for a pleasant start to 2022, Japan may lag a bit before catching up, likely leaving the yen in the doldrums for now.

What is more striking is although inflation is getting toxic in several countries, adding pressure on global central banks to tighten monetary policy at a faster pace, price growth in Japan is still below the central bank’s target. Of course, heating global commodity prices have driven Japanese producer prices to the highest in four decades, but companies can still afford them without transferring the extra costs to consumers, preserving the CPI inflation index comfortably below 2.0%. Technically, that defends the BoJ’s super accommodative policy settings. But the job is getting difficult when policy divergence with the rest of the world is widening, challenging its yield curve control mandate. 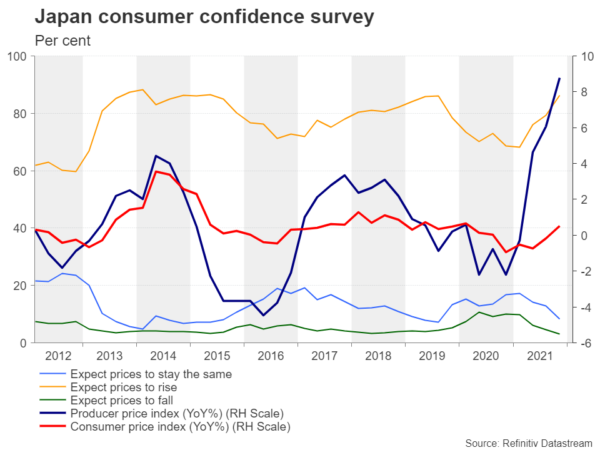 The rally in global bond yields boosted Japan’s 10-year yield to a notch below the 0.25% upper limit this week, forcing the central bank to engage in an unlimited bond buying action. The longer the yields are pressuring the 0.25% top band, the larger the amount of bonds the central bank needs to buy to achieve its yield curve control target. That said, the BoJ does not look to be sweating yet, with the BoJ chief Kuroda insisting yesterday that there is no chance of debating exiting the current ultra-easy policy, at least until his five-year term expires in April 2023. Therefore, markets will probably have to wait after that deadline to see any shifts in policy. 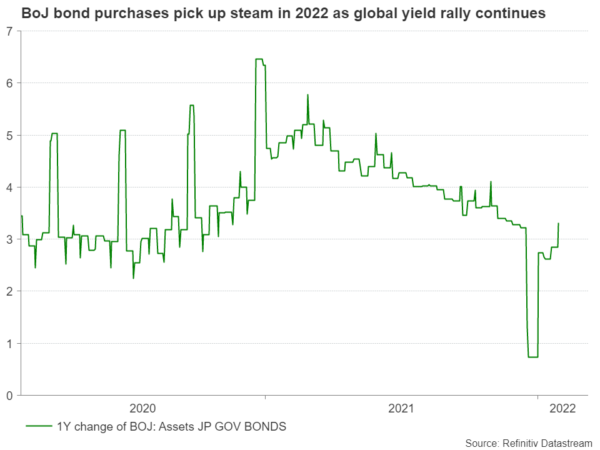 Hence, unless the bitter inflation pressures make the BoJ suddenly change its mind, the yen may remain subdued. It has significantly melted since the start of 2021, currently being around 12% down against the US dollar as traders remain steadily bearish on the currency for almost a year now according to CFTC speculative positions. Perhaps, a weaker currency makes Japanese exports more competitive overseas, though with production costs and import prices spiralling, businesses may have a tough time if their margins continue to narrow.

From a technical perspective, the sell-off in the yen could intensify if the US dollar closes above the 116.11 ceiling, though only a sharp negative surprise in the GDP data could trigger such a move, potentially pushing the price into the 117.00 – 117.50 region.

Alternatively, stronger-than-expected GDP growth figures may not excite traders. Nevertheless, if the bulls fail to claim the 116.00 level, the price may decelerate towards the 115.50 – 115.00 zone, while slightly lower, it may test the tentative ascending trendline drawn from the 109.10 low currently seen around 114.40.