Australian Dollar rises mildly in Asian session, together with New Zealand Dollar. But both were hammed down after a Russian media reported that Ukraine forces opened fire on four settlements of the LPR. Overall market sentiment remains rather fragile and ultra-sentiment. Dollar and Yen are both picking up some buying while European majors are mixed.

Technically, Gold’s retreat from 1879.24 was rather shallow and contained well above rising 4 hour 55 EMA so far. This keeps near term bullish bias intact. Focus could soon be back on 1879.24 temporary top. Break there will resume recent rally to 1916.30 resistance. If happens, that could also come with another down leg in Dollar. 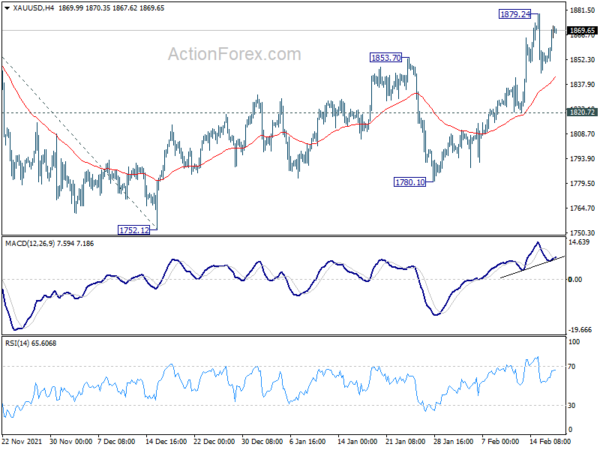 FOMC minutes: Officials to update their assessments at each meeting

The minutes of the January FOMC meeting contained little surprises. Fed acknowledged that ” recent inflation readings had continued to significantly exceed the Committee’s longer-run goal and elevated inflation was persisting longer than they had anticipated.” And, ” elevated inflation was a burden on U.S. households, particularly those who were least able to pay higher prices for essential goods and services.”

Most participants noted, “if inflation does not move down as they expect, it would be appropriate for the Committee to remove policy accommodation at a faster pace than they currently anticipate.” But, “the appropriate path of policy would depend on economic and financial developments and their implications for the outlook and the risks around the outlook.”

Fed officials “will be updating their assessments of the appropriate setting for the policy stance at each meeting.”

Meanwhile, ” in light of the current high level of the Federal Reserve’s securities holdings, a significant reduction in the size of the balance sheet would likely be appropriate.”

Minneapolis Fed President Neel Kashkari said yesterday that it’s “appropriate” to start normalizing policy. However, he cautioned “let’s not overdo it”. “If we raise rates really aggressively, we run the risk of slamming the brakes on the economy, putting the economy into recession, which would then — we’d be crashing back down into this low inflation environment,” he warned.

Kashkari also revealed that he and his family had COVID earlier this year, and “a lot of families are experiencing what we just experienced.” He added “this will be a while” before people can be comfortably living with the coronavirus.

“As with earlier rapid changes in the labour market during the pandemic, hours continue to be much more affected than employment. This reflects people working reduced or no hours, without necessarily losing their jobs.”

Swiss trade balance will be released in European session. ECB will publish monthly economic bulletin. Later in the day, US will release jobless claims, housing starts and building permits, and Philly Fed survey. 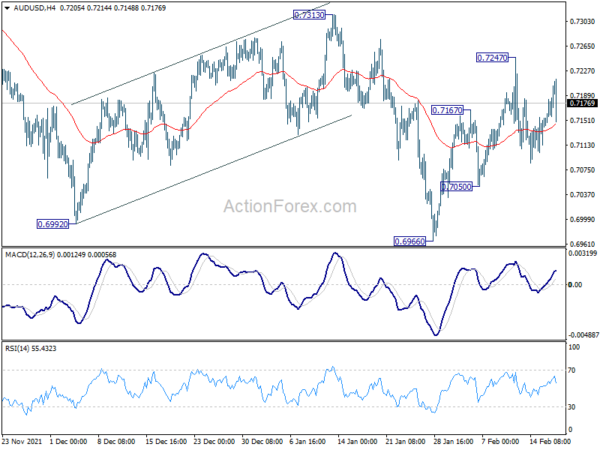 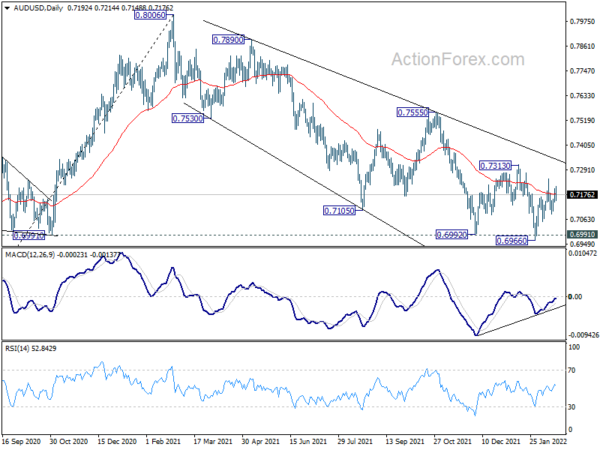