RBNZ Policy Decision: Selling the News or a Bullish Surprise?

The Reserve Bank of New Zealand, the current king of the global tightening cycle, is expected to deliver its third rate hike in five months with full certainty when its policy meeting concludes on Wednesday at 01:00 GMT. Despite that, the kiwi remains a laggard in the FX space, losing more than 2.0% against the US dollar year-to-date, and if someone believes that the policy decision will change its fortunes this time, they’d better not hold their breath.

Investors are certain the RBNZ will hike its interest rate up to 1% as inflation has gone through the roof to top at a three decade high of 5.9% y/y in the last quarter of 2021. The central bank aims to cool inflation back to the midpoint of its 1-3% range target, and it was the first among its major counterparts to set its plan into action, ending its quantitative easing program last July and raising interest rates twice by 25 bps each time in October and November to 0.75%. 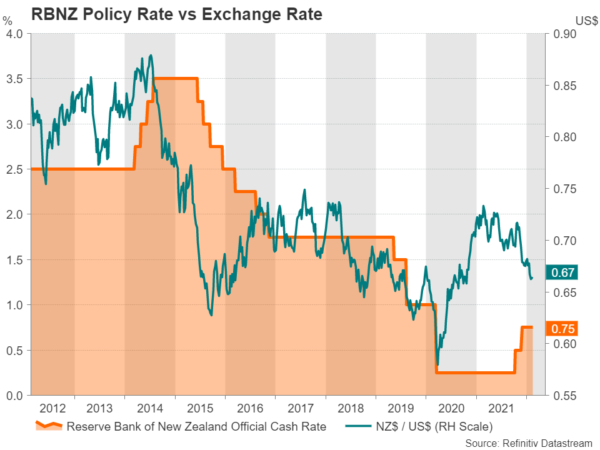 However, more is still needed to be done as the evidence from around the world suggests supply chain constraints continued to heat inflationary pressures at the start of the new year, while the latest survey conducted by the RBNZ showed one-year and two-year inflation expectations picking up steam above 3.0%. Perhaps the high mortgage rates brought some results in the hot housing market, making house prices and sales volumes decelerate in January according to the latest REINZ property report, though policymakers will probably require a more convincing slowdown and they will not hesitate to tighten their policy further until they get the job done. 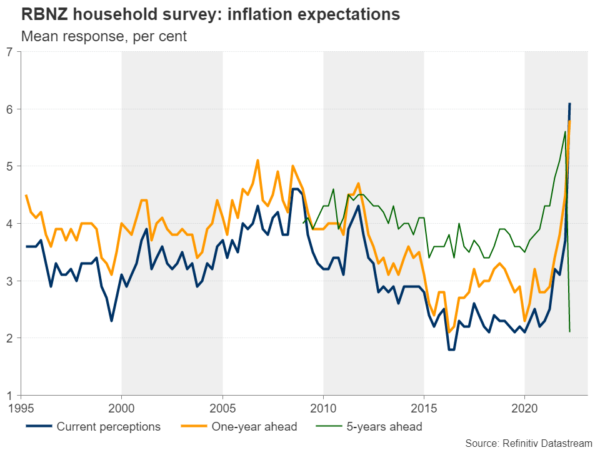 Futures markets are currently fully pricing in six more rate hikes by October, while they largely expect borrowing costs to rise to 2.5% by November 2022. Fundamentally, the economic picture is not too bright. Closing its borders to foreign investors, the government has limited the supply of imported labor, pressing the unemployment rate to a historic low of 3.2% during the December quarter, but that has consequently worsened labor shortages and created wage pressures.

GDP data mirrored a contracting economy during the third quarter, while indicators from the last three months of the year showed retail sales returning to the negative area and business confidence plunging. Adding to the latter, even if dairy prices jumped to record highs recently because of the pandemic disruptions and stricter environmental regulations, farmers used the extra cash for debt repayment instead of reinvesting the money in their businesses. Probably that could further weigh on production in the year ahead. 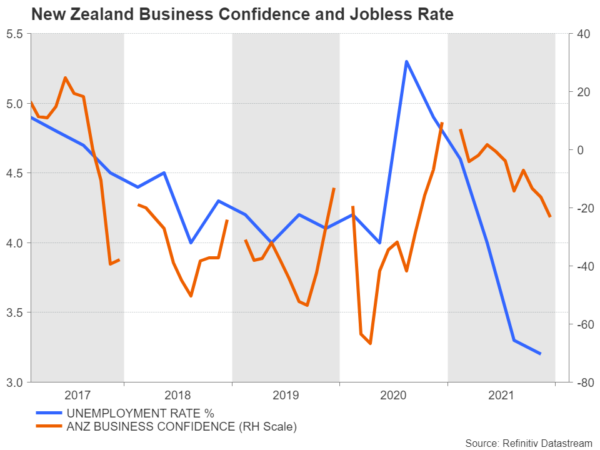 Having its first policy meeting since November and scheduled to meet again in just under two months from now, the RBNZ’s outlook on the economy and its market communication could provide fresh direction to traders for the new year. However, given the growth uncertainty and fears of not panicking investors as geopolitical tensions across the Ukrainian border remain elevated, the central bank will probably stick to the steady pace of 25 bps rate increases to mitigate the inflation risk as other central banks have done so far, disappointing those who expect a larger 50 bps rate hike.

Hence, unless the RBNZ brightens the foreseeing future of the New Zealand economy or raises the stakes for a faster monetary tightening, the policy announcement itself may not be a big surprise to investors, and it could even be a classic case of selling the news. If this turns out to be the case, kiwi/dollar may miss a clear trendline breakout above 0.6730 and its 50-day simple moving average (SMA), flipping backwards to seek support near the familiar 0.6600 support band. A steeper downfall could even threaten an outlook deterioration below the 15-month low of 0.6528.

Should the central bank remain confident in the economy, signalling that it is ready to use all options to ease inflation to the target level, including a steeper pace of rate of increases, kiwi/dollar could violate the 0.6730 border and run up to the 0.6790 – 0.6800 resistance zone. Beyond the latter, the rally could head for a test within the 0.6870 – 0.6900 barrier.

Otherwise, the commodity-dependent New Zealand currency may remain exposed to the dollar volatility.