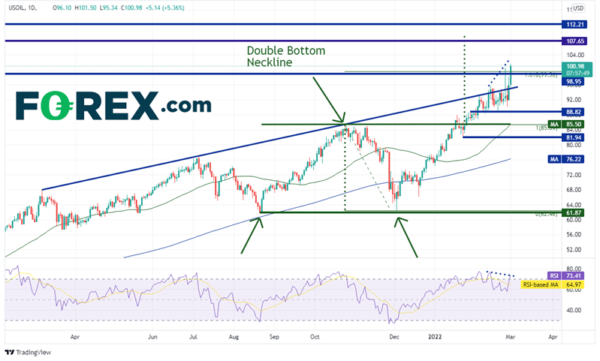 Rumors of a large convoy of military trucks and armored vehicles heading toward the capital of Kyiv are driving oil prices higher.

WTI Crude Oil traded as high as 101.50 today thus far as Russia continues to be on the offensive in Ukraine. This is the highest level for Crude Oil since July 2014. Rumors of a large convoy of military trucks and armored vehicles heading toward the capital of Kyiv are driving oil prices higher.

Price continues to rise as Russian supply has been cut off from the markets. However, it is rising despite an expected increase of 400,000 barrels per day when OPEC+ meets tomorrow. In addition, the IEA and US allies are meeting this week to discuss the possibility of releasing an additional 70,000 million barrels from strategic reserves.

Will price continue higher? If WTI can close above 100 it will close above some key levels, including horizontal resistance (now support) and the 161.8% Fibonacci extension from the highs of October 25th, 2021 to the lows of December 2nd, 2021. The next resistance level isn’t until 107.65, which is the high from June 2014. However, notice that the RSI is diverging with price while in overbought territory, an indication that price may be ready for a near-term pullback. Support is at today’s low of 95.34, which is also an upward sloping trendline. Below there, price can fall all the way down to horizontal support near 88.82. The neckline of the double bottom pattern is the next level of support near 85.50, which is also the 50-Day Moving Average.

With the uncertainty regarding the conflict between Russian and Ukraine, oil prices continue to climb. This is despite and expected supply increase from OPEC+ and a possible coordinated release from strategic reserves. The next round of talks between Russia and Ukraine are scheduled for March 2nd. The results may determine the next direction for Crude oil prices.