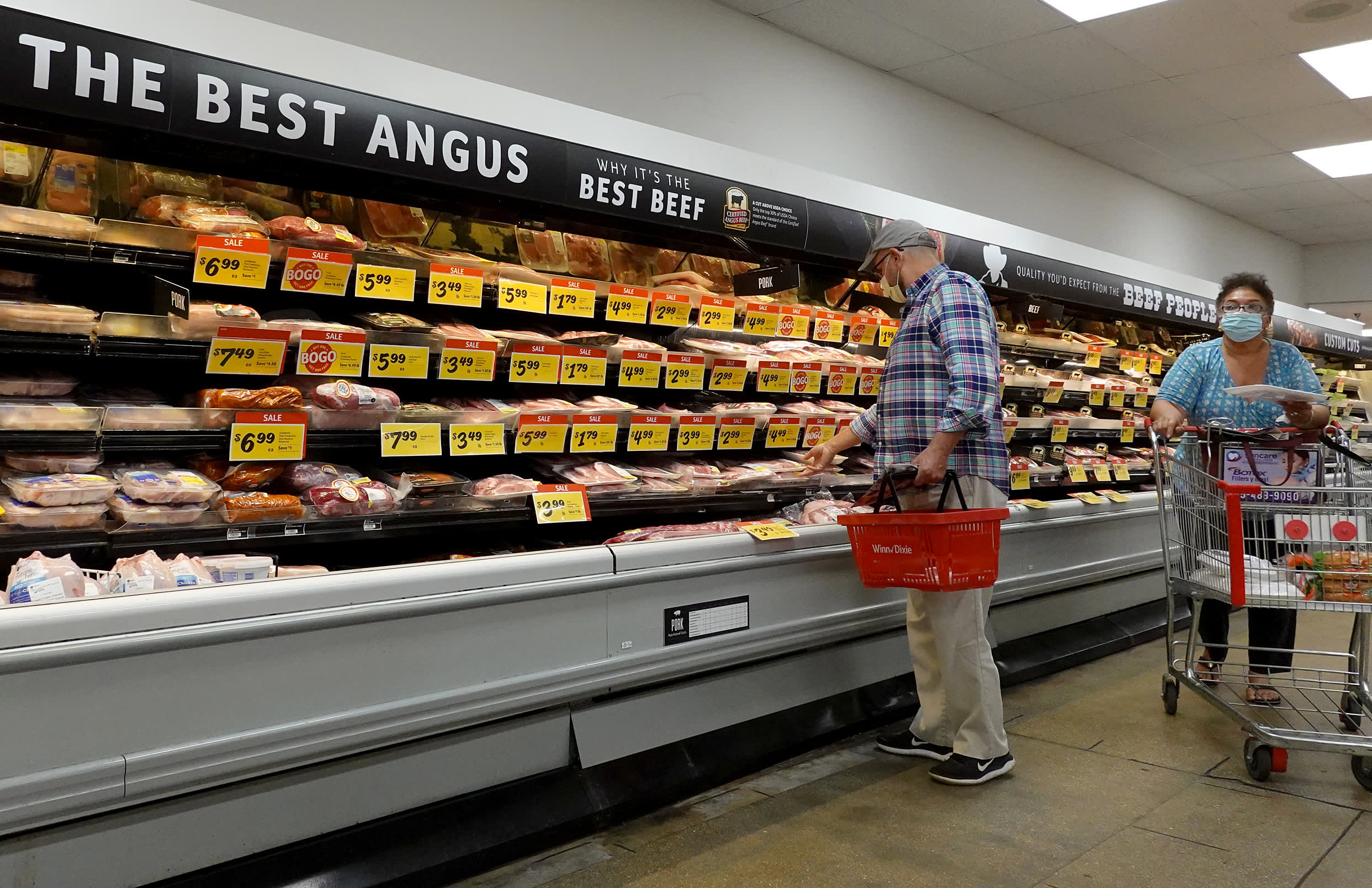 Inflation grew worse in February amid the escalating crisis in Ukraine and price pressures that became more entrenched.

The consumer price index, which measures a wide-ranging basket of goods and services, increased 7.9% over the past 12 months, a fresh 40-year high for the closely followed gauge, according to the Labor Department’s Bureau of Labor Statistics.

The February acceleration was the fastest pace since January1982, back when the U.S. economy confronted the twin threat of higher inflation and reduced economic growth.

On a month-over-month basis, the CPI gain was 0.8%. Economists surveyed by Dow Jones had expected headline inflation to increase 7.8% for the year and 0.7% for the month.

Food prices rose 1% and food at home jumped 1.4%, both the fastest monthly gains since April 2020, in the early days of the Covid-19 pandemic.

A customer refuels at a Chevron gas station with prices above $4 a gallon in Seattle, Washington, U.S., on Monday, March 7, 2022.

Excluding volatile food and energy prices, so-called core inflation rose 6.4%, in line with estimates and the highest since August 1982. On a monthly basis, core CPI was up 0.5, also consistent with Wall Street expectations.

The rise in inflation meant worker paychecks fell further behind despite what otherwise would be considered strong increases.

Real inflation-adjusted average hourly earnings for the month fell 0.8% in February, contributing to a 2.6% decline over the past year, according to the BLS. That came even though headline earnings rose 5.1% from a year ago, but were outweighed by the price surge.

“Inflation is coming in hot but the reality is there are no real surprises in this report,” said Mike Loewengart, managing director of investment strategy for E-Trade. “The market likely already priced the inflation increase in accordingly, and is instead intently focused on Ukraine and the downstream impact from commodities, which are already sending shockwaves through the market.”

The inflation surge is in keeping with price gains over the past year. Inflation has roared higher amid an unprecedented government spending blitz coupled with persistent supply chain disruptions that have been unable to keep up with stimulus-fueled demand, particularly for goods over services.

Policymakers have been expecting inflation to abate as supply chain issues ease. The New York Fed’s supply chain index shows pressure has eased in 2022, though it is still near historically high levels.

Vehicle costs have been a powerful inflationary force but showed signs of easing in February. Used car and truck prices actually declined 0.2%, their first negative showing since September 2021, but are still up 41.2% over the past year. New car prices rose 0.3% for the month and 12.4% over the 12-month period.

A raging crisis in Europe has only fed into the price pressures, as sanctions against Russia have coincided with surging gasoline costs. Prices at the pump are up about 24% over just the past month and 53% in the past year, according to AAA.

Moreover, business are raising costs to keep up with the price of raw goods and increasing pay in a historically tight labor market in which there are about 4.8 million more job openings than there are available workers.

Recent surveys, including one this week from the National Federation of Independent Business, show a record level of smaller companies are raising prices to cope with surging costs.

To try to stem the trend, the Federal Reserve is expected next week to announce the first of a series of interest rate hikes aimed at slowing inflation. It will be the first time the central bank has raised rates in more than three years, and mark a reversal of a zero interest rate policy and unprecedented levels of cash injections for an economy that in 2021 grew at its fastest pace in 37 years.

However, inflation is not a U.S.-centric story.

Global prices are subject to many of the same factors hitting the domestic economy, and central banks are responding in kind. On Thursday, the European Central Bank said it was not moving its benchmark interest rate but would end its own asset purchase program sooner than planned.

In other economic news, jobless claims for the week ended March 5 totaled 227,000, higher than the 216,000 estimate and up 11,000 from the previous week, the Labor Department said. Continuing claims rose slightly to just below 1.5 million, though the four-week moving average remained at its lowest level since 1970.