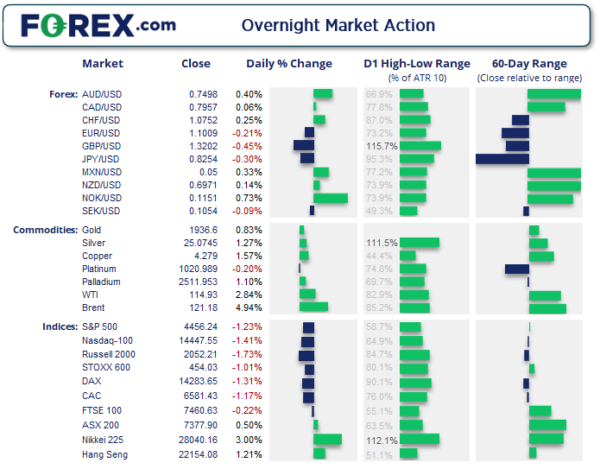 US indices pulled back from their highs overnight as bond yields continued to scream higher as Fed officials maintained their hawkish rhetoric. The invasion of Ukraine has entered its second month, and concerns over oil supplies has sent crude higher. Bonds also rose to send yields and equity markets lower with all Wall Street benchmarks in the red. 9 of the 11 S&P 500 sectors posted losses, led by health care and financials, with energy being the only one to post materials gains of 1.7% (utilities were only slightly higher).

WTI rose to a high of 115.40 and now trades around the 2011 high of 114.83. A bullish engulfing candle formed on the daily chart and with Russia upping the ante ahead of the NATO meeting, oil will likely remain supported with the potential to rally. Whilst there is chatter that the Iran deal is imminent, it would only account for a fraction of oil lost if Europe decides to ban Russian energy imports.

The yellow metals continues to track oil prices, albeit with lower levels of volatility. But the rise in oil has helped gold prices recover to the top of the 1900 – 1950 range. A bullish hammer formed last Wednesday to show demand around 1900, and price action has mostly remained above the June high of 1916.53 since. A bullish engulfing formed yesterday, so we’re on guard for a breakout today. The four-hour chart shows a higher low formed along its 200-bar eMA, and prices have broken out of a corrective channel. Ideally prices can hold above the weekly pivot point (black line) and move towards our 1980 target.

Russia will begin demanding that “unfriendly countries” (the West) pay for gas in rubles, a move that could force a back door relaxation of some sanctions and support their struggling currency. And that will give EU officials another talking point at today’s meeting, which will focus on whether they can agree to ban Russian oil imports. Not that they need any more to talk about. The ruble rose to a 5-week high against the US dollar.

UK inflation hit a 30-year high but it wasn’t enough to save a weaker GBP alongside a weaker economic forecast from OBR, which saw growth slashed to 3.8% this year from 6% in October. AUD was the strongest major as it tracked commodities higher. The US dollar index pulled back from its 7-day high and formed a bearish engulfing candle on the daily chart, despite higher bond yields.