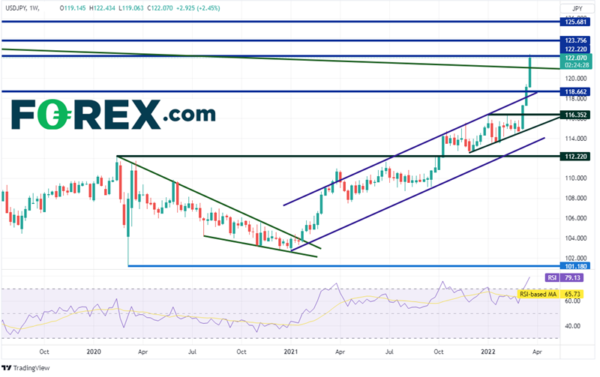 Last week was about the US and NATO working to help Ukraine.  However, the Russian invasion into Ukraine continues this week as the top Russian negotiator said that no progress is being made on main political issues.  Can the two sides reach a ceasefire agreement this week? OPEC+ also meets this week on Thursday.  Will they hike output more than expected due to such high oil prices?  Also, there was a lot of chatter last week from Fed officials of a possible 50bps hike at an upcoming meeting.  Will markets continue to push yields higher?  Also, this week the US will see the Fed’s favorite measure of inflation, Core PCE, and the week will culminate with March Non-Farm Payrolls!

Talks continue, but little progress has been made.  As a result, the Russian invasion continues. Last week, US President Joe Biden met with NATO allies and said that he supports sending more NATO troops to the Eastern border to stop Russia from going any further.  In addition, Biden and the EU have reached an agreement to boost Europe’s supply of liquified natural gas by 2022, which will reduce Europe’s reliance on Russia. The US and NATO are also working on contingency plans in case Russia chooses to strike a NATO territory.  However, markets also need to pay attention to China, as there is intelligence which suggests that they may provide Russia with semiconductors and other technology hardware.  Could China help Russia to extend the war? Also, what will be the ramifications for China if they do supply Russia with equipment?

OPEC+ meets this week on Thursday to discuss how much it should increase oil output. Recently, the IEA said that the world may be facing it biggest oil supply shock in decades.  They also said that 3 million bpd would be lost from the market if Russia is shut in.  The last time OPEC+ met, the war had just begun.  Since then, the EU has threatened to ban oil imports from Russia and price reached a high of 129.42.  On Friday, Joe Biden said he would consider supplying more oil from the SPRs, possibly up to 30 million barrels.  However, despite the increase in both demand and price, OPEC+ may stick to its plan and only increase output by 400,000bpd as Russia is one of countries that are part of this group (the “plus” group).

Fed officials last week were out in full force letting the markets know that they will do whatever it takes to fight inflation.  Last week, Powell said that “If we conclude that it is appropriate to move more aggressively by raising Federal Funds rates by more than 25bps at a meeting, or meetings, we will do so.”  In addition, he said that, “If we need to tighten beyond common measures of neutral and into a more restrictive stance, we will do that as well.”  No less than 5 Fed members spoke last week, all towing the same line.  According to the CME Fedwatch tool, markets are currently pricing in a 70% chance of a 50bps hike at the meeting on May 4th.  Watch for more comments this week to see if the inflation-fighting theme remains.

This week may solidify some of those Fed beliefs as the US releases the Fed’s favorite measure of inflation, Core PCE, which removes the volatile components of food and energy.  Expectations are for 5.5% YoY vs 5.2% in January.  This would be the highest level in nearly 40 years.  The US will also release Non-Farm payrolls this week.  Expectations are for an increase of 488,000 jobs for March.  Note that last week’s jobless claims were only 187,000, the lowest level since September 6th, 1969!  The risk is that the number comes out weaker than expected.  In addition, Australia will release Retail Sales, China will release NBS Manufacturing and Non-Manufacturing numbers and the EU will release its first look at March CPI. Other important economic data is as follows:

Chart of the Week: Weekly USD/JPY USD/JPY has been on a tear these past 3 weeks, up over 6%.  The pair has been moving higher since January 2021 in an orderly channel from 102.59 to 118.66.  Price began accelerating more aggressively during the week of March 7th as US interest rates continued to rise.  2 weeks ago, price rose above the top trendline of the channel and horizontal resistance, making fresh 6-year highs. In addition, last week, price rose above a downward sloping channel which dates to 2002 (green) and halted at horizontal resistance near 122.22.  Horizontal resistance sits above at 123.75, then 2015 highs at 125.68.  However, notice that the RSI is in overbought territory, indicating that it may be time for the USD/JPY to pull back. First support is at the break of the long-term trendline near 121.00, then the psychological round number support at 120.00.  Below there, price can fall to the breakout point of 118.66.

With a lack of focus early in the week, markets will be watching the headlines for progress in the Russian/Ukraine negotiations. In addition, traders will be watching for more clues from Fed members as to what they will do with interest rates.  However, things will pick up later in the week with the OPEC+ meeting and Non-Farm Payrolls.

Have a great weekend.