It feels like the markets are turning a corner. Euro staged a strong rebound overnight on hope of cease-fire in Ukraine. Focus has then turned to Yen today, which is staging a notable recovery in Asia. On the other hand, both Dollar and Sterling are under some selling pressure. Commodity currencies are mixed for now. In other markets, US 10-year yield took a dive and the mostly watched 2-10yr yield curve is about to invert. US stocks shrugged the recession warning and closed higher. Gold is recovering after yesterday’s fall but oil remains heavy.

Technically, firstly, Euro will still have to do more to confirm that it’s in a bullish reversal. Levels to watch include 1.1120 resistance in EUR/USD, 0.8476 resistance in EUR/GBP and 1.0400 resistance in EUR/CHF. These levels are not decisively taken out yet. Secondly, focus will also be on 121.17 minor support in USD/JPY. Break there will confirm short term topping, to be followed by deeper near term correction. 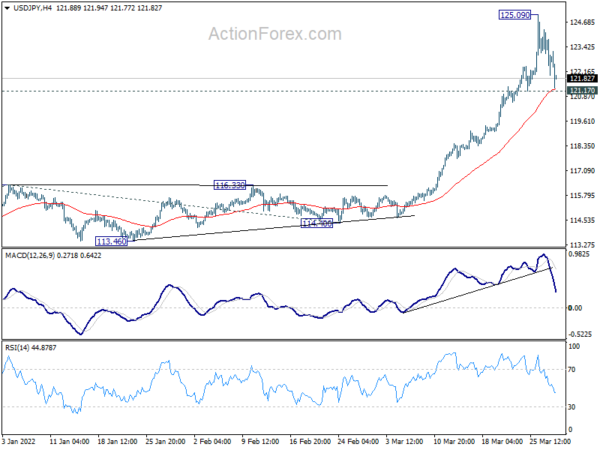 At the same time, NASDAQ has taken out corresponding resistance level at 14509.55. It’s time for DOW to break through 35824.28 resistance to align with the overall developments.

BoJ announced to increase the size of its JGB purchases to defend it’s 10-year yield cap imposed under the yield curve control.

“The BOJ will increase the number of auction dates and the amount of outright JGB purchases as needed, taking account of market conditions,” the BOJ said in a statement.

ANZ said: “With inflation pressures now so extreme, and the RBNZ’s inflation-targeting credibility on the line, it’s full steam ahead for rate hikes – we’re forecasting 50bp hikes in both April and May.

“It could well be a rough ride, but maintaining medium-term price stability is the best contribution monetary policy can make to New Zealand’s big-picture economic prospects from this very difficult starting point.”

Later in the day, main focus is on US ADP employment while Q4 GDP final will be published.

Intraday bias in EUR/GBP remains on the upside with focus on 0.8476 structural resistance. Decisive break there should confirm medium term bottoming at 0.8201, with a head and shoulder bottom pattern too (ls: 0.8282, h: 0.8201, rs: 0.8294). In this case, near term outlook will turn bullish for 0.8697 fibonacci level next. On the downside, however, below 0.8398 minor support will mix up the outlook and turn intraday bias neutral first. 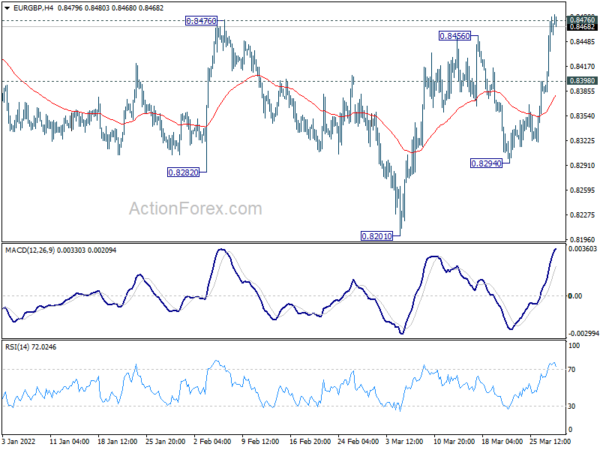 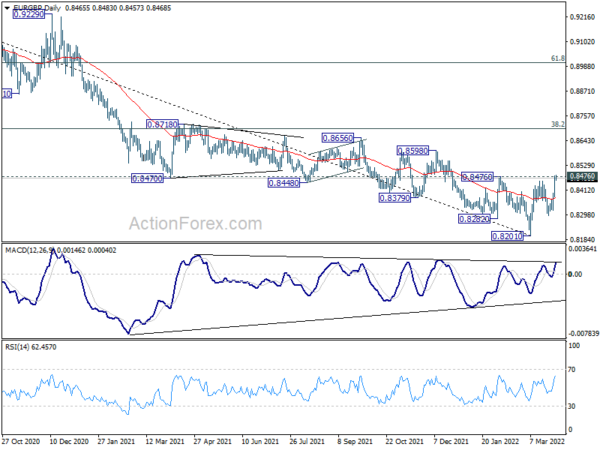