Dollar is trading broadly higher today, with help by upside breakout against Yen. The greenback on remains firm after record PPI reading. Sterling is currently the second strongest, followed by Euro. On the other hand, New Zealand Dollar is trading as the worst performing, even after RBNZ’s 50bps hike. Kiwi followed by Aussie and and then Yen. Canadian Dollar is mixed, awaiting BoC rate hike.

Technically, a focus remains on USD/JPY which is struggling to clear 125.85 long term resistance, despite breaching it. The pair may need some help from other Yen crosses to give it a lift. To be more specific, EUR/JPY and GBP/JPY will need to break through 137.50 and 164.61 resistance respectively to help secure upside momentum in USD/JPY.

Fed Bullard: Getting to neutral isn’t going to be enough

St Louis Fed President said in an FT interview, there’s “a bit of a fantasy” in current policy in centrals banks to think thank inflation could be brought down by moving interest rate to neutral.

“Getting to neutral isn’t going to be enough it doesn’t look like, because while some of the inflation may moderate naturally . . . there will be a component of it which won’t,” he added.

Bullard also warned that this week’s CPI report just ” underscores the urgency that the Fed is behind the curve and needs to get moving.”

“If markets and households get the idea that the Fed’s not going to do the right thing and not going to keep inflation under control, then you have to gain credibility by actually doing things that show them that you are serious,” he said.

In the Joint Economic Forecast, Germany’s government advisors warned of a contraction in the economy next year in case of a full halt in Russian natural gas imports. Inflation could also be pushed further the post-war record.

“If gas supplies were to be cut off, the German economy would undergo a sharp recession. In terms of economic policy, it would then be important to support marketable production structures without halting structural change. This change will accelerate for gas-intensive industries even without a boycott, as dependence on Russian supplies, which have been available at favorable prices up to now, is to be overcome quickly anyway,”Stefan Kooths, vice president of the Kiel Institute for the World Economy said.

“Policymakers should be careful not to provide poorly targeted transfers to cushion high energy prices. If such support schemes are handed out on a wide front, it will further drive up inflation and undermine the important signaling effect of higher energy prices. This in turn exacerbates the problems of low-income households and increases overall economic costs.”

BoJ Governor Haruhiko Kuroda said in a speech today that the economy was expected to pick up on improvement in consumption and robust overseas demand. “The outlook, however, remains highly uncertain due to the impact of the pandemic, as well as developments regarding Ukraine and the impact on commodity prices,” he warned.

RBNZ raises Official Cash Rate by 50bps to 1.50%, larger than expectation of a 25bps hike. That’s also the biggest rate increase in 22 years.

It said in the statement that “moving the OCR to a more neutral stance sooner will reduce the risks of rising inflation expectations.  A larger move now also provides more policy flexibility ahead in light of the highly uncertain global economic environment.”

Also, “the Committee agreed that their policy ‘path of least regret’ is to increase the OCR by more now, rather than later, to head off rising inflation expectations and minimise any unnecessary volatility in output, interest rates, and the exchange rate in the future.”

Australia Westpac consumer sentiment index dropped -0.9% to 95.8 in April, down from March’s 96.6. That’s the lowest level since September 2020. Westpac said “concerns around interest rates and inflation were starting to weigh on confidence… compounded by Russia’s invasion of Ukraine, an associated spike in petrol prices, and severe weather events.”

Westpac expects RBA to raise interest rate at June meeting, after reviewing data releases “over coming months”. Once the tightening cycle starts, Westpac expects a series of rate hikes in most months in 2022, with a pause in September. Further rate hikes can be expected in first half of 2023 and the cash rate would peak at around 2% by June next year.

USD/JPY’s rally resumed after brief retreat and intraday bias is back on the upside. Focus stays on 125.85 long term resistance. Sustained break there will carry larger bullish implication and target 130.04 long term projection level next. On the downside, break of 124.75 minor support will turn bias to the downside for pull back to 4 hour 55 EMA (now at 123.99) and possibly below. 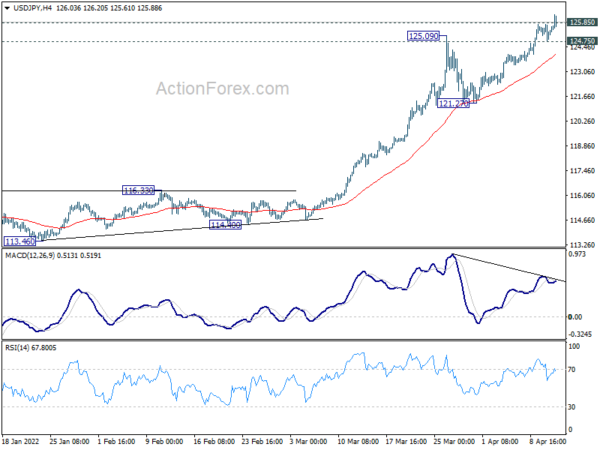 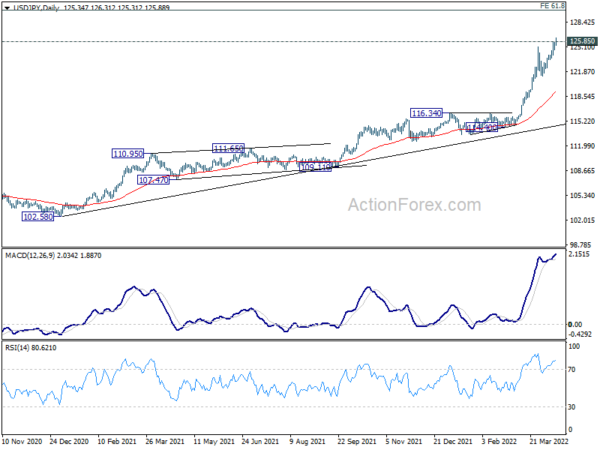