The forex markets trade in tight range in Asian session today. New Zealand Dollar got little support from the RBNZ 50bps rate hike. It’s actually trading as the weakest one for the day at the time of writing. As for the week, Swiss Franc is currently the strongest, with help from buying against Euro. Dollar is following as next strongest and then Aussie. On the other hand, Yen is the worst performing as it’s recovery remains very weak. Canadian Dollar is also soft, awaiting BoC rate decision.

Technically, USD/JPY’s retreat is rather shallow so far. Another test on 125.85 long term resistance could be seen today. Clearing of this resistance could prompt accelerated decline in Yen. In that case, EUR/JPY and GBP/JPY could be pushed through 137.50 and 164.61 resistance respectively, even though European majors are soft. 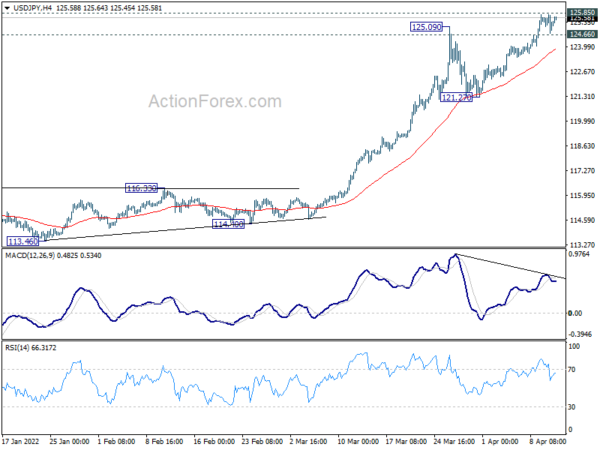 RBNZ raises Official Cash Rate by 50bps to 1.50%, larger than expectation of a 25bps hike. That’s also the biggest rate increase in 22 years.

It said in the statement that “moving the OCR to a more neutral stance sooner will reduce the risks of rising inflation expectations.  A larger move now also provides more policy flexibility ahead in light of the highly uncertain global economic environment.”

Also, “the Committee agreed that their policy ‘path of least regret’ is to increase the OCR by more now, rather than later, to head off rising inflation expectations and minimise any unnecessary volatility in output, interest rates, and the exchange rate in the future.”

NZD/USD gets not much support from RBNZ hike

NZD/USD just receive very brief lift from larger than expected RBNZ rate hike. It struggles to break through 4 hour 55 EMA firmly and risk is mildly on the downside. Break of 0.6805 temporary low will resume the fall from 0.7033 to 0.6728 support. Sustained break there will argue that whole rebound from 0.6728 has completed at 0.7033, and bring retest of 0.6528 low.

More importantly, break of 0.6728 support should also confirm rejection by trend line resistance, which in turn suggests that the choppy decline from 0.7463 is still in progress for another fall through 0.6528 low. 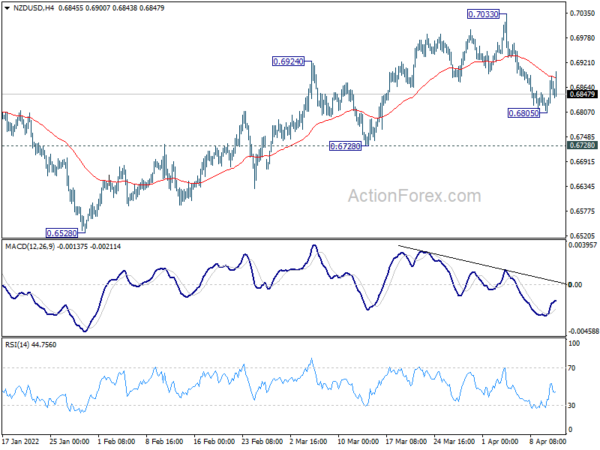 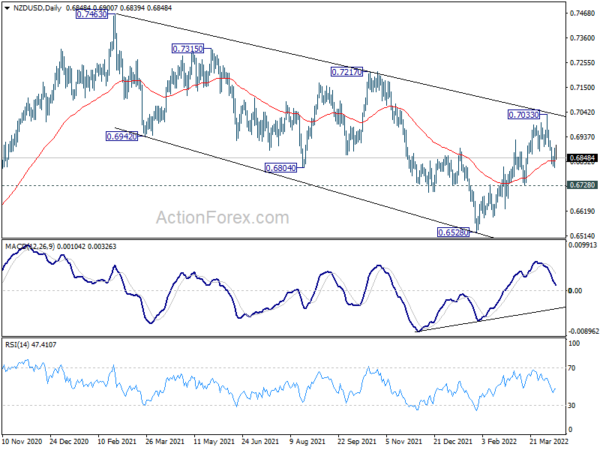 Australia Westpac consumer sentiment index dropped -0.9% to 95.8 in April, down from March’s 96.6. That’s the lowest level since September 2020. Westpac said “concerns around interest rates and inflation were starting to weigh on confidence… compounded by Russia’s invasion of Ukraine, an associated spike in petrol prices, and severe weather events.”

Westpac expects RBA to raise interest rate at June meeting, after reviewing data releases “over coming months”. Once the tightening cycle starts, Westpac expects a series of rate hikes in most months in 2022, with a pause in September. Further rate hikes can be expected in first half of 2023 and the cash rate would peak at around 2% by June next year.

Richmond Fed President Thomas Barkin said yesterday, “the best short-term path for us is to move rapidly to the neutral range and then test whether pandemic-era inflation pressures are easing, and how persistent inflation has become. If necessary, we can move further.”

He added that the actions to combat inflation doesn’t “necessarily require a hard landing.” In fact, “it might help avoid one by convincing individuals and firms that the Fed is committed to our target, thereby cementing inflation expectations.”

Barkin also said that the Fed needs to be “crystal clear that a growing economy requires stable prices, and that we will remain committed to addressing inflationary gusts.”

BoC is widely expected to raise interest rate by 50bps to 1.00% today, to curb inflation which was already at a 30-year high. That would be the first half a percentage point hike since May 2000. The tightening cycle will continue for sure, with some expecting to overnight rate hit 2.50% level by the end of the year. Another point to note is BoC would probably start the plan to unwind its balance sheet, and the pace will be closely watched. 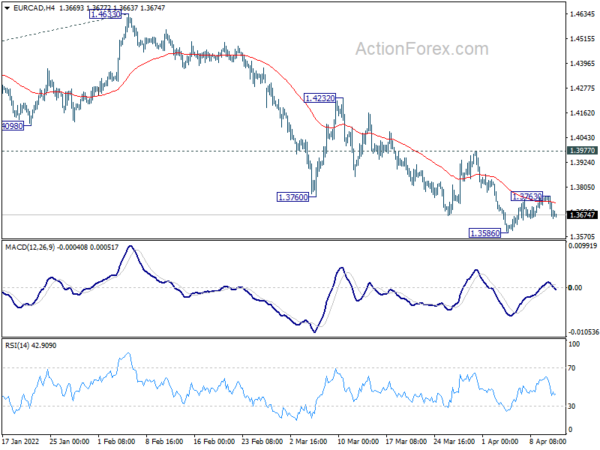 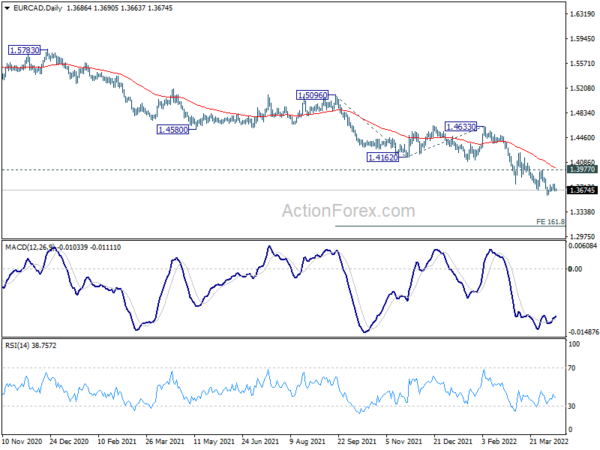 Intraday bias in EUR/CHF remains on the downside as fall from 1.0400 is extending. As noted before, rebound from 0.9970 could have completed already. Deeper fall is now expected to retest 0.9970 low. Decisive break there will resume larger down trend. On the upside, however, break of 1.0204 minor resistance will turn bias back to the upside for 1.0400 resistance instead. 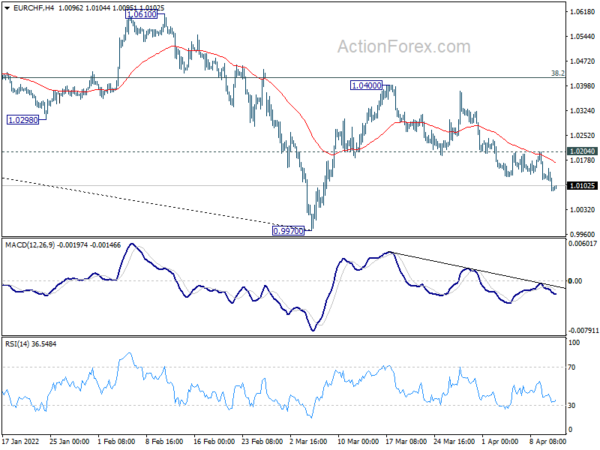 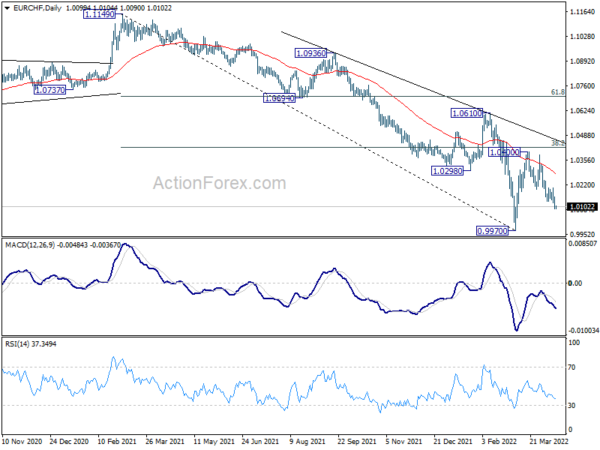