Inflation remained top of mind this week with the Consumer Price Index (CPI) report reminding us once again that price pressures accelerated in March. Overall inflation rose both in month-to-month (+1.2% m/m) and year-over-year (y/y) terms, with the latter reaching 8.5% in March – a new multi-decade high. Energy, especially, and food, to a lesser degree, both contributed to the acceleration. Still, even when excluding these more volatile categories, core inflation (up only a tenth of a percentage point to 6.5% y/y) was at the highest level since the early 1980s (Chart 1). Adding to the evidence that price pressures continued to build through March, supplier prices also rose sharply last month, accelerating to 11.2% y/y – an all-time high for the data stretching back to 2010. 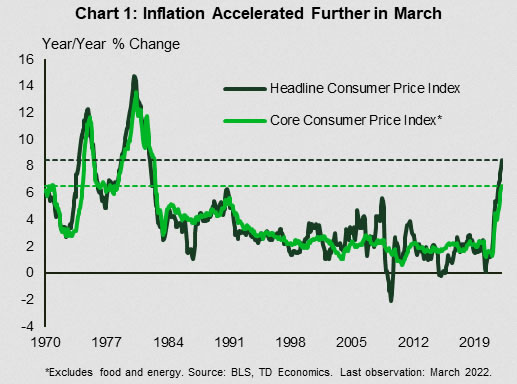 Inflation worries were echoed in the National Federation of Independent Business (NFIB) small business report. Business confidence continued to trend lower, falling to 93.2 in March – the lowest level since 2016 excluding the temporary drop at the start of the pandemic. Businesses were the most pessimistic they have ever been regarding an improvement in the economy ahead from current levels (albeit the bar to improve on the post-pandemic rebound pace is very high). Yet perhaps the most striking aspect of the report is the fact that inflation concerns, barely a factor as the start of last year, have risen sharply, overtaking ‘quality of labor’ concerns recently (Chart 2). This shift suggests that managing inflation’s impact is now the top priority, while securing talent amidst a tightening labor market playing an important second fiddle. 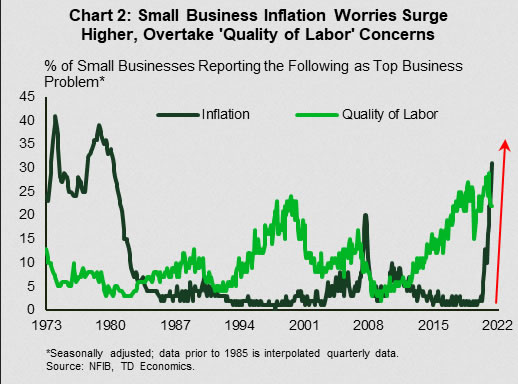 Small business job openings remain plentiful, despite trending lower since peaking in September. Meanwhile, businesses continue to raise wages and plan more increases ahead, with both of these sub-indicators in the NFIB survey ticking higher last month. A growing share of businesses are also passing on the added costs to consumers by raising prices. A net 72% are doing so – a record high in the survey’s almost 50-year history. All these factors, together with the potential for more supply-chain disruptions due to the war in Ukraine, and shutdowns in China, suggest that inflation will continue to run hot in the near-term.

Tilting to retail sales, a 0.5% gain in March and a bulky upgrade to the month prior were positive developments. Gains in March also appeared to be skewed toward “going out” categories – a pattern consistent with the reopening of the economy. A sharp drop in non-store sales (a proxy for online sales) further bolsters this point. Digging deeper, however, the picture is less rosy. Sales in the control group, which exclude volatile categories and are used in calculating personal consumption expenditures, were down 0.1% m/m. Meanwhile, when adjusting headline figures by CPI, the data points a decline in the ‘real’ sales estimate both in monthly and year-on-year terms.

All told, with inflation running hot and still no major cracks in the economic armor, the Fed will need to follow through with the speedy removal of monetary stimulus to try and rein in inflation. Interest-sensitive sectors, such as housing, which is already showing some signs of cooling (see here), are first on the list to feel the pinch from the higher rate environment.

Canada – The Punch Bowl Has Left the Building

It is said that central banks should take away the punch bowl just as the party is heating up. After waiting until Canada’s economic party was in full swing before starting to tighten policy, the Bank of Canada’s (BoC) raised rates an aggressive 50 basis points in its announcement this week – the monetary punch bowl has left the building.

The Bank also announced that it will begin “quantitative tightening” (QT) effective April 25th. This means it will allow its holdings of Government of Canada bonds to mature, which will shrink the size of its balance sheet over time. This is another channel via which monetary policy will be turning more restrictive, as QT will add some upward pressure to bond yields. Five-year Government of Canada bond yields recently surpassed 2018 highs, and are now at the highest level since 2011.

By raising the policy rate by 50 basis points for the first time in 22 years, the BoC reaffirmed its commitment to tame runaway inflation, but also sets up the pace for more aggressive moves. Indeed, the statement accompanying the decision was hawkish. The bank sounded upbeat on the Canadian economic outlook, noting that “the economy is moving into excess demand” and that tight labour market is leading to an acceleration in wage growth.

Even with risks to global growth stemming from the war in Ukraine and lockdowns in China, the Bank was expecting Canadian economic growth to remain robust, with real GDP expanding by 4.2% this year – just a touch slower than 4.6% pace seen last year – and by 3.2% in 2023.

At the same time, the Bank revised up its outlook on inflation, stating that “CPI inflation is now expected to average almost 6% in the first half of 2022 and remain well above the control range throughout this year.” U.S. inflation hit 8.5% year-over-year in March, and the Canadian CPI is expected to surge past 6% mark when the numbers are released next week (Chart 1). With price pressures continuing to mount, the labour market at full employment, and the need to cool domestic demand as well as the housing market, the Bank will be staying firm on rate hikes. We anticipate another 50 basis point increase on June 1st, with the policy rate hitting 2% by year end. 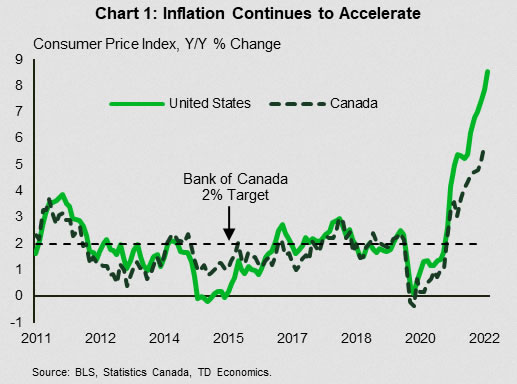 Higher interest rates will tame Canadians’ appetite for credit, cooling household debt growth. However, they will also lead to higher debt payments for existing borrowers (report). Debt servicing costs are expected to rise briskly over the next two years, hitting their pre-pandemic peak by the end of 2023 (Chart 2). The Bank of Canada does not appear to be worried, with discussion of household debt missing from the monetary policy report. Perhaps it is right not to be concerned for now. As long as the Bank can stage a soft landing and job growth persists, most borrowers should be able to accommodate higher interest rates and remain current on their debt obligations. 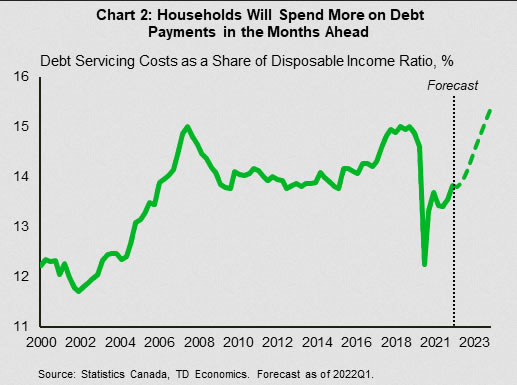