Bond yields across the curve continued to move higher this week, as Fed officials have signaled a growing desire to move quickly in raising rates to quell inflation. This theme has been playing out across global financial markets since the beginning of the year and was echoed by Fed Chair Jerome Powell earlier this week. Speaking at an IMF event, Powell highlighted the importance of “front-loading” the removal of monetary accommodation, solidifying the case for a 50 basis-point rate hike.

The combination of firming rate hike expectations and heightened geopolitical tensions have led to a meaningful appreciation in the US dollar vis-à-vis other majors. Since the beginning of the year, the dollar index has appreciated by over 5%. It currently sits at a level not seen since the onset of the pandemic when heighten uncertainty drove significant safe haven flows into the US. With that in mind, it doesn’t seem like the dollar has much further to run. Longer-term yields are quickly closing in on peak levels not seen since the end of the last tightening cycle, and markets are already fully priced for an additional 200 basis points (bps) of tightening from the Fed this year alone. This is 25 bps higher than the FOMC’s median projection for the fed funds rate, suggesting there’s still some wiggle room for the Fed to adjust its outlook higher without meaningful moving the market. The wildcard remains on the geopolitical front. Further escalations in geopolitical tensions will only drive stronger demand for safe-haven investments, which would ultimately be dollar positive.

On the real economy, we’ve already started to see the impact of higher rates on some interest rate sensitive sectors. Existing home sales declined by 2.7% m/m in March – falling for the second consecutive month – to 5.77M units (Chart 1). However, higher rates aren’t telling the full story. Sales have also been restrained by exceptionally tight inventory, which currently sits at just a 2 months’ supply. For context, a balanced market typically runs anywhere between 4-6 months’ supply. While we are a long way from those levels, housing construction continues to surprise to the upside. 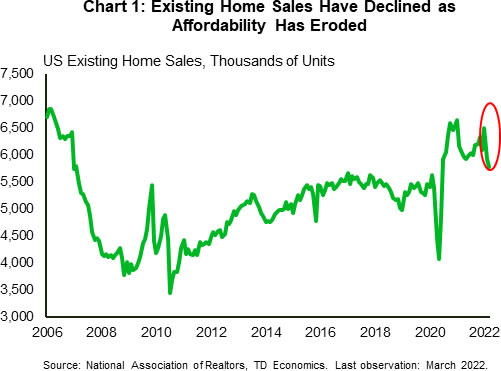 March housing starts rose by 0.3% month-on-month (m/m) to 1.79M (SAAR) units, marking yet another new cyclical high. Over the near-term, it would appear that starts have more room to run. The 3-month moving average of housing permits – a leading indicator for construction – continues to run well above the current level of starts, suggesting there is still plenty of projects in the pipeline.

The sustained strength in housing construction provides evidence that at least some of the headwinds that builders had faced earlier in the pandemic are starting to abate. While sourcing of some materials remains an issue, labor constraints appear to be easing. Over the last year, the construction sector has added more than 200k jobs, and has now completely recouped all of its pandemic related losses. Interestingly, gains have not been spread evenly across the sector. Hiring in residential construction is 5.5% above February 2020 levels, while non-residential construction still has yet to recover from the pandemic. The shifting in employment composition shows that trades workers are going where the jobs are most plentiful, which bodes well for continued strength in residential construction, and should provide some relief to the supply constrained housing market. 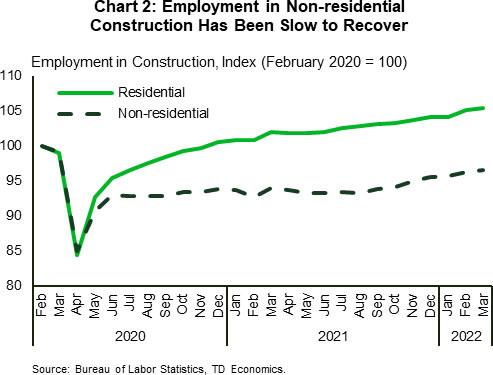 An upside inflation surprise and softening housing data made for a gloomy start to the week on the economic front. The Bank of Canada (BoC) looks set to hike rates another 50 basis points at its next meeting as concerns about engineering a ‘soft landing’ for inflation are sure to mount.

First up this week was the release of housing sales, starts and price data for March. Home sales pulled back, falling 5.4% month-over-month (m/m) to 55k units. While sales were lower in five provinces it was a 20% m/m collapse in the GTA that was the outlier. As sales cooled, so too did new listings – falling a similar 5.5% m/m – keeping the sales-to-new-listings ratio relatively unchanged, and firmly in seller’s territory. That said, average home prices fell (-1.5% m/m) for the first time since July 2021, led lower by Alberta (-3.6%), B.C. (-2.4%), and Ontario (-2.3%). This likely reflected the make-up of March’s sales, as the MLS home price index, which is a apples-to-apples measure (+1.0% m/m), single family prices (+0.6% m/m) and apartment prices (+2.3%) all advanced nationwide. 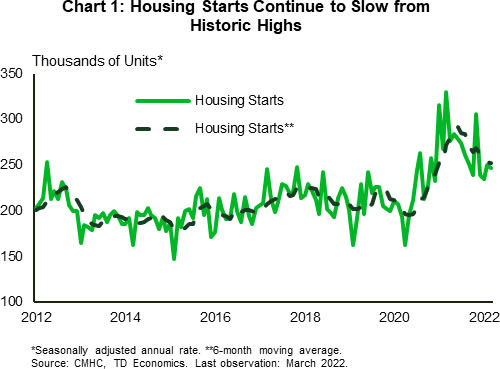 With respect to both sales and starts activity, March is likely the start of a softer patch, as the effects of higher interest rates raise financing costs for builders and further stretch affordability for buyers.

And faster rate hikes are sure to come. March’s CPI report surprised to the upside as total consumer prices rose 6.7% year-over-year, leaving the consensus expectation of a 6.1% gain in the dust. Price gains are increasingly broad based as prices excluding food and energy prices advanced 4.7%. Moreover, as the economic reopening continues, price pressures are spreading beyond goods to services as well, as the measure ticked up to 4.3% y/y from 3.8% in February. Indeed, from the BoC’s perspective all three of its relevant core measures accelerated in March, and are well above the 2.0% target.

High inflation was reflected in February’s retail sales data as well. Total sales edged up 0.1% for the month (7.4 % y/y), but in real terms sales were down 0.4% m/m. February’s softness is likely to prove temporary, with March’s flash estimate of a 1.4% m/m gain suggesting that even with the rapid acceleration in inflation, real volumes will have grown. 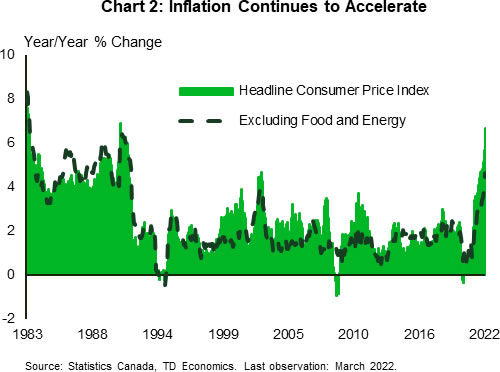 Another 50 basis-point rate hike by the BoC is likely in June, adding headwinds to the housing market while inflation is eroding real retail sales. The expansion continues as the labor market remains strong and the services sector ramps up, but headwinds are building and threaten to throw the economy off course.

This week the IMF and World Bank both released updated projections for the global economy. Both featured substantial markdowns in growth prospects largely due to the economic spillovers from the war in Ukraine, and the ongoing slowdown in the Chinese economy.

The IMF downgraded global growth from 4.2% in the January outlook to 3.6% for 2022. The largest markdowns were in Europe, and Asian nations exposed to rising energy import prices.

Importantly, the outlook incorporated European Union member states decision to end purchases of Russian coal. The policy will take effect later this summer, but the announcement raises questions about the downstream impacts to industry if oil and gas imports from Russia are curtailed. In scenario analysis presented along with the forecast a Russian energy embargo could result in a roughly 3 percent hit to E.U. GDP relative to the baseline projection through 2023.

Country level exposures to Russian energy products vary greatly. For instance, Russian supplies 90% (by value) of the energy product inputs in the coke and refined petroleum product industry in Slovakia and Bulgaria, but only 2% in Spain. More broadly, the E.U.’s largest refining operations (as of 2020) are in Germany, Italy, the Netherlands and Spain. Using the same measure, roughly a fifth of Dutch inputs are Russian sourced, with Italy and Germany not far behind at 17% and 16%, respectively. Germany’s recent commitment to end Russian oil imports by the end of the year leaves domestic refiners looking to replace a key supplier.

Beyond the impact on commodity markets, the war has roiled supply chains once again. Moreover, the worsening COVID outbreaks in China compound the threat. With lockdowns in major cities ramping up in March, China’s first quarter data shed some light on the situation. Despite first quarter GDP growth exceeding expectations by rising 4.8% year-over-year (y/y), the near-term trend is more indicative of mounting issues. Lockdowns proliferated in late-March, and their effect was reflected in March’s 3.5% y/y contraction in retail sales. Due to the timing of restrictions, second quarter data will likely better reflect the impacts of the lockdowns. Moreover, current containment measures in China are hampering logistical networks as truck drivers are caught up in quarantines. Even factories operating under ‘bubble’ like conditions are dealing with reduced capacity and parts shortages, reflected in March’s official PMI data indicating a fall in manufacturing output and a rise in supplier delivery times. 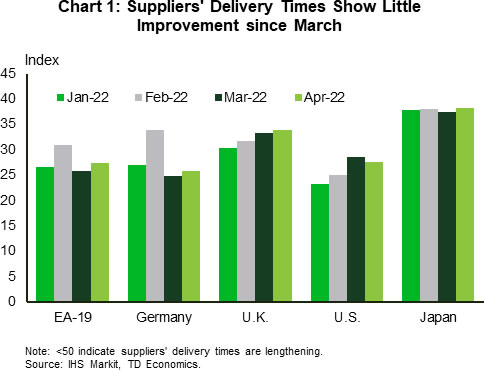 The global economic outlook is increasingly gloomy. Supply side factors continue to fuel inflation and risk shifting medium-term inflation expectations higher. The longer the supply side shocks persist, the greater the risk that central bankers may be forced to raise interest rates to re-anchor inflation expectations, regardless of the macroeconomic circumstances.