GBPUSD collapsed to 1.2380 by 2% or more than 230 pips from the start of the day on Thursday, with pressure intensifying after the Bank of England’s bank rate decision announcement.

As analysts had expected, the Bank of England raised the rate by 25 points to 1.0%. Three of the nine monetary policy committee members called for a 50-point increase at once, and there were hints in the comments that a 50-point increase could be an option at subsequent meetings.

At the same time, the Bank of England has worsened its economic outlook for 2023, expecting the economy to contract in response to tight financial conditions and the effects of high energy prices. The currency market sees the recession as a notable negative factor, putting pressure on medium and long-term interest rates.

After consolidating over the last few days and attempting a rebound yesterday after the FOMC, GBPUSD has moved sharply back down and updated to lows from June 2020, a strong bearish signal. 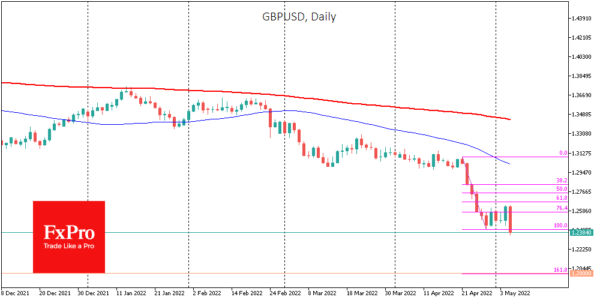 The pair runs the risk of slipping to 1.2000, an area proven to be the Pound’s last line of defence more than once in previous years, without much of a hurdle.

The significant support of the previous six years and the 161.8% Fibonacci target from the last declining momentum since late April are concentrated here.