The Weekly Bottom Line: Tight Corners of the Economy

U.S. – Tight Corners of the Economy

This was a big week for the U.S. economy with a Federal Reserve interest rate decision and early macroeconomic indicators for the month of April. As widely anticipated, the Fed raised the monetary policy rate by 50 basis points for the first time since 2000. More tightening is in the works: we anticipate the central bank will hike the fed funds rate in two more 50 basis point moves at its next two meetings. A that point, we expect it to return to more gradual quarter-point adjustments (see Dollars & Sense). Chair Powell’s push back against the possibility of a larger hike was first accepted as bullish by the equity market, but the sentiment reversed quickly pushing the equity market a quarter of a percent lower and bond yields 15 bps higher for the week (at the time of writing).

This morning’s jobs report surprised with 428k jobs added in February, according to the payrolls survey, well above 380k anticipated by forecasters. The unemployment rate, which is measured by the household survey held steady 3.6%. The labor force – a measure of people working or actively looking for work – dropped unexpectedly, pushing the participation rate down to 62.2%. As a result, an already sizeable shortfall relative to the pre-pandemic trend, expanded even further (Chart 1). Without progress on this front, the labor market will remain very tight, providing little relief for businesses already struggling to attract workers. 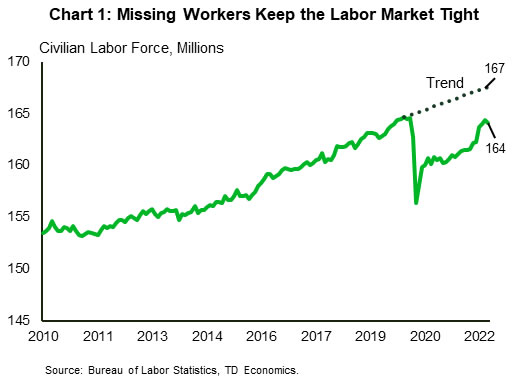 Meanwhile, leading business indicators – the ISM purchasing managers indexes – came in weaker than expected by the consensus, while remaining in the expansionary territory. The manufacturing sector decelerated for the second month in a row. All major subcomponents but the supplier deliveries index declined, with the largest drop in the employment index. Softness in demand is consistent with our expectation that consumers start to cut back on manufactured products in favor of services. In this context, a deceleration in the services sector was somewhat disappointing. The underlying details suggest that current business activity accelerated, but new orders and new export orders slipped. Another drag was the employment sub-index, which dropped back into the contractionary territory, likely due to “hypercompetitive” demand for workers, as suggested by one of the purchasing managers.

Importantly, supply constraints and challenges in logistics continue to create a mismatch between demand and supply in both sectors of the economy. Comparing to history, the supplier delivery index has been unusually strong since March of 2021, creating a wedge between this sub-component the rest of the index’s drivers (Chart 2). Another way to think about it is that delivery times remain atypically slow relative to softer demand. 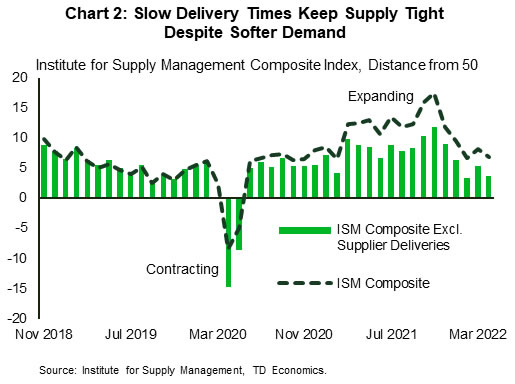 Should supply fail to improve in lock steps with demand softening, inflation is likely to remain elevated. This will make it more difficult for the Fed to soften growth without crushing the economy into a recession. The good news is that the strength of consumer finances points to a softening in spending, rather than an outright retreat. This should help the Fed navigate the economy out of its tight spot.

For the housing market, the most important yield is on the 5-year Canada, which drives the pricing of many mortgage products and is hovering near 24-year highs. And, with the Bank of Canada taking their policy rate higher, rates on variable mortgages are on the rise as well. This means that there’s nowhere to run, nowhere to hide for potential buyers. Affordability is rapidly eroding, and housing demand is softening.

This week brought fresh evidence that the housing market correction intensified in April (Chart 1). Home sales declined in month-on-month terms in Calgary and Vancouver but plunged nearly 30% in one month in Toronto. The latter region seems to be the real outlier here, as supply/demand conditions are now closer to favouring buyers, and average prices were down 6.4% during the month. In contrast, markets remained quite tight in Calgary and Vancouver and price growth seems to have been stronger. It’s no great surprise that Toronto’s market is correcting more than these other jurisdictions – this is the other side of the rapid runup in prices that had Toronto challenging for the most expensive market in all of Canada in recent months. 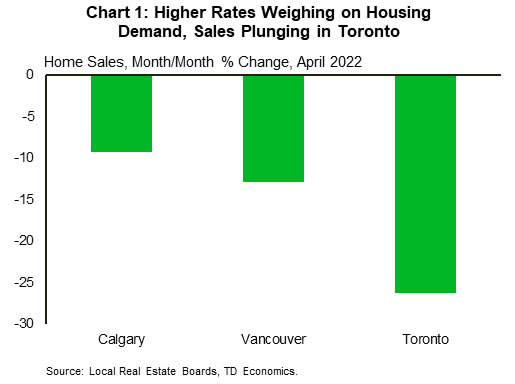 Of course, the Bank of Canada is not done hiking rates. Our updated forecasts see the central bank taking its policy rate to 2% in very short order before shifting to a more gradual rate hike cadence, ultimately finishing the year at 2.5%. This means that further downward pressure is in store for Canadian home sales and prices.

While the interest-sensitive housing sector is softening under the weight of higher rates, the overall economy seems to have taken a breather last month as well. This morning’s jobs report showed that employment expanded by 0.1% m/m (or 15k positions), but hours worked dropped 1.9% m/m. Other details were soft, as full-time employment dropped. However, the more modest jobs gain follows a massive 409k positions being added in February and March, and the drop-in hours worked only partially retraces the large gains made during those two months (Chart 2). Moreover, some of the decline was due to COVID-19 related absences. In addition, job growth of 15k is only a touch below the long-term average and was made in the context of an economy operating in excess demand. 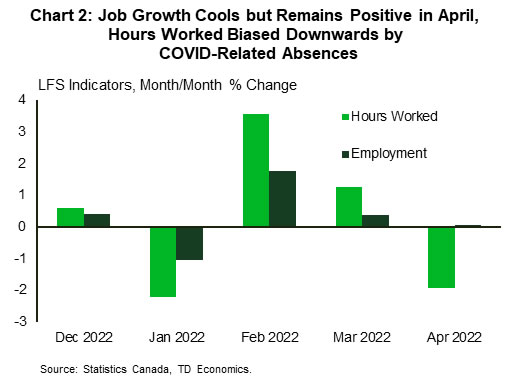 While the decline in hours worked throws some cold water on the Bank’s forecast for a 6% annualized Q2 expansion in GDP, the jobs report is not going to knock the Bank off its tightening course. Expect a 50 bps move in June.