Cable fell below 1.23 handle after US CPI data came above expectations in April, but dip stayed above new 2022 low (1.2260) posted on Monday and subsequent bounce pushed the price to the mid-point of the near-term range which extends into fourth straight day.

Persisting high US inflation adds to expectations that the Fed would step up with policy tightening, bringing the possibility of 0.75% rate hike back on the table that would offer fresh support to the US currency and maintain pressure on sterling.

However, markets need to digest the data to give clearer near-term direction picture, as triple Doji on daily chart and indicators emerging from oversold territory signal that bears may take a breather for correction, attempt to counter strong bearish signal from rise in closely watched core CPI (Apr m/m 0.6% vs 0.4% f/c and Mar 0.3%) that works in favor of Fed’s more aggressive approach. 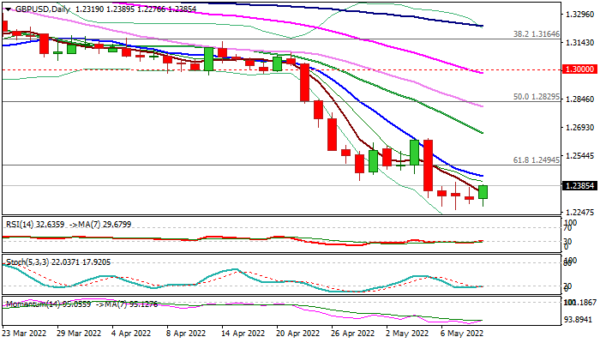