Swiss Franc Won the Week, But Aussie Could Jump on Turnaround Sentiment

It was another roller-coaster week. Swiss Franc ended as the strongest one after SNB Chairman Thomas Jordan surprisingly said it’s ready to act if inflation solidified. But it should reminded that he reiterated the readiness on intervention too. Euro was somewhat pressured due to selling in crosses. Dollar, Canadian and Yen were the worst performing ones.

Stocks in the US displayed some resilience in spite of the volatility. There is prospect of fulfilling an oversold bounce soon. At the same time, benchmark yields were extending their near term consolidation. The developments could cap any rally attempt in Dollar, and even trigger some deeper selloff for the near term. Meanwhile, as Chinese market stabilizes, Aussie could try to lead other commodity currencies for an extended rally ahead.

“Delayed” oversold bounce due for US stocks

It’s another week of roller-coaster ride in US stock markets. But after all, DOW, S&P 500 and NASDAQ did manage to close above prior week’s low. While the call for bottoming last week was too early, the outlook still warrant an oversold bounce very soon. 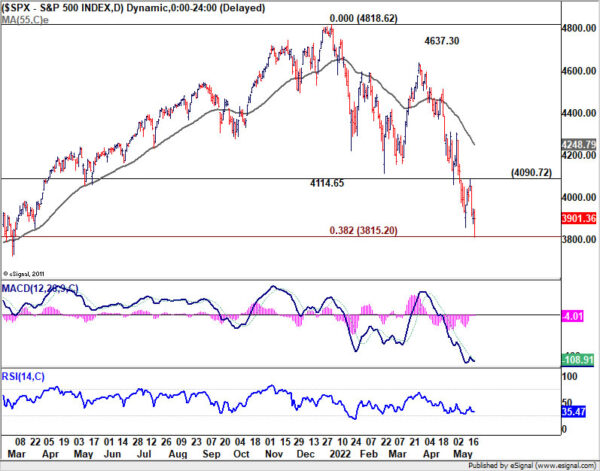 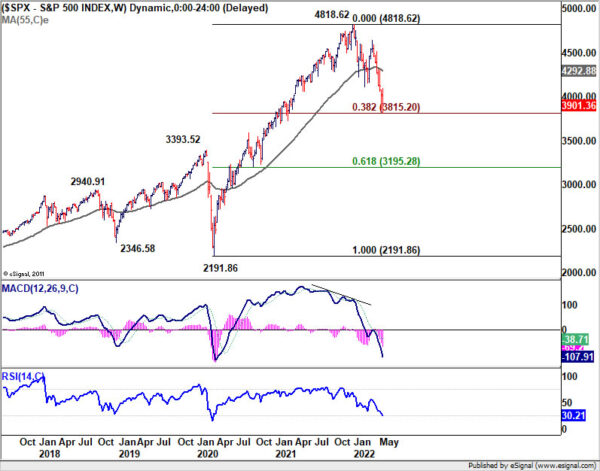 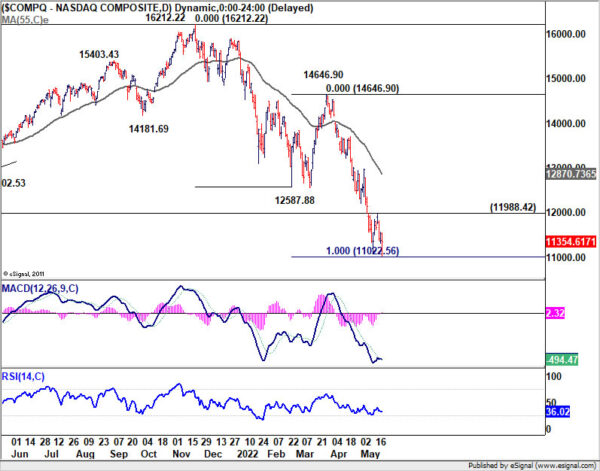 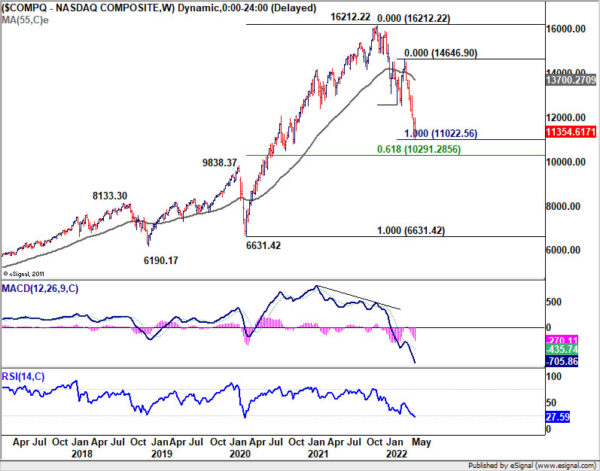 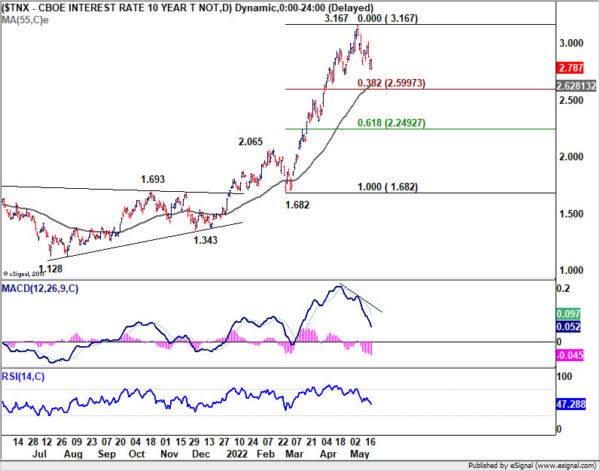 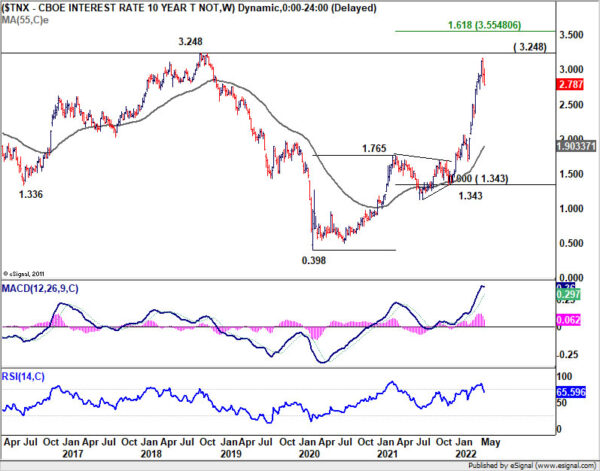 Extended correction in US 10-year yield would exert some downside pressure in Dollar. If markets do turn risk on as expected above, the pull back in Dollar could accelerate. Dollar index’s retreat from 105.00 is so far shallow. But firm break of 102.35 support will raise the chance that it’s correcting whole up trend from 89.53. In this case, deeper decline would be seen back to 55 day EMA (101.14) and possibly below. 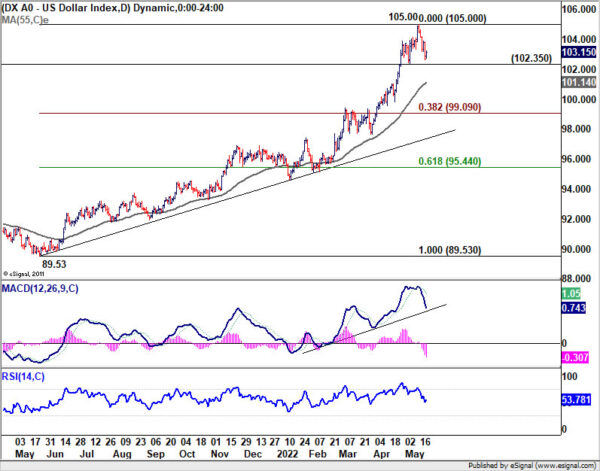 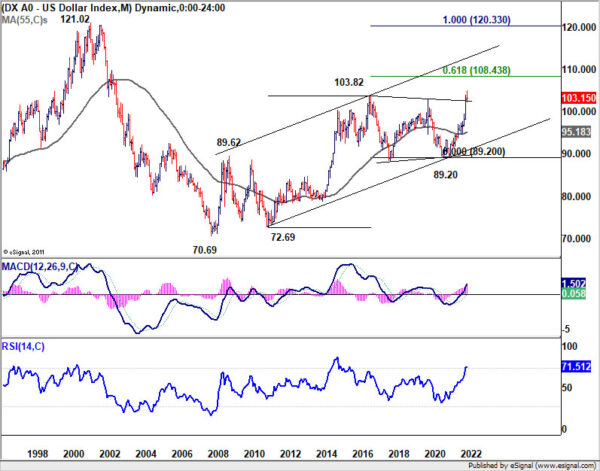 If the markets develop as above, with rebound in stocks and extended pull back in yield and Dollar, commodity currencies could have a chance to stage a more sustainable rebound. In particular, the selloff in Chinese yuan should have passed its climax. Rebound in the Chinese currency together with stabilization in the markets here, could give Aussie (and Kiwi too) an extra hand. 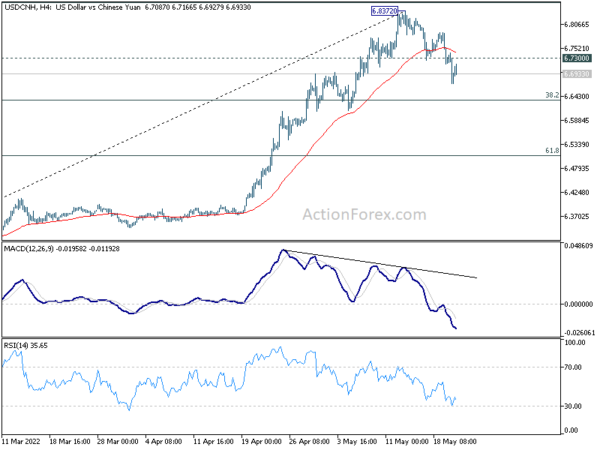 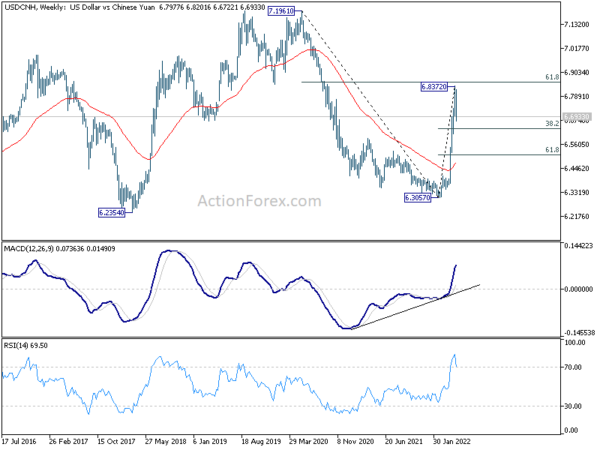 Break of 91.15 in AUD/JPY would confirm completion of correction

To secure a sustainable rally, Aussie will also have to overcome Yen too. That is, AUD/JPY will need to break through 91.15 minor resistance. Such development would add to the case that whole corrective fall from 95.73 has completed with three waves down to 87.28. Further rise should be seen back to 94.00/95.73 resistance zone. That could also help set AUD/JPY up for medium term up trend resumption. 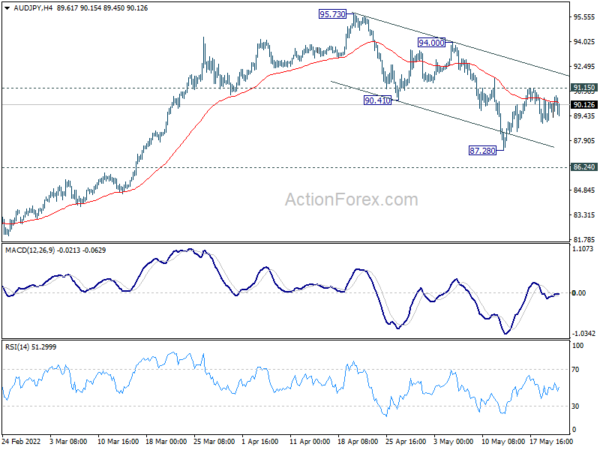 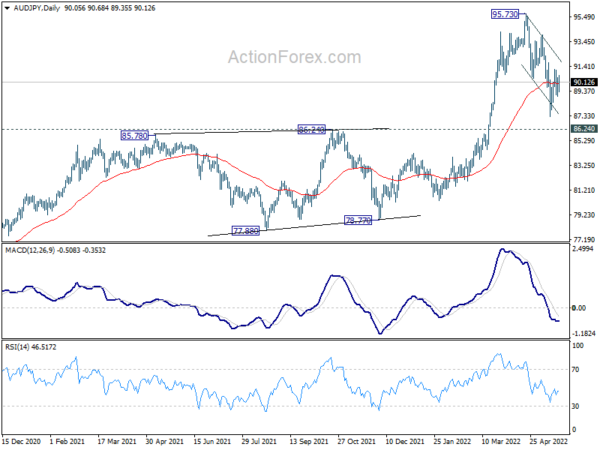 EUR/CHF’s decline last week argues that corrective rebound from 0.9970 has completed with waves up to 1.0513, after rejection by 1.0505 key resistance. Initial bias stays on the downside this week for 1.0186 support first. Break there will target 1.0086 next. On the upside, above 1.0359 minor resistance will turn intraday bias neutral first. But risk will now stay on the downside as long as 1.0513 resistance holds. 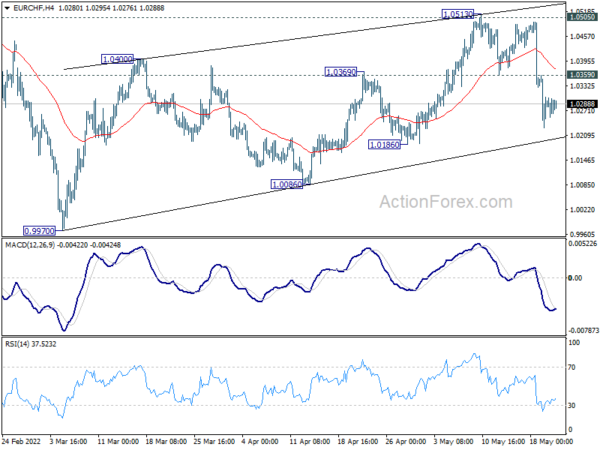 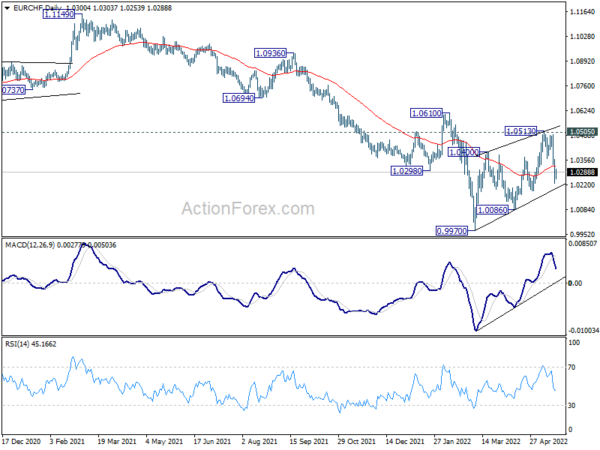 In the long term picture, capped below 55 month EMA, EUR/CHF is seen as extending the multi-decade down trend. There is no prospect of a bullish reversal until some sustained trading above the 55 month EMA (now at 1.0876). 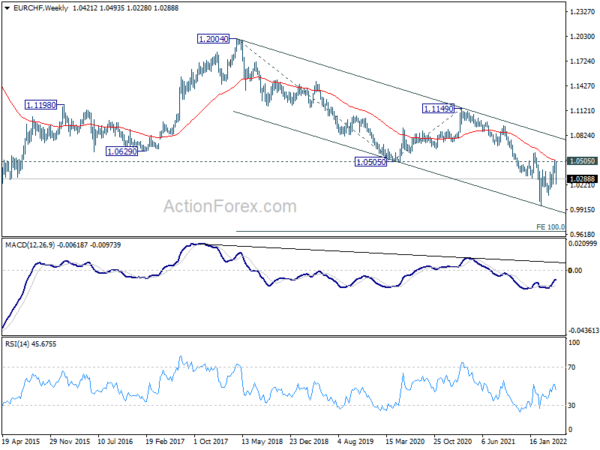 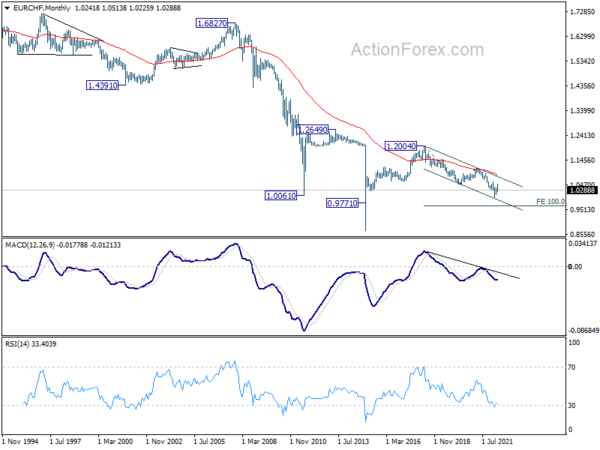