GBPJPY has experienced a sharp decline after peaking at the six-year high of 168.41 in early April. However, the pair has managed to find its feet and is currently trading sideways, while near-term risks seem to be tilted to the upside.

The momentum indicators endorse a cautiously positive tone. The stochastic oscillator is sloping upwards after posting a bullish cross, while the RSI is trying to cross above its 50-neutral threshold.

Should buying pressure persist, initial resistance could be encountered at the 161.00 psychological mark. Jumping above this region, the bulls could aim at the 161.87 barrier before the attention shifts to 164.62. Violating this area, the price may ascend to challenge the 6-year peak of 168.41.

On the flipside, bearish actions could push the price towards the crucial 158.00 support level. Diving beneath that region, the 155.60 barricade, which overlaps with the 200-day simple moving average (SMA), might prove to be the next obstacle for the bears. Failing to halt there, the February low of 150.97 could appear on the radar, a violation of which would set the stage for 148.96.

In brief, GBPJPY appears to be attempting to push higher and partially erase its recent pullback. Nevertheless, a dive below the 155.60 floor may signal the resumption of its recent downtrend. 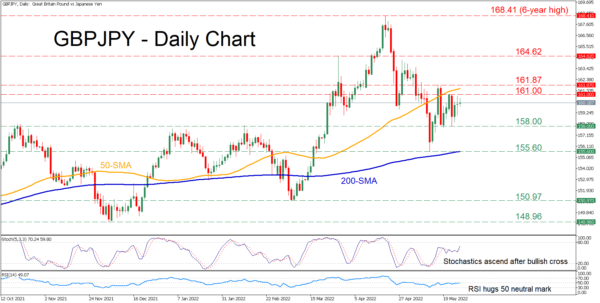