Australian Dollar is leading commodity currencies higher again, on the back of positive market sentiment. The Aussie is additionally support by better than expected GDP data, which affirms the case for more RBA rate hike. Canadian Dollar is also firm, awaiting BoC’s hawkish rate hike. Yen is the worst performing one, following the rally in treasury yields. European majors are also weak, but by a distant to Yen. Dollar is mixed in the middle and would probably need some very strong non-farm payroll data to revive its strengthen.

Technically, AUD/JPY’s upside acceleration, as seen in 4 hour MACD, affirms the case that it’s resuming medium term up trend. Further rally is expected as long as 91.57 minor support holds. Break of 94.00 will add more weight to this case and target 95.73 high and above. At the same time, focus will be on when CAD/JPY would break through 102.93 high to confirm up trend resumption. 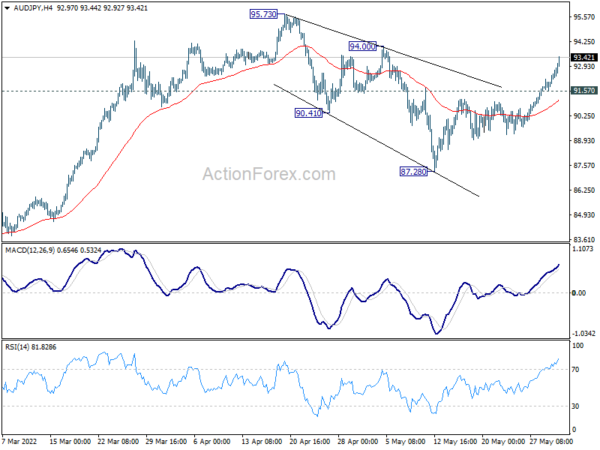 Chris Williamson, Chief Business Economist at S&P Global Market Intelligence said: “Euro area manufacturers continue to struggle against the headwinds of supply shortages, elevated inflationary pressures and weakening demand amid rising uncertainty about the economic outlook. However, the manufacturing sector’s deteriorating health has also been exacerbated by demand shifting to services, as consumers boost their spending on activities such as tourism and recreation.

Rob Dobson, Director at S&P Global Market Intelligence, said: “The rate of expansion in UK manufacturing output eased to a seven-month low in May as companies face a barrage of headwinds. Factories are reporting a slowdown in domestic demand, falling exports, shortages of inputs and staff, rising cost pressures and heightened concern about the outlook given geopolitical uncertainties. The consumer goods sector was especially hard hit, as household demand slumped in response to the ongoing cost of living crisis.

“With both input costs and selling prices rising at rates close to April’s peaks, the surveys suggest that there is no sign of the inflationary surge abating any time soon. Manufacturers continue to report issues getting the right materials, at the right time for the right price, and energy prices remain a major concern.”

BoJ Deputy Governor Masazumi Wakatabe said in a speech, “since rises in energy and food prices are mainly caused by cost-push factors from abroad, it is desirable to respond to them through measures other than monetary policy.”

“Possible options include fiscal policy and energy policy to reduce Japan’s dependence on petroleum and natural gas,” he added.

For monetary policy, “it is necessary to persistently continue with monetary easing and thereby continue to steadily support the virtuous cycle in the economy and maintain an environment in which wages rise,” he said.

“In addition, if downside risks to the economy materialize, the Bank should not rule out taking the necessary additional easing measures without hesitation.”

China Caixin PMI Manufacturing rose from 46.0 to 48.1 in May, below expectation of 49.4. Caixin said output and new orders both declined at slower rates. Suppliers’ delivery times continued to lengthen markedly. Output charges fell, despite further rise in costs.

Wang Zhe, Senior Economist at Caixin Insight Group said: “The negative effects from the latest wave of domestic outbreaks may surpass those of 2020. It’s necessary for policymakers to pay attention to employment and logistics. Removing obstacles in supply and industrial chains and promoting resumption of work and production will help to stabilize market entities and protect the labor market. Also, the government should not only offer support to the supply side, but also put subsidies for people whose income has been affected by the epidemic on the agenda.”

The terms of trade rose 5.9%, with export (+9.6%) and import prices (+3.5%) both up strongly. Strong demand for Australia’s mining and agricultural commodities amidst supply constraints in other producing nations contributed to the rise in export prices.

The domestic final demand implicit price deflator rose 1.4%. This was the strongest growth since the introduction of the Goods and Services Tax, reflecting high levels of demand and increased input costs.

Also from Australia, AiG performance of manufacturing index dropped sharply from 58.5 to 52.4 in may.

Intraday bias in USD/CAD remains on the downside. Decline from 1.3075 is in progress for 1.2401 support. . Firm break there will argue that whole rebound from 1.2005 has completed. Deeper fall would then be seen to retest this low. On the upside, above 1.2763 minor resistance will mix up the near term outlook and turn intraday bias neutral first. 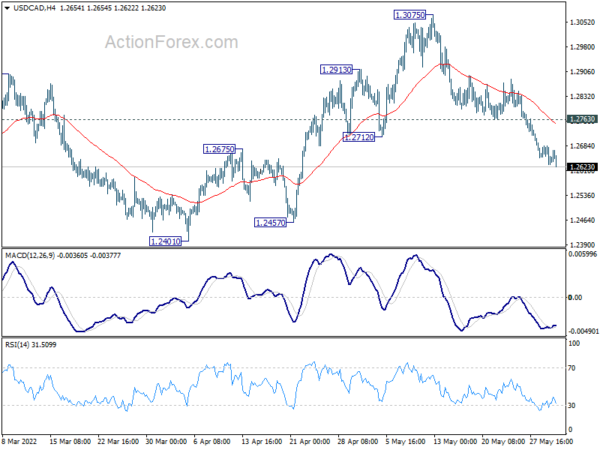 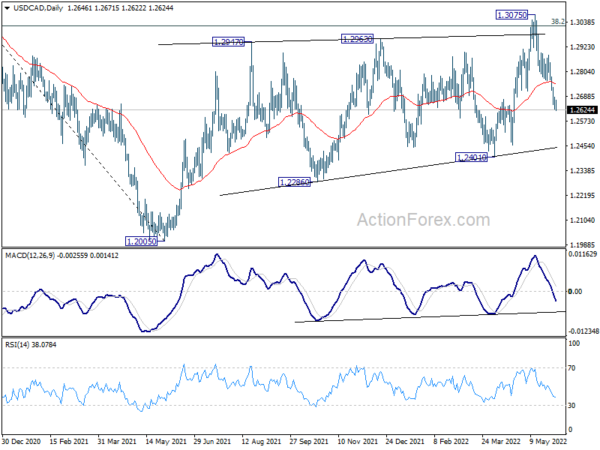