WTI oil futures (July delivery) extended their series of higher highs up to $123.15 on Wednesday before easing a bit – the highest in three months – aiming to mark a fourth consecutive week of wins.

The 78.6% Fibonacci retracement of the previous downleg is currently capping upside moves at $122.30, though a bigger challenge is expected to be the crucial $124.70 bar, which the bulls could not successfully claim last March despite surging to 13-year highs.

Technically, upside pressures could dominate in the short term as the RSI maintains a clear positive trend well above its 50 neutral number, while the MACD has yet to show any sign of abating, remaining elevated within the positive region and above its red signal line. The former, though, is not far below its 70 overbought level, suggesting that any potential advances in the price could come at a softer pace.

Should the price successfully cross above the $124.70 barricade, the rally may initially pause within the $127.00 – $130.50 constraining zone, which was somewhat of a hurdle during the second half of 2008. Breaching that wall, the next resistance could develop near $139.00, while higher, the bulls will attempt to stretch the broad positive trend beyond the 2008 top of $147.27.

In the event the $122.30 level stands firm, the price could ease to test the area between the 61.8% Fibonacci of $118.32 and the red Tenkan-sen line at $117.00. Moving lower, the 20-day simple moving average (SMA) currently at $114.18 may attract some attention before the key 50% Fibonacci of $111.35 comes under examination. The 38.2% Fibonacci of $106.82, which is currently  intersecting the 50-day SMA, could be the next destination, while the ascending trendline drawn from the low of $62.25 will provide the last opportunity for a rebound before traders lose confidence on the seventh-month-old uptrend.

Summarizing, WTI oil futures look to have some bullish fuel in store, though only a sustainable extension above $124.54 would motivate fresh buying in the market. 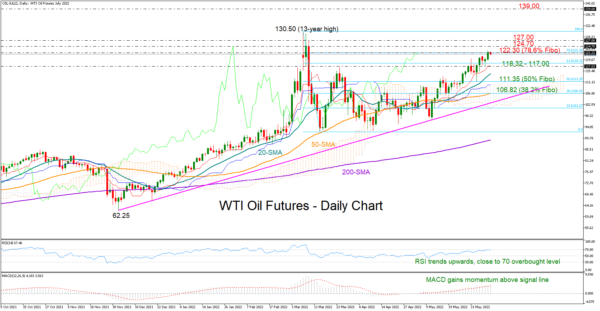