The Weekly Bottom Line: The Good, the Bad and the Ugly

Market anticipation built through the week for Friday’s CPI data release. Inflation came in above expectations and markets reacted by ratcheting up their expectations for rate hikes. Financial markets have now priced in three consecutive 50 basis-point hikes, starting with next Wednesday’s FOMC decision. The 10-Year Treasury yield jumped seven basis points on the news, finishing the week 18 basis points higher at 3.11% (at the time of writing). Equity markets’ timid attempts to regain their footing early in the week came crashing down Friday, as Thursday’s sell-off intensified.

Indeed, “ugly” seems like an appropriate epithet for May’s CPI print. Energy prices pushed the headline print to a new 40-year high. Since May, the nationwide average retail gasoline price has continued to rise and is likely to reach $5 per gallon in the coming days. This will keep the headline reading elevated in June. Food prices also continued to accelerate, adding to the headline print.

Excluding energy and food, May’s month-on-month core inflation matched the April’s reading. What came as a surprise was an acceleration in core goods inflation. In turn, core services inflation, which tends to be stickier and less volatile, decelerated only slightly remaining above last year’s average (Chart 1). This suggest that core inflation – the main yardstick for monetary policy– is not coming down to a level the Fed would like it to be at any time soon. What’s needed is a further easing in demand, particularly for goods, to lower price pressures. Since some retailers are starting to discount their merchandise in the wake of excessive inventories, we expect pressures there to ease in the coming months. 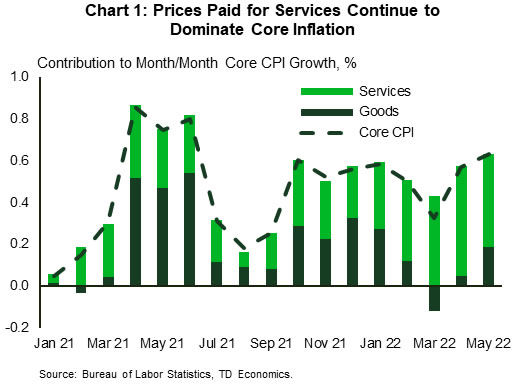 Some good news came from trade data. The U.S. trade deficit narrowed in April to $87.1 from a record of $107.7 billion in March. Over the past two years demand for imported goods outweighed the value of American exports, contributing to a significant wedge in the trade balance, but this week’s report delivered a snapback, providing some evidence of declining demand for imported items. Meanwhile, exports of goods and services expanded. Trade data is quite volatile and it’s possible to see it zag after the current zig, but we think the recent report portends a reversal of the two-year trend, and we will see the gap narrowing further, adding to GDP growth in the second quarter.

Meanwhile, consumer credit made bad headlines this week as it expanded by $38.1 billion in April after an already sizeable increase in March. This increase suggests that consumers are relying more on credit for their purchases, which could become a burden should they face trouble repaying this debt. Zooming in on details, however, much of this growth was due to an acceleration in revolving credit, which has only just recovered to its prepandemic level(Chart 2). This conincides with a normalization in spending on discretionary services, such as in-person entertainment and travel, which are usually financed by revolving credit, such as credit cards. As long as household income stays on the rise, credit growth should remain sustainable. 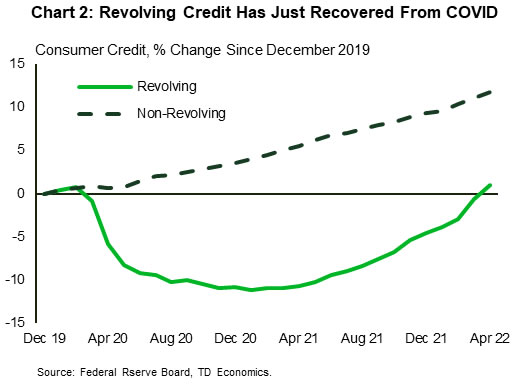 May’s jobs data and The Bank of Canada Financial System Review (FSR) made for an eventful week in Canada. Thursday’s FSR report offered an update on key risks to Canada’s financial system. While maintaining that financial institutions remain resilient, the Bank sounded more concerned about elevated household debt and home prices, stating that those vulnerabilities have worsened. In particular, many Canadians have taken out mortgages which are large relative to their income during the pandemic, often by taking advantage of ultra-low variable rates (Chart 1). These borrowers are more vulnerable to higher interest rates, an income shock or a house price correction. 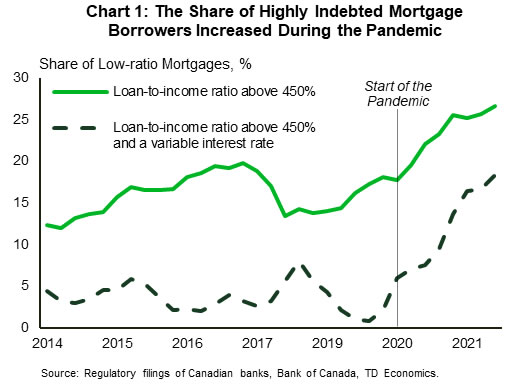 BoC Governor Macklem and Senior Deputy Governor Rogers’s comments at the press conference accompanying the report’s release made headlines. Macklem struck a decisively hawkish tone stating that they are “not going to sleep easy until Canadians can stop worrying about inflation” and that “the likelihood that the rate will need to go to the top of the 2-3% range or possibly somewhat above it … has increased.”

The governor also stated that the economy was overheating. Indeed, May’s jobs report supported the notion that the Canadian economy is operating beyond full employment (Chart 2). Canada saw a net gain of 40k jobs, record low unemployment and rising wages in May’s labour force survey. While rising employment and wages are helping to ease the drag of inflation on household finances, they are also adding more fire to domestic demand, complicating the job for the BoC. As a result, the jobs report further adds to the speculation of even higher interest rates, with short-term bond yields moving higher today. 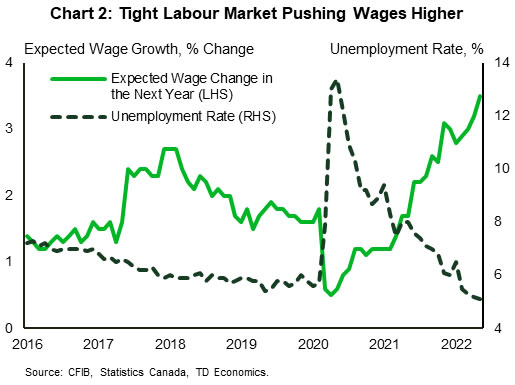 The Bank is working hard to convince consumers and businesses that it will be able rein in inflation before higher inflation expectations become firmly entrenched. But, keeping inflation expectations anchored might not be easy while gasoline prices set new records (up a few cents from last week and 56% from a year ago) and food prices remain elevated. According to the survey conducted by Statistics Canada, Canadians are feeling higher food and energy costs acutely: 43% answered that food was the area where they were most affected by rising prices in the last six months, while 32% said it was transportation.

All in all, this week’s developments suggest that the BoC is leaving the door open for an outsized 75 basis point hike in July, particularly if the incoming data shows that inflation and inflation expectations continue to drift higher. However, while the Bank might be eager to stomp out inflation, two years of ultra-low interest rates have allowed vulnerabilities to build up. As a result, reining in inflation while at the same time achieving a soft landing now becomes a “delicate” act.