Selloff in Aussie and Kiwi intensifies today following the steep decline in commodities. Safe-have flows continue to boost the Japanese Yen, which is additionally lifted by extended pull back in US and European benchmark yields. As for the week, Dollar is the strongest one, but the second placed Yen has the potential to overtake it. There is little chance for Aussie and Kiwi to reverse their worst performer places for the week. 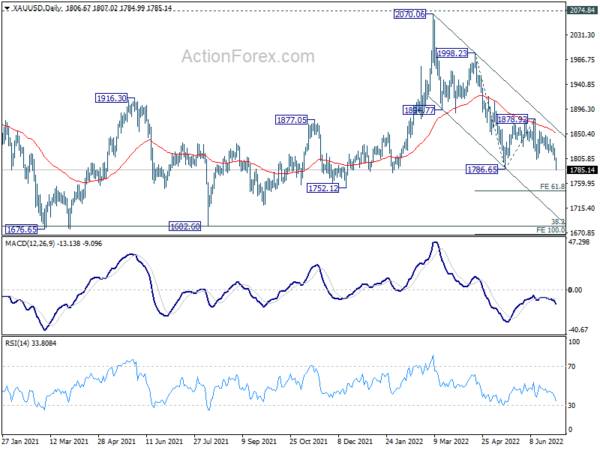 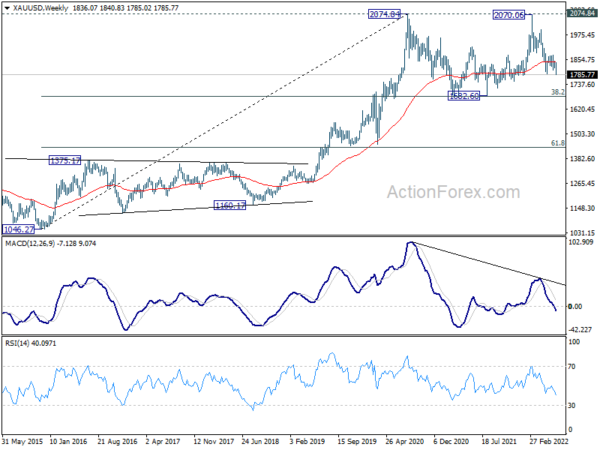 Chris Williamson, Chief Business Economist at S&P Global Market Intelligence said: “Eurozone manufacturing has moved into decline in June, with production dropping for the first time for two years amid a steepening downturn in demand…. The downturn looks set to gain momentum in coming months…. One upside to the recent weakening of demand is an alleviation of some supply chain constraints, which has in turn helped cool inflationary pressures for industrial goods. With the survey data indicating an increasing likelihood of the manufacturing sector slipping into a recession, these price pressures should ease further in the third quarter.”

Rob Dobson, Director at S&P Global Market Intelligence, said: “UK manufacturing output growth ground to a near standstill in June, as intakes of new work contracted for the first time since January 2021. Domestic market conditions became increasingly difficult and foreign demand fell sharply again… Business confidence took a hit as a result, dipping to its gloomiest since mid-2020… “There were some welcome signs that supply-chain constraints and cost inflationary pressures may have passed their peaks. However, with these constraints still elevated overall and demand headwinds rising, it is likely that UK manufacturing will see the economic backdrop darken further in the second half of the year.”

Japan Tankan survey showed that large manufacturer sentiment dropped to lowest in more than a year. But note improvement was seen in the non-manufacturing sector. Also, the strong capital expenditure plan was a big surprise, showing that corporate spending was still robust despite increasing uncertainty.

Consumer inflation expectations rose from 1.8% to 2.4%. Three years ahead, consumer prices are expected to rise 2%, up from 1.6%.

Usamah Bhatti, Economist at S&P Global Market Intelligence, said: “June PMI data pointed to a softer expansion of the Japanese manufacturing sector… Panel members often commented that rising price and supply pressures amid sustained disruption and delays had held back activity in the sector… That said, the degree of optimism regarding the 12-month outlook for output strengthened to a three-month high in June… This is broadly in line with the estimate for industrial production to grow just 2% in 2022 before an acceleration in 2023.”

Wang Zhe, Senior Economist at Caixin Insight Group said: “Restoration in the post-pandemic era remained the focus of the current economy, yet its base was far from strong. Deteriorating household income and expectations caused by a weak labor market dampened the demand recovery. Correspondingly, supportive policies should target employees, gig workers and low-income groups impacted by the outbreaks.”

Innes Willox, Chief Executive of Ai Group said: “Although input price pressures continued to accumulate, Australia’s manufacturing sector expanded again in June with solid increases in production and new orders and a slight lift in employment. While export sales were up, domestic sales fell reflecting the decline in consumer and business confidence in the face of concerns about inflation, interest rates and asset values. Selling prices were higher in June but by a smaller amount than input costs as less robust demand inhibited the ability of manufacturers to fully recover their higher costs in the market.”

Intraday bias in AUD/USD stays on the downside with focus on 0.6756/60 cluster fibonacci level. Strong support is still expected there to bring rebound. Break of 0.6918 resistance will indicate short term bottoming and turn bias back to the downside. However, sustained break of 0.6756/60 will carry larger bearish implication and target 0.6461 fibonacci level next. 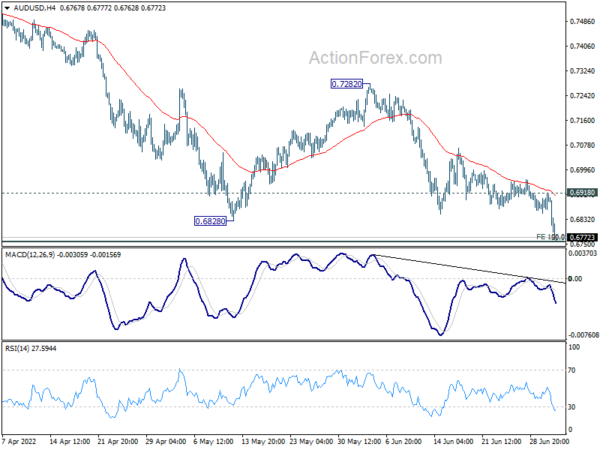 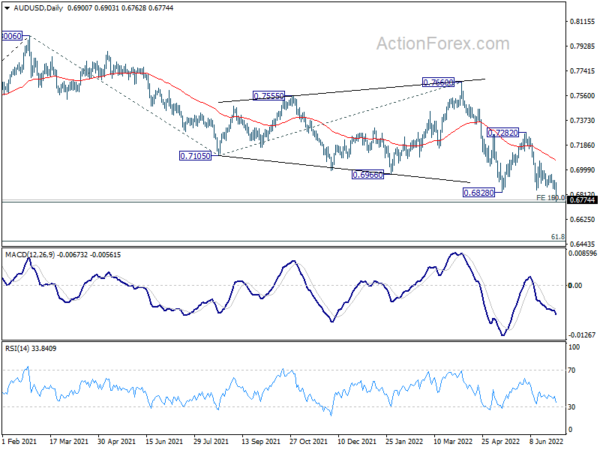