GBPJPY sharpened its downturn below the 20-day simple moving average (SMA) and a key support trendline on Friday, tumbling to a two-week low of 163.24.

The price is also set for a close below the 23.6% Fibonacci retracement of the 150.96 – 168.70 upleg at 164.53, which was indestructible over the past week, hinting at further weakness ahead. The momentum indicators are in favor of this bearish scenario, too. The RSI is crossing below its 50 neutral mark, the Stochastics are falling, and the MACD is losing steam below its red signal line. Besides, with the price trading some distance above the lower Bollinger band, the market has yet to reach oversold levels.

Sliding even lower, the pair may face congestion around the 50-day SMA and the tentative support trendline drawn from the 155.58 trough at 162.70. The 38.2% Fibonacci of 161.95 is adding more importance to the region. Hence, a move below that base is expected to produce another strong downfall, likely towards the 50% Fibonacci of 159.86 and the longer-term ascending trendline.

In brief, downside pressures are expected to persist in the near term, with traders likely seeking immediate support within the 162.70 – 162.95 territory. 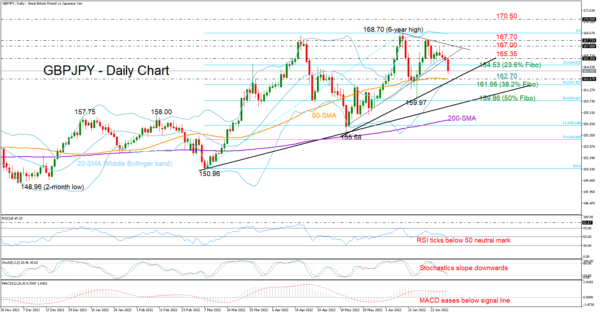