Euro drops sharply and broadly today on renewed concerns over recession on gas crisis. The common currency is also taking other European majors lower. Dollar and Yen are currently the strongest ones on risk aversion. Commodity currencies are also weak, with Aussie shrugging of RBA rate hike. Nevertheless, Canadian Dollar is relatively resilient

Technically, EUR/USD’s break of 1.0339 support confirms down trend resumption. One focus is now on when GBP/USD would follow and break through 1.1932 support. Another focus is whether Dollar’s strength is enough to power AUD/USD through 0.6762 low, and USD/CAD Through 1.3077 high. 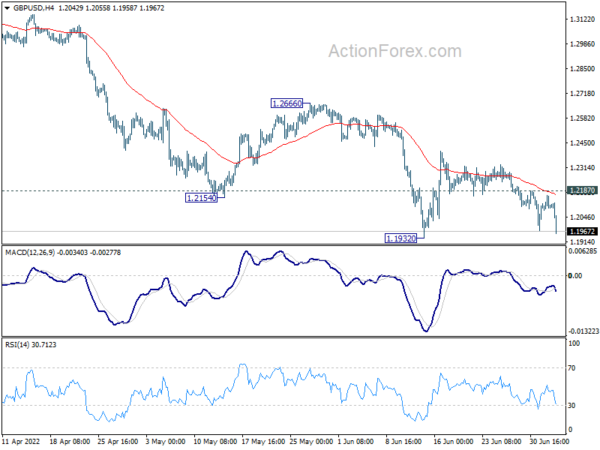 The selloff in Euro intensifies today on the back on heightening gas crisis, which could drag the economy faster and deeper into recession.

Norway’s Equinor is temporarily shutting down three oil and gasfields after workers went on strike. The Norwegian Oil and Gas Association has warned that could cut the country’s daily gas exports by 13%. The country has supplied 20-25% of gas demand in Europe. The disruption comes at time as the Russia is already weaponizing its gas supply after Europe responded to its invasion of Ukraine.

Tim Moore, Economics Director at S&P Global Market Intelligence: “The service sector remained in expansion mode during June, but persistently high inflation has started to dent discretionary spending and negatively influence demand projections across the board… June data highlighted the second-fastest rise in input prices since the survey began 26 years ago, driven by intense wage pressures and rapid increases in fuel costs… Service providers are casting a nervous eye over their sales momentum and forward bookings, which led to a slump in business activity expectations to their lowest since May 2020.”

Eurozone PMI composite finalized at 52 in Jun, risk of economic decline in Q3

Chris Williamson, Chief Business Economist at S&P Global Market Intelligence said: “The sharp deterioration in the rate of growth of eurozone business activity raises the risk of the region slipping into economic decline in the third quarter. The June PMI reading is indicative of quarterly GDP growth moderating to just 0.2%…

“The manufacturing sector is already in decline, for the first time in two years, and the service sector has suffered a marked loss of growth momentum amid the cost of living crisis…. risks have increasingly tilted towards the economy slipping into a downturn at the same time that inflationary pressures moderate but remain elevated.”

RBA raised cash rate target by 50bps to 1.35% as widely expected.  It also increased the interest rate on Exchange Settlement balances by 50bps to 1.25%.

It also maintains tightening bias. “The Board expects to take further steps in the process of normalising monetary conditions in Australia over the months ahead,” it said. The timing and size of future hikes will be guided by the incoming data and assessment of the outlook for inflation and the labor market.

RBA also pointed to “behaviour of household spending” as one source of domestic “ongoing uncertainty”. Global outlook “remains clouded” by war in Ukraine and the impacts of energy and agriculture prices. There are also ongoing uncertainties related to COVID, especially in China.

Also from Australia, AiG Performance of Construction dropped sharply form 50.4 to 46.2 in June.

NZIER said: “For the June quarter, firms saw activity in their own business remaining subdued. Besides the continued uncertainty over the COVID-19 outbreak, businesses are also grappling with the intensification of cost pressures and higher interest rates.”

China Caixin PMI Services rose from 41.4 to 54.5 in June, above expectation of 49.0. That’s the highest level since July 2021, signaling strongest upturn in business activity for 11 months. There were renewed increase in overall sales, despite slight drop in export orders. Inflationary pressures weakened. PMI Composite rose from 42.2 to 55.3.

Wang Zhe, Senior Economist at Caixin Insight Group said: “Overall, regional Covid outbreaks were put under control and restrictions were loosened in June, facilitating a gradual recovery in business operations. The supply side was the first to reflect improvements in production and logistics, while it will take more time to restore demand. The rebound in the services sector, which was hit harder by Covid outbreaks, was stronger than that of the manufacturing sector. Job creation lagged behind these positive developments, with the gauge for employment remaining in contractionary territory. Manufacturers still faced high cost pressure and profit challenges.”

EUR/USD’s down trend finally resumes and intraday bias is back on the downside. Next target is 1.0090 long term projection level. On the upside, above 1.0448 minor resistance will delay the bearish case and turn intraday bias neutral again. 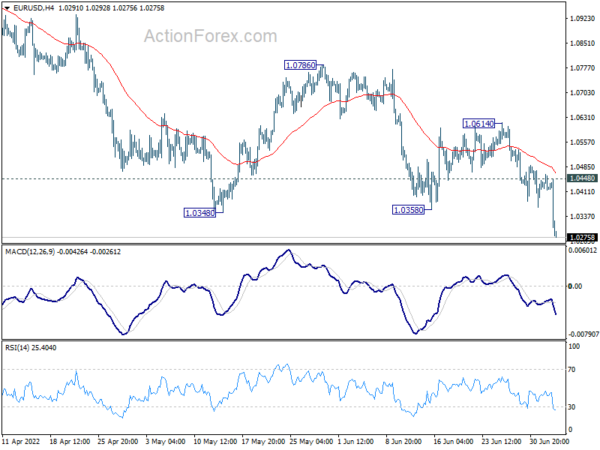 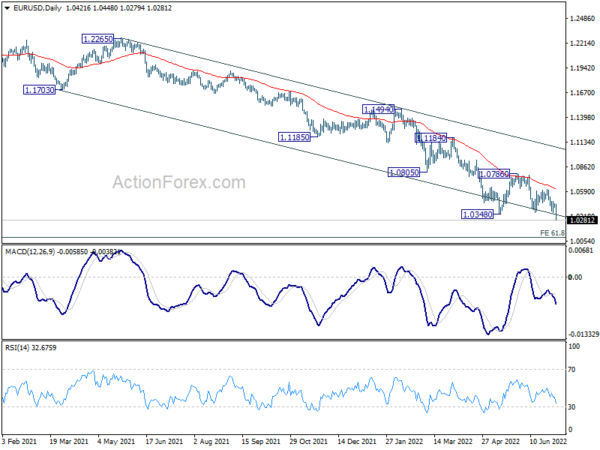 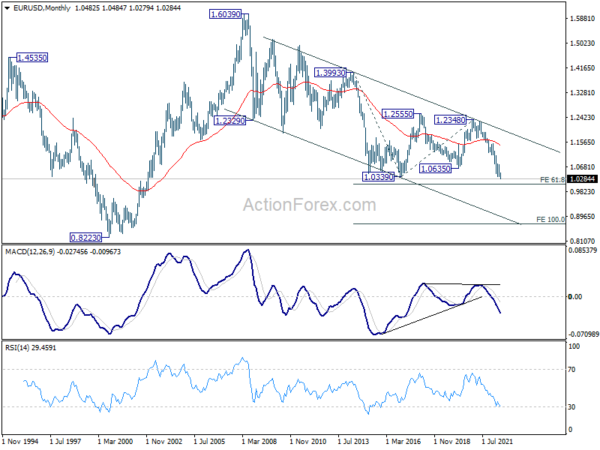