Euro Oversold, But Far from a Final Sell-off

The single currency fell to 1.0071 in the early European session on Friday. For EURUSD, it is a new low since December 2002 and a continuation of the massive sell-off that started last Tuesday.

Looking solely at the technical picture, the pressure on the EURUSD intensified after touching the 50-day average last Monday – the informal resistance line for the previous 13 months. The pair has been selling after several touches of this line since late February. 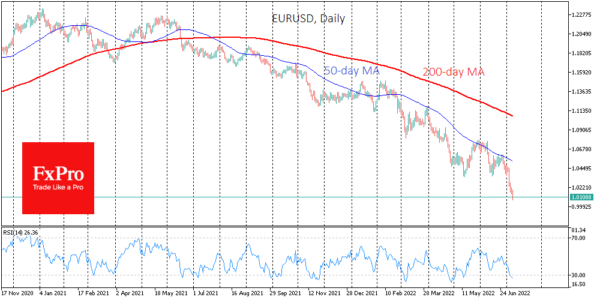 The parity is in a couple of steps, and so far, it is difficult to find any reason why the Euro might not fall below this psychological level. Furthermore, although the weaker Euro is pro-inflationary, policymakers in the Eurozone may see it as a tool for boosting export competitiveness.

Although EURUSD is over-sold in the short term on the daily charts, the pair’s break away from the trend has not been anything out of the ordinary in recent months, suggesting a relatively orderly sell-off.

The RSI index has entered oversold territory at weekly and monthly intervals. Contrary to the indicator’s logic, historically, we have seen an acceleration of the sell-off and not the rebound. 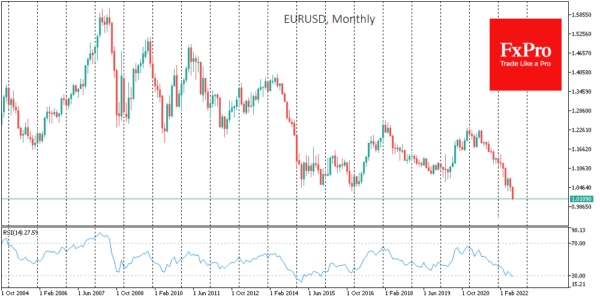 The Euro remains a falling knife, which is very dangerous to catch despite seeming oversold. The current strong trend is one of those cases where it is more prudent to wait for reliable signs of a reversal and not rush to “catch the bottom”.

EURUSD does not recover sharply from such devastating falls, as it is the most liquid pair, with tens of trillions of dollars in turnover. In 2000 and 2015, it took more than two years for the EURUSD to recover above levels where it fell into oversold territory on the RSI monthly charts in a month. A reliable signal, in this case, was the divergence of the price chart and the said index.

The following important stop for the EURUSD looks like the area of 0.97, where the pair might find itself before the end of the month. However, we should not be surprised if the decline continues up to 0.85-0.87 and lasts for another 2-4 quarters.