Recession became a much more popular word on the street this week. Revisions to first quarter GDP data and a weak spending report for May which came out at the end of last week revealed much softer consumer momentum in the first half of the year. This led many forecasters to downgrade their outlooks, with some calling for recession. TD Economics is not calling for a recession, but we acknowledge the downside risks have risen. As such, we have formulated an alternate economic profile on how a U.S. recession might unfold. 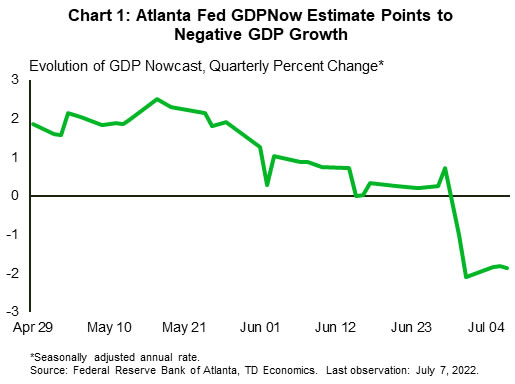 The Atlanta Fed’s GDP Nowcast is pointing to a second quarter of contraction in GDP in Q2 (Chart 1). However, two quarters of contraction in GDP is not enough to qualify as a recession according to NBER criteria – the economic body that defines recessions. In addition to economic output, it places a heavy importance on payrolls employment and real personal incomes less transfers. The income measure has certainly softened with high inflation in recent months but remains in expansionary territory. And the impressive June payrolls report confirmed that employment remained strong (Chart 2). The unemployment rate remained low at 3.6%, and average hourly wages were up a healthy 5.1% year-on-year, both pointing to tight labor market conditions. 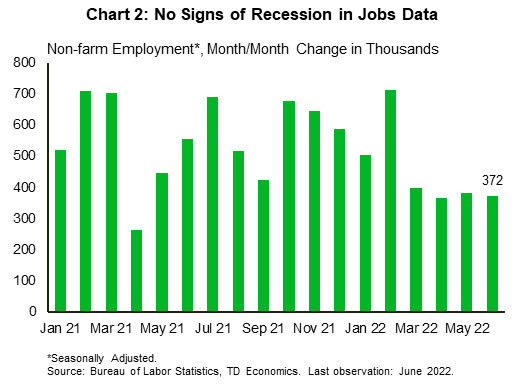 Putting aside healthy hiring through June, sentiment indicators are showing some softness. The Institute for Supply Managements’ (ISM) readings for the manufacturing and services sectors both slipped modestly. However, both sectors remained above the 50 threshold, which suggests that both remained in expansionary territory. The underlying details paint a slightly more nuanced picture. Both sectors showed an increase in current business activity, but in the manufacturing sector, the new orders index slipped into contractionary territory, while in the services sector it eased but remained solidly expansionary.

Another important message of the ISM reports is that prices paid by businesses continue to ease – a trend that corresponds with a recent reduction in supply chain bottlenecks. Indeed, the supplier delivery times have improved since the beginning of the year, especially in the manufacturing sector. According to the San Francisco Fed’s research, the distribution of price gains as measured by core PCE inflation is equally split between supply and demand factors, suggesting that cooling on the supply side should help ease inflation going forward.

In the meantime, minutes from the FOMC meeting in June showed that members are worried about the level of stickiness in price gains, and the rising possibility that high inflation is becoming entrenched in consumers expectations. This fear clearly overshadowed any concern the members might have had about prospects for economic growth, resulting in a rare consensus when deciding to supersize the rate hike to 75 basis points. The Fed is positioned for another supersized rate hike at the end of the month, as it focuses on tempering demand.

While the weather outside is hot, the temperature dial of the Canadian housing market continued to fall in June. Preliminary sales data from the regional real estate boards confirmed that higher interest rates are rapidly cooling Canada’s housing market. Home sales declined by varying degrees across the Vancouver (-10% m/m/), Calgary (8% m/m), and Toronto (-5% m/m) markets. From our perspective, there’s still more downside to the housing market through the second half of the year. This is particularly true across Ontario and British Columbia, where affordability remains exceptionally low and is likely to only worsen over the near-term amid quickly rising borrowing costs (forecast).

At first blush, things were also a bit cooler across Canada’s labour market in June, with employment falling by 43k jobs – more than reversing the gain in May (Chart 1). This marked the first monthly decline since January when hiring was impacted by Omicron. Job losses were concentrated in the service sector, mainly in retail trade (-58k). Despite the decline, the labour market remained extremely tight. The unemployment rate fell further in June, declining by 0.2 percentage points and reaching a new low of 4.9%. All in all, the job market in June is likely the victim of its own success: given the historically low unemployment and elevated participation rate, hiring was bound to slow at some point. 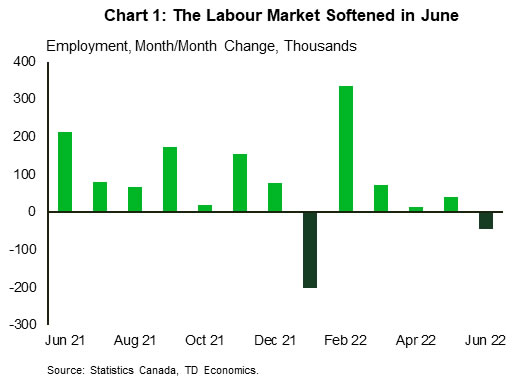 Amid the dearth of workers, wage growth continued to accelerate. Hourly earnings were up 5.2% on a year-over-year basis – a noticeable acceleration from the 3.9% y/y recorded in May. This echoes the results from the Bank of Canada Business Outlook Survey (BOS) released earlier this week, which showed that businesses were expecting to raise wages by 5.8% over the next twelve months, with the rising cost-of-living cited as an important driver of future wage gains. Indeed, both the BOS and its consumer-focused counterpart – Survey of Consumer Expectations – showed 2-year ahead inflation expectations moving notably higher in the second quarter to 4.8% and 5%, respectively (Chart 2). This implies that businesses and consumers expect inflation to be both higher and more persistent. 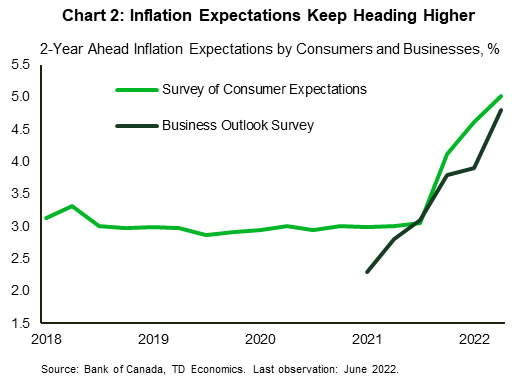 Rising inflation expectations and wages – the wage inflation spiral – are posing a challenge for the Bank of Canada, increasing the urgency to slay the inflation dragon before inflation expectations become even more unhinged. Falling home prices will likely help to revert some of the inflationary mindset among consumers. This week the average gasoline prices also edged lower, falling below $2/liter for the first time since the end of May. Still, with demand outstripping supply and the economy bumping up against labour constraints, we expect the Bank of Canada to stay the course of aggressive rate hikes and raise the policy rate by 75 basis points next week.