EUR/USD: Rising Pressure on Euro Suggests that Final Break Below Parity is Near

The Euro is hovering just above parity level for the third consecutive day, with this critical support being dented but bears were so far unable to break lower.

Limited upticks show that downside pressure is strong, though headwinds from parity manage to counter the pressure.

The single currency is at the lowest levels in two decades and overall picture is very negative, and its fate is mainly with the situation regarding the energy supplies.

The pair is down around 11% year-to-date and on track for further weakness in current economic and geopolitical conditions that may result in one of the biggest yearly drops in Euro’s history.

Higher than expected US inflation in June sparked speculations that the US Federal Reserve might act even more aggressively in its July policy meeting and opt for 1% rate hike, instead of widely expected 0.75% increase that additionally supports the dollar.

On the other side, the situation in European Union worsened further, according to the latest economic indicators, which signal that bloc’s economy is sliding into recession.

The core problem for the union is the energy supply and soaring prices of gas and oil that fuels inflation and the problem spills all over the economy.

The latest shut of gas supplies through Nordstream 1 pipeline, due to maintenance, undermined the Euro, with growing fears that shutdown may not be temporary, add to negative outlook, highlighting increased risk that the single currency may slump below parity and extend towards next target at 0.9607 (Sep 2002 low), with risk of deeper fall if the situation deteriorates on further rise of gas prices.

The European central bank is in difficult position, facing an important task to combat record-high inflation, which could worsen if the euro weakens further, but on the other side must be cautious as aggressive policy tightening could negatively affect the economic growth. 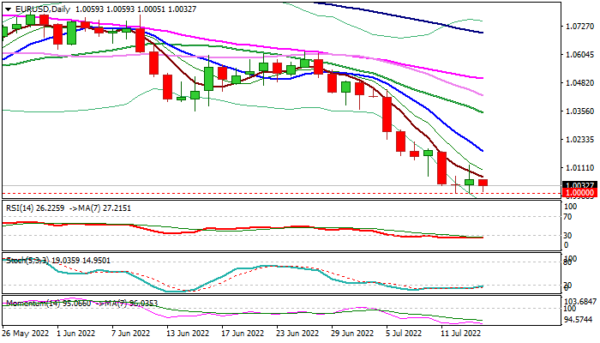