Euro Gets Crushed ahead of Inflation and GDP Numbers

It has been a brutal month for the euro. Business surveys already point to a recession and traders are worried Russia might cut off the gas and paralyze the economy completely. The upcoming batch of inflation and GDP data on Friday are unlikely to change this narrative. Instead, a turnaround in the euro will require either more energy supply to come online or US inflation to cool down and clip the dollar’s wings.

The euro’s nightmare keeps getting worse. An energy crisis has put the squeeze on consumers, who are struggling to cope with ever-rising bills and fuel costs. In fact, the Eurozone economy is already in contraction according to the latest business surveys and forward-looking indicators suggest the situation will get worse in the coming months.

Russia has essentially weaponized its gas supply – the mere threat of cutting it off has been enough to send European gas prices soaring as several countries scramble to stockpile as much as they can.

Even a forceful rate increase from the European Central Bank last week was not enough to turn the tide in the devastated euro. Traders have started to sense that Europe will be at the epicenter of any global recession, and higher borrowing costs will only add to those risks. The more aggressively the ECB tightens, the deeper the recession might be. 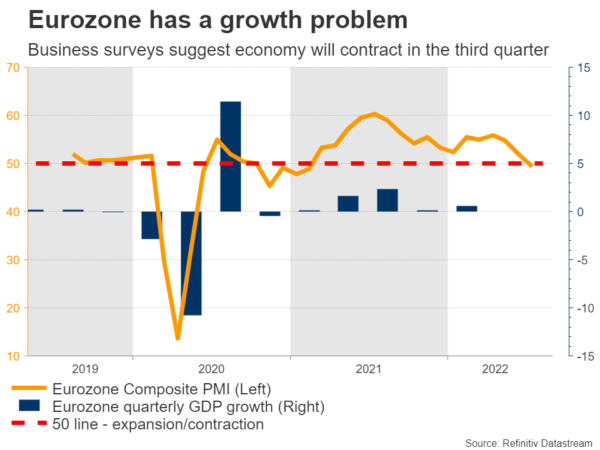 On top of everything, political risk is back on the table with Italy headed for early elections in September. It seems like far-right forces will be victorious, raising concerns of a sovereign debt crisis in the Eurozone’s third largest-economy.

On Friday, we’ll get the latest readings on inflation and GDP growth. Inflation as measured by the CPI is expected to have held steady at 8.6% in yearly terms in July, while the core rate that strips out food and energy items is projected to have risen to 4.7% from 4.6% in the previous month.

Hence, most of the inflation Europe has encountered so far has been concentrated in energy and food. That is horrible news for consumers that have to pay the higher prices, but good news for the ECB, as it implies that inflation is not very sticky. 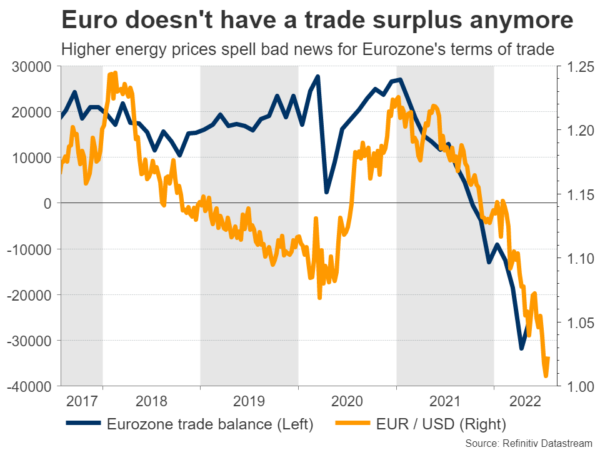 Meanwhile, GDP growth is expected to have slowed substantially, with the economy growing just 0.2% last quarter, from 0.6% previously. Admittedly though, this is old news. With business surveys pointing to a contraction in July, everybody knows growth was going downhill in Q2.

All told, the outlook for the euro remains gloomy. Even if the upcoming data is better than expected, it doesn’t change much. The ECB cannot raise rates much faster without breaking the economy, which is already losing power. And the euro has lost its biggest historical advantage – a massive trade surplus.

In these conditions, there isn’t much that can turn the situation around. The only factor that can really revive the euro would be a severe selloff in energy prices. However, this will only do the trick if prices are dropping because more supply is online, not because demand is collapsing in a recession.

In other words, we need some good news from Ukraine before the euro can stage a turnaround. Alternatively, a slowdown in US inflation that takes the wind out of the dollar might also enable a relief rally.

From a technical perspective though, even a relief rally towards 1.0600 in euro/dollar would not be enough to break the pair out of its downtrend – so much damage has been inflicted on the chart.

On the downside, a decisive break below the recent low of 0.9950 would signal a resumption of the trend.