EURGBP is recovering from three-month lows after yesterday sinking to 0.8339, suggesting that a new support base has been formed around 0.8340. This level is above the 78.6% Fibonacci retracement of the March-June uptrend at 0.8313 so it may provide only temporary support as the momentum indicators continue to point to downside risks.

The %K and %D lines of the stochastic oscillator have flatlined around the 20 oversold mark after a minor rebound, while the RSI remains well below the 50 neutral level.

However, the positive momentum could easily dissipate as the 20-day MA is about to cross below the 200-day MA. If EURGBP resumes its downtrend, the 78.6% Fibonacci of 0.8313 could stall the decline before the April trough of 0.8249 is reached. Breaching this would clear the way for a retest of the 5½-year low of 0.8202 set in March.

Summing up, the improvement in the short-term bias has some way to go before it turns bullish and at the minimum, the pair needs to reclaim the 0.84 handle. However, in the medium term, restoring the positive outlook that only recently switched to neutral will require a lot more work as the June peak of 0.8720 is some distance away from current price levels. 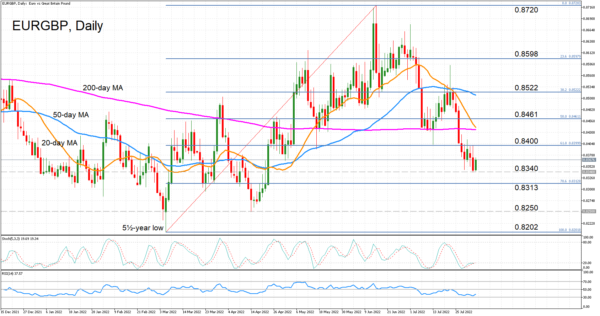