WTI oil futures (September delivery) have been losing ground since early June when the price failed to surpass the 121.00 mark. Although a further decline had been rejected multiple times by the 200-day simple moving average (SMA), the price managed to close below this important barrier, endorsing a broader bearish technical picture.

The momentum indicators suggest that near-term risks are tilted to the downside. Specifically, the stochastic oscillator is sloping downwards in the oversold zone, while the MACD histogram is currently below both zero and its red signal line.

Should the selling pressure persist, the recent low of 88.20 could act as the first line of defence. Sliding beneath that floor, the commodity could challenge 85.30, which has provided both support and resistance in the past, before 73.00 appears on the radar. Failing to halt there, the December low of 62.30 might prove to be a tough obstacle for the price to overcome.

On the flipside, the price could ascend to re-test the 200-day SMA, currently at 94.50. Conquering this barricade, the bulls could aim for the recent peak of 102.00 before the attention shifts to the 114.00 hurdle. An upside violation of the latter could open the door for the trend reversal point of 121.00.

Overall, the recent sell-off in WTI oil futures is likely to resume since the price managed to cross below the crucial 200-day SMA. Therefore, a break beneath the 88.20 floor could attract further selling interest, sending the price to form fresh multi-month lows. 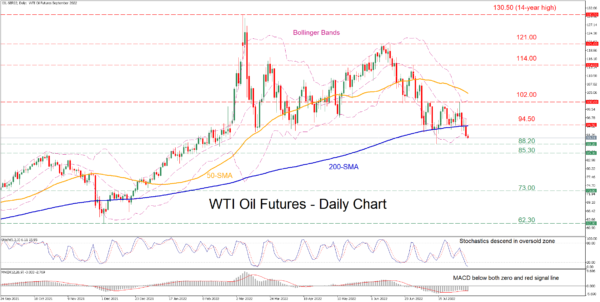