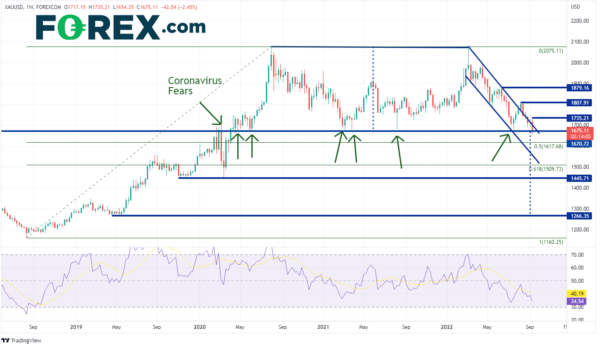 The focus for the markets this week will be on the FOMC meeting on Wednesday and the BOE meeting on Thursday. Both central banks are expected to high rates.

Monday will be the funeral for Queen Elizabeth II.  As a result, the UK will be on a bank holiday and the UK markets will be closed.  On Wednesday, the FOMC will meet to decide whether the Committee should raise rates in the US by 75bps or 100bps.  Although 75bps is expected, last weeks stronger than expected CPI data from the US has raised a few eyebrows among Fed watchers.  In addition, the BOE will meet on Thursday to decide how much it should raise rates?  Initial expectations were for a hike of 75bps,  however over the course of the last month,  expectations have dropped to a 50bps increase. Also, note that the FTSE reshuffle will occur this week.  It was expected to take place on Monday, however because of the bank holiday, it has been moved to Tuesday.

The Bank of England interest rate decision meeting was supposed to take place last week.  However, due to the passing of Queen Elizabeth, the meeting was postponed until this Thursday.  The BOE hiked rates by 50 bps at its August meeting to bring the key rate to 1.75%.  At the time, the BOE projected that inflation could rise as high at 13.3% in October and that it will remain elevated throughout much of 2023.  In addition, the central bank expected to enter a recession in Q4 2022.  The markets immediately moved to price in a 75ps rate hike at the September meeting.  However, last week the UK released CPI data which showed that inflation fell from 10.1% YoY in July to 9.9% YoY for August. In addition, due to the recent cap on energy prices, many economists are now expecting inflation to be lower than the estimated 13.3% in October.  The BOE will give an update this week.  Regarding the economy, the Retail Sales slowed considerably in August.  The headline print fell from +0.4% in July to -1.6% in August.  The expectation was for -0.5%.  The ex-Fuel print fell by the same amount.  Markets are now leaning towards a 50bps hike for the BOE this week.

THE FOMC is set to meet on Wednesday this week at its September interest rate decision meeting.  Expectations are for the FOMC to hike rates by 75bps.  Last week’s August CPI reading came in at 8.3% YoY vs 8.1% YoY expected and a prior reading of 8.5% YoY.  Although the print came in better than expected, it was the Core Inflation Rate that caught the markets attention.  Core CPI for August was 6.3% YoY vs an expectation of 6.1% YoY and a prior reading of 5.9% YoY.  Not only did the print beat expectations, but it was much higher than the reading in July.  This sent expectations of a 100bps rate increase into motion for this week.  At one point after the CPI release, expectations of a 100bps increase soared to nearly 50%.  However, cool heads seem to be prevailing, as now markets are only pricing in a 16% chance of a 100bps rate hike (which means markets are also pricing in an 82% chance of a 75bps hike).  The jobs numbers continue to impress, with August NFP at 315,000 and US Initial Jobless Claims falling for the 5th consecutive week to 213,000 for the week ending September 10th.

Its that time of the quarter: time for the FTSE reshuffle.  The reshuffle will take place on Tuesday due to the bank holiday on Monday, however it will be effective as of Monday.  The FTSE reshuffle is when the FTSE Russell calculates the valuations of UK companies to decide which stocks should be placed in which index.  Abrdbn, Hikma, and Howden will all be leaving the FTSE 100.

FedEx surprised the markets after the close on Thursday by removing its guidance for FY 2023, sending the equity markets lower on fears of a recession.  There are a few companies to watch this week.  Will they drop guidance as well?  The following are a few important earnings reports to watch this week:

Economic Data and other Central Banks

Last week, markets got a big surprise with the higher than expected CPI data from the US.  This week, could we see more surprises?  The obvious focus for the week will be on the FOMC meeting on Wednesday and the BOE meeting on Thursday.  However, there are other central banks to be on the lookout for as well this week.  They include the Riksbank, BOJ, SNB, Norges bank, and SARB. Any surprises from these central banks could cause volatility in their respective currencies.  In addition, Australia will release the Minutes from its last meeting, Canada will release its August CPI, and Flash Manufacturing and Services PMIs will be released.  Other major economic releases this week are as follows: Gold (XAU/USD) had put in a local low during the week of August 13th, 2018 at 1160.25.  For the next 2 years, the precious metal had moved aggressively higher and in August 2020, Gold made an all-time new high at 2075.11!  Price then pulled back and tested prior lows near 1670.  However, price began to run higher and during the week of March 7th, 2022 it tested the previous all-time highs and failed, forming an evening star formation on the weekly timeframe. Since then, Gold has been moving lower in a descending channel.  Last week, the precious metal tested the 1670 level once again, only to break it and make an intra-week low of 1654.25!  By breaking the 1670 level (the neckline), it set up a double top pattern on a weekly timeframe.  The target for a double top is the height from the double top to the neckline, added to the breakdown point of the neckline.  In this case, the target is near 1275, just above support from April 2019.  However, if price is to reach its target, Gold must first pass through the 50% retracement level from the lows of August 2013 to the highs of August 2020 at 1617.68.  Below there, price can fall to support at the bottom trendline of the descending channel near 1565 and then the 61.8% Fibonacci retracement from the previously mentioned timeframe.  However, if the break of the 1670 level proves to be a false breakdown, first resistance is at the highs of the week at 1735.21, then the highs from the week of August 8th at 1807.91.  Above there, Gold can move to the highs from the week of June 13th at 1879.16.

The focus for the markets this week will be on the FOMC meeting on Wednesday and the BOE meeting on Thursday.  Both central banks are expected to high rates.  However, both could surprise the markets and hike more than expected.  In addition, watch for possible volatility surrounding earnings releases this week, as well as the economic data from around the globe.  Also, keep an eye on spot gold to see if it can trade below 1670, and remain there.  If it does, Gold could be in for a big drop!