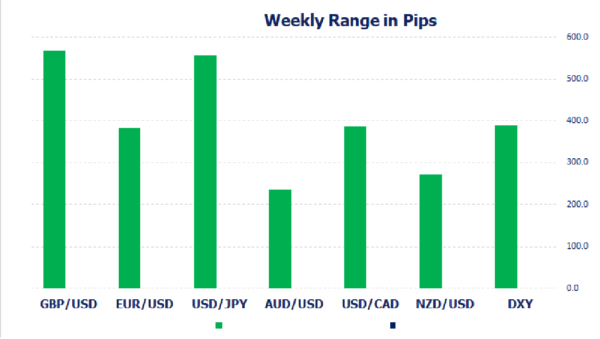 Last week, there were some major events that created quite a bit of volatility.  The most important events were the FOMC interest rate hike of 75bps to bring the Fed Funds rate to 3.25%, the BOE rate hike of 50bps to bring the key rate to 2.25%, and the BOJ intervention in the FX markets in order to stem losses in the Yen.  This week, markets should expect more fallout and volatility from these events.  In addition, the Pound was in a free fall on Friday after Chancellor of the Exchequer, Kwasi Kwarteng, released a crisis mini budget.  Will the selloff continue this week?  Also, it’s end of month and end of quarter this week! Watch the EU CPI flash report for September and the US Core CPI for August, both due out on Friday, to get the latest updates on inflation!

The US Fed hiked the Fed funds rate by 75bps to bring the key rate to 3.25%.  In addition, the Fed’s “dot plots”, which shows where Fed members think interest rates are headed, had an average increase of 125bps by the end of 2022.  This would presumable mean another 75bps hike in October and a 50bps hike in December.  The central bank also increased its inflation forecast and lowered  its GDP forecast.  Fed Chairman Powell stated during his press conference that his main message from Jackson Hole had not changed: “We will fight inflation until we get it back to 2%”. In addition, Powell stated that the Fed seeks to return to “sufficiently restrictive” rates. The Fed is still in aggressive hiking mode, even if it causes a recession.  This caused stocks and Gold to move lower, while the US Dollar and yields continued higher.  Will there be follow through this week, or will profit taking ensue?

The BOJ did nothing at its interest rate decision meeting.  It left rates unchanged at -0.1% and will continue yield curve control targeting 0.00% on 10-year JGBs. In addition, the BOJ noted that it does not need to change forward guidance for about 2-3 years and will patiently continue powerful easing.  Take away: The BOJ is extremely dovish and will continue to do whatever it takes to support Japan’s economy.  HOWEVER, just a few hours after the end of the meeting, the BOJ surprised traders by intervening in the FX market!  The BOJ bought Yen across the board as it sent a message to traders that it will not let the Yen depreciate further.  USD/JPY moved from a high of 145.90 to a low of 140.35, before recovering to 143.25 today. However, other Yen pairs, such as EUR/JPY, AUD/JPY, NZD/JPY and GBP/JPY continued that move lower today.  (USD/JPY closed near unchanged for the week). Will these moves continue over the course of the week, or will traders take profits on short positions?

The Bank of England also met this week and decided to hike rates by 50bps (to the dismay of some traders who were hoping for a hike of 75bps), bringing the key interest rate to 2.25%.  The vote was not unanimous though, as 3 members voted for a rate hike of 75bps. Recall that the UK currently has inflation hovering near 10%. However, the BOE reduced its inflation forecast to just under 11% from over 13% (in October) due to the new administration’s Energy Price Guarantee.  The central bank also voted unanimously to begin reducing the amount of debt it owns in UK government bonds. In addition, the BOE said that due to the bank holiday last week, the UK may already be in a recession.  However, the BOE doesn’t seem to be of the same mind as the FOMC, as it is concerned about the impact of a recession, particularly one caused by an energy crisis.  Reaction was muted for the GBP at the time.

Pound gets Pounded;  Will it continue?

On Friday, the new Chancellor of the Exchequer, Kwasi Kwarteng, announced a new budget around tax savings and capping energy bills.  However, investors are troubled as to if these plans will be fully funded.  The BOE said that it is hiking rates and going to begin selling its government bonds.  If the budget is not fully funded, the government is going to have to issue new bonds, at extremely high rates, in order to cover costs.  UK 10-year Gilt yields climbed to the highest level since February 2011 near 3.84%, while 2-year Gilt yields crossed above 4% for the first time since 2008. As a result of the lack of faith in the new government, the Pound was pummeled. GBP/USD fell nearly 400 pips to 1.0865 (its lowest level since 1985), while EUR/GBP climbed 175 pips, above 0.8900 (its highest level since January 2021). Will this move in the GBP continue this week?

Believe it or not, this week is the end of Q3.  That means that earnings season is right around the corner! However, there are still a few names releasing this week as Q2 earnings wind down. Some of the more important earnings to be released this week are as follows:  NKE, MU, BOO, NXT BBBY, and BB.

Last week, the macroeconomic picture was centered around central banks.  Data releases will be light this week, with exception of usual end of month data.  In particular, markets will be focused on inflation data on Friday, in the form of the EU CPI Flash for September and the US Core PCE for August.  In addition,  the Central Bank of Mexico (Banxico) will meet on Thursday and China will release its NBS Manufacturing and Non-Manufacturing PMIs.  Other important economic data to be released is as follows:

Chart of the Week: Weekly ranges for major FX Pairs What a crazy week it has been for the markets, in particular, the FX markets!  Despite the BOJ intervention, GBP/USD led way with the widest range on the week at 567 pips!  Price opened the week at 1.1461 and closed the week near the lows at 1.0865!  This is the lowest level since 1982! Behind that was the BOJ inspired USD/JPY.  The range on the week for the pair was 555 pips, with price closing at 143.28, a mere 38 pips above the open for the week!  The FOMC meeting and subsequent rate hike helped the DXY to trade in a range of 387 pips, closing near the highs of the week near 113.00.  EUR/USD traded in a 382 pip range, closely mirroring the DXY and closing near the lows of the week at 0.9695. The DXY closed at its highest level since 2002, while EUR/USD closed at its lowest level since 2002.  USD/CAD traded in a 385 pip range, also closing near its highs at 1.3588.  NZD/USD and AUD/USD followed close behind with ranges of 272 pips and 236 pips, respectively.

Will this week be as volatile and chaotic as last week?  Will markets continue with last week’s trend, or will there be profit taking along the way?  Next week marks the end of the quarter.  Watch for month end activity as well as quarter end activity as we get closer to the end of the week (such as pension fund rebalancing).  In addition, the EU CPI and the US Core PCE are bound to cause volatility on Friday.  Manage risk accordingly.