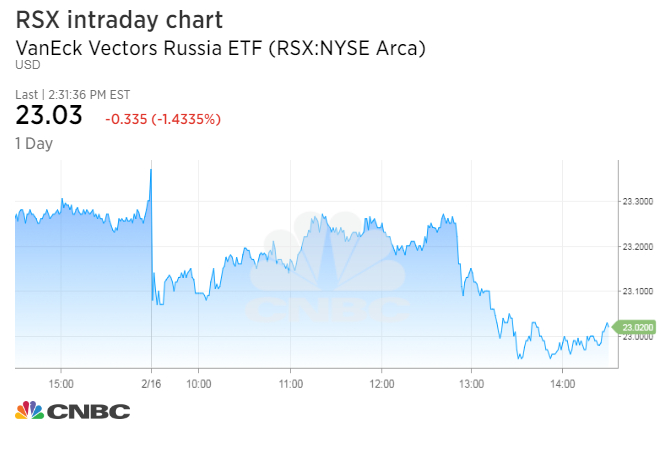 The VanEck Vectors Russia exchange-traded fund (RSX), which tracks a host of publicly-traded Russian companies, fell 1.6 percent following news of the indictments. The fund is largely comprised of energy and financial companies, according to FactSet.

The downturn appeared to reflect investor fears over souring U.S.-Russia relations and that the latest developments could force President Donald Trump’s hand in enforcing sanctions.

Trump has been reluctant to enforce additional sanctions on Russia despite a new law designed to punish Moscow’s interference, saying that the measure was already taking a toll on Russian companies.

Known as the “Countering America’s Adversaries Through Sanctions Act,” the legislation called for the administration to deliver a report on Russian President Vladimir Putin’s hierarchy in and out of the Russian government in an attempt to spook political opponents.

The administration delivered a list of Russian “oligarchs” in January, though the document came under fire after Forbes went through the lists and confirmed that it was an exact replica of the Russians on its 2017 billionaires list.

Still, special counsel Robert Mueller’s latest indictments mark the latest in an investigation that has kept markets on edge.