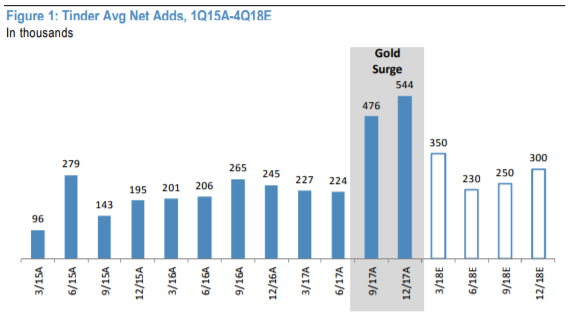 Dating app Tinder could see new user growth cut in half by the end of June unless it gets more kindling, J.P. Morgan said Wednesday.

Shares of Tinder parent Match Group notched a closing high on Tuesday after swelling nearly 150 percent over the past 12 months, far outpacing the broader market. The company introduced a premium subscription for Tinder users last fall — called Tinder Gold — that included a number of exclusive offerings to users.

The company has more room to increase paid subscriptions, but “we expect Tinder net adds to trend down in the first half of 2018,” Anmuth wrote in a note to clients. “Tinder’s highly successful Gold launch in late August/early Sept 2017 accelerated subscriber growth, driving more average net adds in the third and fourth quarters of 2017 than any prior quarter, with Tinder adding one million average net adds in just six months.”

“We believe Tinder’s peak Gold surge is now behind.”

Thanks to Gold’s suite of offerings, Tinder’s user growth skyrocketed during the past half year, jumping to 476,000 in the third quarter and 544,000 in the fourth. But Anmuth cautioned investors that people aren’t likely to continue to join Tinder at that rate; he now expects the app to add 350,000 users in the first quarter and 230,000 in the second, less than half of last quarter’s figure.

Anmuth did note, however, that the company expects a big Tinder product later in the year.

Anmuth reiterated his $42 price target on Match Group, implying little change in the stock’s value over the next year. Shares fell 0.45 percent Wednesday to close at $41.91.